An increasing number of building manufacturers are getting the word out about their commitment to the environment as they learn it really matters—especially to millennials.

More publicly traded corporations are taking action to improve the environment. They also want people to know about it. According to a study by the Governance & Accountability Institute (G&A), 65 percent of the companies included in the Russell 1000 published sustainability reports in 2019, up from 60 percent in 2018. The finding marked the eighth straight year of increase, the institute notes.

Most large companies are now on the green bandwagon. Researchers found that 90 percent of the largest 500 companies in the index published sustainability reports in 2019, an increase from 86 percent in 2018. The smaller 500 companies publishing reports rose from 34 percent in 2018 to 39 percent over those years, according to G&A.

“While sustainability reporting by [mid- and smaller-sized] public companies has lagged behind that of [larger] companies, our research shows that reporting by smaller companies is accelerating,” says G&A co-founder Louis Coppola. 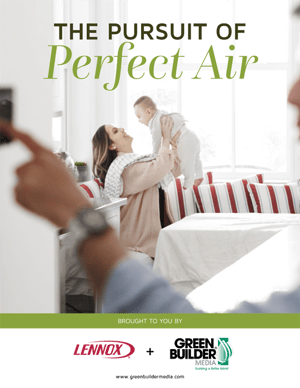 Green Builder Media has seen the same uptick. “We’ve noticed an increase in sophisticated corporate sustainability messages being rolled out via ebooks, webinars, and as part of larger thought leadership initiatives,” says CEO Sara Gutterman. “This information used to languish in corporate annual reports; now it’s as prevalent as new product announcements. It’s smart, too, because as our research on today’s home buyers shows, people really do want to buy green products from environmentally focused companies.”

One example of this new genre of messaging can be found in Lennox’s recent outreach, which is a sophisticated hybrid of product rollout and education about the company’s commitment to the planet.

“Consumers are increasingly aware of how their purchasing impacts the environment in the long term and are more willing to invest in something that will have an impact,” says Eric Zito, Director, Product Management - Heating for Lennox. “Homeowners know the HVAC system is the primary energy consumer in the house. They also know that having more efficiency can make a positive impact on the environment.” Read the Lennox report here.