OLDER, UNCERTIFIED wood stoves produce 30 to 50 grams of particulate per hour, contributing to asthma and a host of other health issues. The internal design of wood stoves has changed entirely since the EPA issued standards of performance for new wood stoves in 1988. Today’s wood stove models feature improved safety and efficiency; they produce almost no smoke, minimal ash and require less firewood. 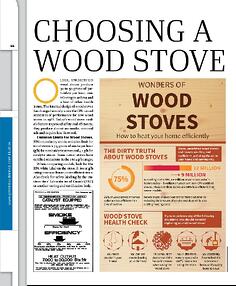 Emission Limits for Wood Stoves.
EPA’s mandatory smoke emission limit for wood stoves is 7.5 grams of smoke per hour (g/h) for non-catalytic stoves and 4.1 g/h for catalytic stoves. Some newer stoves have certified emissions in the 1 to 4 g/h range;.

When comparing models, look for the EPA white label on the stove. A lower g/h rating means a cleaner, more efficient stove. Also check for safety labeling by the Underwriters’ Laboratories of Canada (ULC) or

another testing and certification body.

Types of Wood Stoves
The two general approaches to meeting the EPA smoke emission limits are non-catalytic and catalytic combustion. Although most of the stoves on the market are non-catalytic, some of the more popular high-end stoves use catalytic combustion. Because they are slightly more complicated to operate, catalytic stoves are suited to people who like technology and are prepared to maintain the stove properly, so it continues to operate at peak performance.

Non-Catalytic Stoves. Three components make these stoves efficient: firebox insulation, a large baffle to produce a longer, hotter gas flow path and pre-heated combustion air introduced through small holes above the fuel in the firebox. The baffle and some other internal parts of a non-catalytic stove will need replacement from time to time, as they deteriorate with the high heat of efficient combustion.

Catalytic Stoves. These stoves produce a long, even heat output—thanks to catalytic combustion—in which the smoky exhaust is passed through a coated ceramic honeycomb inside the stove where the smoke gases and particles ignite and burn. All catalytic stoves have a lever-operated catalyst bypass damper, which is opened for starting and reloading. The catalytic honeycomb degrades over time and must be replaced; it can last more than six seasons if the stove is used properly. If the stove is over-fired, if inappropriate fuel is burned, or if regular cleaning and maintenance are not done, the catalyst may break down in as little as two years.

Wood Matters. Dense or “hard” wood contains the most energy per cord and is the best choice for peak winter conditions. Burning softer woods during swing seasons keeps rooms from overheating. Regardless, wood should be dried and stored for at least two years before burning. Source: EPA 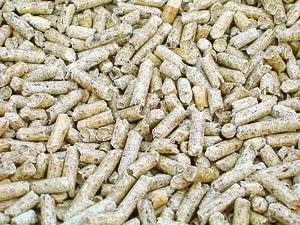 Pellet Stoves Pellet stoves use compressed pellets (made from wood or other biomass) for fuel and can be used in either fireplace inserts or free-standing stoves. They are categorized into two types, based on the pellet delivery system. Top-fed pellet stoves direct pellets into the combustion chamber from the hopper at the top of the stove. The combustion chamber is more likely to be filled with ash and other debris. Bottom-fed pellet stoves feed pellets into the combustion chamber from the bottom and automatically push the ash into the ash pan. Cleanup is typically easier because of the larger capacity of the ash pan. Pellet stoves are easy to operate and maintain. Unlike wood stoves, pellet-burning involves no cutting, less hauling, no splitting, stacking or waiting for wood to dry. If used correctly, pellet stoves produce very little smoke or creosote, which can cause chimney fires.