ADVANCED FRAMING TECHNIQUES that reduce the amount of framing in stud-framed walls improve their thermal performance. There’s more room for insulation, and thermal bridging—the heat transfer that happens through wood framing and extends from the inside surface to the outside surface of the wall—is reduced. Unfortunately, builders have been slow to adopt advanced framing methods because the techniques are nonstandard, and because implementation can require design and materials changes. A Building America team, the Partnership for Home Innovation (PHI), led by the Home Innovation Research Labs, have tested three advanced framing techniques that improve the thermal performance of the building enclosure, reduce the cost of energy-efficient construction and simplify the construction process. 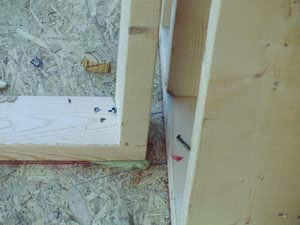 Rim Joist Window Headers
In two-story homes, the space above the first-floor windows and doors is often composed of solid wood—such as two or three 2’ x 10’s or 2’ x 12’s—to equal the thickness of the wall. Traditionally, the solid header has been justified to adequately support the building load. Research shows that the rim joist for the second floor, which typically sits about one to two feet above the window frame, has adequate structural strength to support building load; therefore, no additional framing—other than the king studs on each side of the door or window—is needed to carry the load. The space above the door or window is left open and can be insulated like the rest of the wall. This technique saves time, labor and materials costs, while adding to the overall thermal performance of the wall. 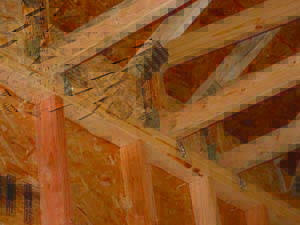 Continuous Sheathing for Raised Heel Trusses
For builders used to building with standard trusses, using raised heel trusses could seem complicated, time consuming and expensive. Concerns about adequate support led builders to install blocking at each rafter bay to hold the trusses in place—a difficult, labor-intensive job. Home Innovation Research Labs found that a simpler solution provides adequate support: installing oversized OSB wall sheathing that extends up along the back of the raised heel, providing bracing for the trusses. The sheathing layer doubles as a wind baffle, allowing the insulation to fill the space above the outer walls to full height without spilling over into the soffit vents. Air flow is still provided through the space between the roof rafters above the top of the sheathing. This solution saves time and money by eliminating the separate steps of installing blocking and baffles, and provides some wind uplift resistance. The only additional cost is the purchase of taller OSB panels, but 9- and 10-foot lengths are readily available. 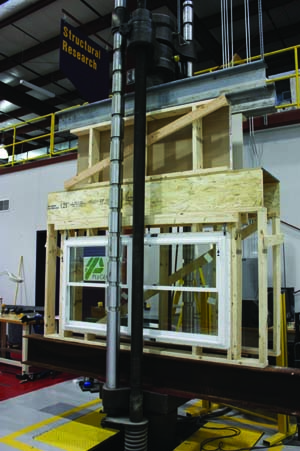 Testing the Integrated Rim Header The NAHB Research Center, through the Building America program, embarked on an effort to validate design calculations to transfer the design loads via an integrated rim header, without negative effects on the window opening. The evaluation was performed in conjunction with a national builder, K. Hovnanian Homes.

The integrated rim member and supporting wall framing were designed to resist the loads at the first floor level of a 20-foot-wide, two-story home with a center bearing wall and a ground snow load (Pg) of 50 psf. Specimens were tested in a Universal Testing Machine with an automated programmable computer control. Load was applied at an approximate rate of 0.1 inches/min of displacement; at each load level, the target load was held for 5 minutes, so the specimen could be visually inspected and the functionality of the installed windows evaluated. The integrated rim header system successfully limited deflections and maintained window serviceability throughout all tested load levels.