The Back Story: Labor, Materials and Land Costs

The triple impacts of a labor shortage, rising material costs and out-of-sight land costs has dramatically limited the number and types of new homes being built.

Home building has undergone massive changes over the last few years. Far fewer homes are being constructed now, at far higher price points. Home ownership has declined, renters are on the rise. Scarcity of housing, especially in urban markets, has inflated rents and home values, leaving a large segment of the population on the sidelines.

There’s plenty of blame to go around for the lack of construction laborers. First, there was the building boom, followed by the recession. According to the National Association of Home Builders (NAHB), about 1.5 million workers left the industry between 2007 and 2009, and many never came back.

Housing starts (single- and multi-family) have picked up to a pace of 1.2 million a month, more than twice as many as at their trough in April 2009. However, the number of nonsupervisory workers in residential construction has increased by only 40 percent since 2011.

The immigrant labor issue is a complex one. The Los Angeles Times, for example, asserts that the reason immigrant labor became so important in homebuilding was because contractors and their corporate clients, for 10 years, worked hard to undercut unionized labor—and immigrants rushed in to fill the gap at a lower cost per hour.

The reality, of course, is that many immigrants—legal and otherwise—such as tile setters and roofers, offer extreme proficiency at low cost. They’ve been the backbone of the building industry for more than a decade. They keep the building timeline on track by meeting or exceeding project deadlines, which increases builder profits.

Skilled trades, immigrant and otherwise, have also become scarce. According to The Washington Post, global staffing firm Manpower Group reported that skilled trade vacancies are the hardest jobs in the country to fill. Skilled trades (electricians, carpenters, welders, bricklayers, plasterers, plumbers, masons and more) have maintained the No. 1 position in vacancies from 2010 to the present.

According to the Dallas Builders Association, the labor shortage alone has added $6,000 to the cost of a new home, due primarily to delays in completion.

Given this scenario, reducing the overall need for labor has become an important goal to those companies that survived the last recession. This has loosened the normally conservative approach to building systems and products. Structural Insulated Panels (SIPs), Insulated Concrete Forms (ICFs), and less-known panelized systems, for example, are getting a long overdue second look.

Along with lack of workers, other forces have made alternatives to stick-built homes more attractive. For example, according to the NAHB, President Trump’s tariffs on Canadian lumber alone have added another $9,000 to the cost of each new home. And it’s not just lumber. The tariffs have had a ripple effect on engineered wood products, including plywood and cabinets.

The silver lining to higher material costs is that it’s become incentive to try alternative systems. 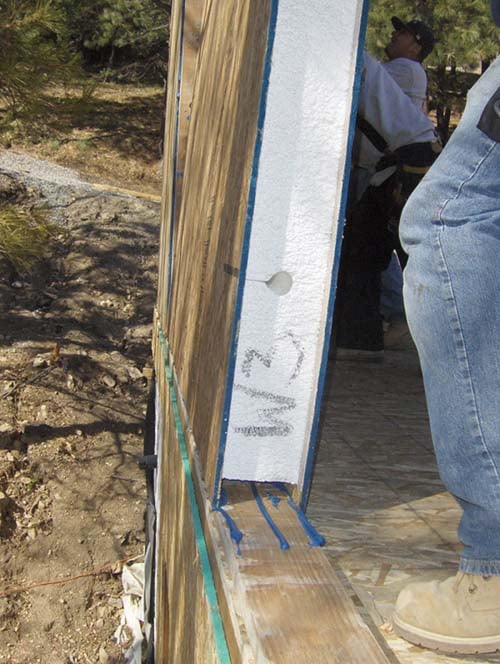 Precut chase cavities in this Premier SIP will save electricians from drilling hundreds of holes through stud framing.

SIPs, for example, have seen a marked increase in market share. The ability to buy Oriented Strand Board (OSB) in bulk has largely shielded SIP makers from major price hikes. Add to that the labor savings for new home construction with SIPs, and these products have actually benefitted from the political climate.

By some estimates, builders may save as much as nine days of labor per home on framing and inspection time on a 2,500-square-foot home built with SIPs, compared with conventional framing, according to the Structural Insulated Panel Association (SIPA). The Association compared SIP construction with typical stick framing, and found that “the reduced time for framing, electrical, and insulation labor saved $3,440 per home.”

The biggest learning curve for stick frame builders switching to SIP systems may be the level of planning. To use SIPs most efficiently, panels must be sized and built in the factory, and should include important details such as electrical and plumbing chases.

This results in a zero-waste jobsite, and close tolerances for all parts of the envelope. This, in turn, reduces the labor required to achieve the necessary air sealing for zero net energy performance.

Makers of Insulated Concrete Forms (ICFs) also have attracted new clients, thanks to material and labor pressures. HUD estimated back in 1998 that an ICF home (prior to the current labor shortage) would cost about 3 percent more than stick framing with 2-by-6 lumber.

Other, more-recent estimates put the cost difference lower. Concretebuilding.org suggests that building walls of ICFs adds $1 to $4 per square foot over stick framing. But since ICF buildings are more energy efficient, the heating and cooling equipment can be smaller than in a frame structure. This can cut the cost of the final building by an estimated 75 cents per square foot, so the net extra cost is about 25 cents to $3.25.

That cost gap for materials has closed as lumber prices have risen. But the real value in ICFs, according to advocates, may go to the homeowner, not directly to the builder. For example, concretenetwork.com suggests that in reality, “you may save money by building with concrete when you factor in lifecycle costs, utility and insurance savings, maintenance requirements and overall health of the occupants.” 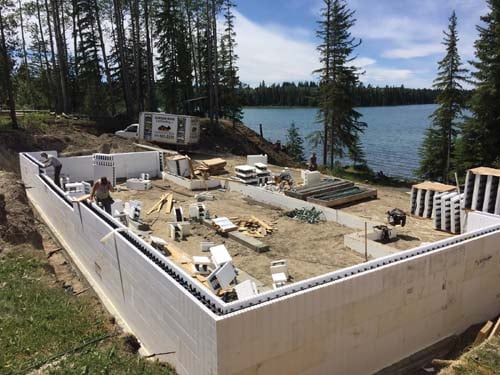 ICFs are also appealing because of their extreme resilience in hurricane and flood events.

The only caveat with ICFs is that detailing involves many additional components. For example, finishing doors and windows, sealing penetrations, bracing for the pour and so on add time and expense.

Here’s what one experienced builder noted as “extras” associated with an ICF project:

Different ICF products, of course, have their own solutions for some of these detailing needs, and you may be able to reduce or avoid certain extras if the ICF maker has integrated a solution into the products. But the point is that erecting an ICF home is not simply a matter of stacking hollow blocks and pouring cement. If you plan to use unskilled labor and switch to ICFs to get around the labor shortage, you probably won’t achieve the immediate price parity or time savings over stick framing.

As your crews become more experienced, however (based on the experience of other builders), your labor hours should shrink and the ICF option becomes more efficient in terms of your scheduling and costs.

Of course, it’s not just lumber and OSB that have seen price escalation, and not every material has an equitable replacement. For example, metal roofing is hard to beat in terms of durability and performance. But higher steel costs have forced builders into a corner: pay more for metal, or switch to less-sustainable products such as asphalt.

This choice, at best, leads to builders passing on the additional costs to the buyer, and feeds into the bigger issue of ballooning home costs. Higher material costs create yet another obstacle to affordable housing. 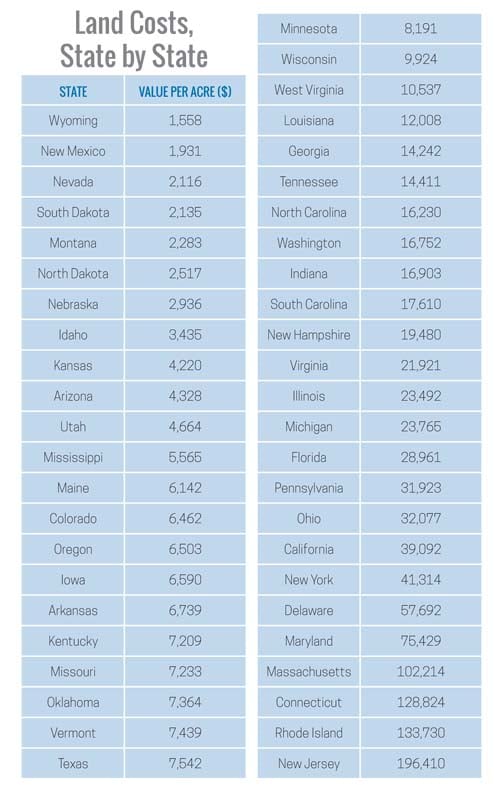 The final pressure in the trifecta of forces driving home prices up is land. Historically, land almost always increases in value over time. It’s a favorite safe haven for investors. A comprehensive study of the value of land used for construction of housing found that land prices increases have actually outpaced home price hikes since 2012.

A less-sophisticated analysis of the average cost per acre in each state (see sidebar) is also revealing. While some of the data is intuitive (e.g., New Jersey has high land costs, because it’s a small state with a large population), other data is less predictable. For example, land in Texas remains comparatively affordable, despite that state’s rapid and ongoing growth. Certain regions, such as Central Texas (greater Austin) are among the nation’s “hottest” areas with regard to home sales.

Urban areas have seen the greatest increase in land value. This is in part because desirable metro areas have begun to reach their maximum buildout, based on local zoning, to the point that teardowns often offer the only viable way to break into an existing neighborhood.

But higher land costs can’t always be pinned on population pressures. Often, archaic zoning has locked out a significant area of buildable properties.

For example, in Portland, Maine, dozens of unrecognized streets, sometimes called “paper streets,” have stymied homebuilders. The issue is related to the building code. In the mid-1980s, planners added a clause to the local code that requires any would-be developer to upgrade the entire street with curbs and pavement before adding even one new home.

Ironically, many of these unofficial streets are already maintained by the city, with snow and trash removal, and water and electric services on hand—and existing homes in place.

Green Builder Media analyzed one neighborhood in Portland, the Riverton area. By combining Geographic Information System (GIS) mapping with city records, we counted 300 empty, potentially buildable parcels in this small area alone. This suggests that there may be room for many times that number of new projects, if the building code were changed.

Instead, one of the handful of legally “buildable” lots in the city sold recently for about $90,000.

Portland is just one example of how outdated codes and rules have made the housing crisis worse. But unlike labor and material costs, it’s an area where building pros can make their voices heard, and push for solutions that could make other types of housing possible.