The Age of Fire

Experts say that we have ten years to change our ways before we enter into the Pyrocene, a new “fire age” induced by human activity that threatens to unhinge the planet.   Will the 2020’s marshal innovation that solves for the impending climate emergency, or will the next decade witness our dystopic demise, brought about by a Faustian agreement resulting from our greedy and short-sighted addiction to fossil fuels?

In 2015, Arizona State University professor Stephen Pyne coined the term, Pyrocene, describing a new Fire Age—the opposite of an Ice Age—resulting from our fossil-fuel based combustion economy.

“By burning fuels from deep time,” says Pyne, “we are redefining the options available for generations to come. We are taking carbon from lithic landscapes of coal and petroleum buried in the geologic past, passing it through today’s living landscapes, and releasing it into the geologic future. Little of the planet is unaffected.”

He avows that human activity has created conditions (extreme heat, superstorms, wildfires, and prolonged drought) that favor fire, which is turning “the atmosphere into a crock pot and the oceans into acid vats”, sparking a sixth great extinction.

Pyne asserts that the excessive amount of greenhouse gasses in the atmosphere, in conjunction with the disruption of the natural fire cycle in forests, prairies, and other ecosystems caused by human development, has yielded a “performance enhancer” effect for fire, metamorphosizing moderate fire events into massive catastrophes. 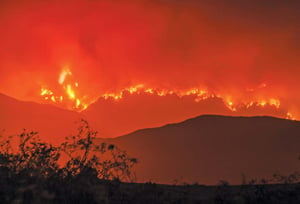 The Pyrocene, he says “is not just about the bad burns that trash countrysides and crash into towns; it’s equally about the good fires that have vanished because they are suppressed or no longer lit.”

Even Dante would have been alarmed by Pyne’s outlook for the future.  He predicts that “we’re headed into a no-narrative, no-analogue future.  So immense and unimaginable are the coming upheavals that the arc of inherited knowledge that joins us to the past has broken. There is no precedent for what we are about to experience, no means by which to triangulate from accumulated human wisdom into a future unlike anything we have known before.”

And yet, he admits to a modicum of silver lining: “Left to itself, it seems the Earth would slowly spin into another glacial epoch. It might be that only our fire habits, however inadvertently, however much entangled in the unsavory bond that joins us to fossil-fuel combustion, are preventing a planetary winter from returning,” he asserts.

But, in truth, it’s hard to find solace when contemplating that global warming may be fending off an ice age, as climate change wreaks havoc on communities and ecosystems across the globe, displacing vast populations of people and animals, costing trillions of dollars, and triggering mass extinctions.

Over the last decade, atmospheric carbon dioxide increased by approximately 25 parts per million, and it continues to rise at a dramatic rate.  The United Nations’ Intergovernmental Panel on Climate Change has indicated that 430 PPM is the absolute tipping point for life as we know it, and that we have ten years to transform our entire socioeconomic system before we reach a point of no return.

Which begs the question: do we have enough imagination, political will, and time to reverse course before we hit a full-blown Fire Age?

While the landscape is, no doubt, bleak, there is reason for hope.

One bright spot: the generating capacity of coal-fired power plants, the most polluting and carbon intensive source of energy, decreased by approximately 80 gigawatts (enough energy to power 43 million homes) in the U.S. over the last decade.  True, coal’s decline can be attributed more to the rise of fracking and natural gas than to renewable energy or clean energy policy, but its demise—at least in the U.S. and Europe, is inevitable (with that said, the future of coal will ultimately depend on decisions made by China and India, who continue to rely significantly on the dirty energy source.)

And while fossil fuels (mostly oil and gas) continue to comprise the vast majority of our nation’s energy mix, renewable energy his hit a tipping point: in the past decade in the U.S., solar photovoltaic installations grew by 900% and wind energy production tripled.

Another point of encouragement: the siege against climate science may be nearing an end, as indicated by the Environmental Protection Agency Scientific Advisory Board’s recent letters questioning the current administration’s rollbacks of environmental policies—namely, the clean water act, clean air act, and vehicle emissions regulations.

The Board, comprised of 41 scientists, many of whom were appointed by President Trump, found that the EPA’s proposed regulatory changes “flew in the face of science” and showed “significant weaknesses in scientific analysis.”

Peter Wilcoxen, professor of public administration at Syracuse University, reported that, the proposed rollbacks “ended up with a result that basically violated introductory economics.”

And more reasons to be optimistic as we turn the corner into a new decade:

In the face of the Pyrocene era, let us have faith that Greta, Time ‘Person of the Year’ Nobel Peace Prize nominee, and her peers, can guide us out of the fire and into a future that is defined by sunlight, clean air, fresh water, collaboration, social equality, and joy.

To learn more about how we can avoid a full-blown Fire Age, join Green Builder Media at the Sustainability Symposium 2020: Improving the Human Condition on January 20 at the Artemus W. Ham Concert Hall on the UNLV campus in Las Vegas.

The event will shine a light on some of our society’s greatest challenges and areas of opportunity, highlighting how we can build a socioeconomic structure that is simultaneously sustainable, socially equitable, and financially abundant.

We invite you to join us for what promises to be an unforgettable day filled with ideas, insights, and inspiration.

Click here to register for the Sustainability Symposium 2020: Improving the Human Condition.  Space is strictly limited and by reservation only, so reserve your seat today!

Additionally, we invite you to join us for a special gala dinner on Sunday, January 19 to celebrate the winners of our annual Home of the Year and Sustainability Awards—a group of building professionals and manufacturers who are solving for many sustainability issues that we face today.

A sincere thank you to our generous sponsors, Mitsubishi Electric Trane, DuPont, Jinko Solar, Trane Technologies, Samsung, and Zappos for helping to make the Symposium possible.

Got questions about the Sustainability Symposium?  Write to me at sara.gutterman@greenbuildermedia.com.