COMMUNITY: CELEBRATING COMPLEXITY. In this final chapter of the Celestia Project, we look at what it means to live with and near other people. What makes one neighborhood or city thrive while others dwindle? Where is the balance between nature and social activities? And where does happiness factor into the equation?

nthropologists have long held that the ideal number of human beings for a healthy, relatively conflict-free community is about 100. Robin Dunbar in the 1990s suggested that 150 people are about as many as the human brain cortex can handle. That’s a lot better than Jean-Paul Sartre’s existential argument that “Hell is other people,” but it’s still not much to work with, given the billions of people now astride the Earth.

I’ve introduced this point to demonstrate just one of many reasons why new communities so often fail. Good intentions don’t always lead to lasting harmony, any more than good street designs and building layouts do—although they certainly boost a community’s chance of “making it.” The biggest obstacle, however, is the shadow side of human nature.

It's not the free love. It's not the dope, or other stereotypical reasons. It's the alone-ness. Back in Chapter 3 of Celestia, we talked about how much nature is “enough” to keep people happy. Surprisingly, we just need regular, small doses—not constant immersion.

Apart from the occasional bad seed drifting into the community were other, systemic reasons he says, including “too much hard work. It was after World War II, and people traditionally shunned physical labor, except in a symbolic sense, such as mowing the lawn or working out at the gym.  In this regard, back-to-the-land seemed like a step backward to many people.”

Also, he notes that many commune dwellers had little cash money and, notably, “too much isolation. The countryside might be beautiful, but you’re surrounded by teabaggin’ rednecks, and there’s not enough entertainment and culture.”

That’s not to say people are inherently “evil,” if you’ll forgive my use of that word.  Sociologists have demonstrated that most people lean toward empathy, compassion and kindness, rather than the “shadow” of negative emotions: jealousy, anger, greed and so on. And like it or not, it’s the people that decide the fate of a community, not the number of walking paths.

In his book, The Abundant Community, John McKnight suggests out that many feelings of discontentment in our lives are triggered by the false promise of our modern, consumption-oriented answers to questions that have no answer. Because we think of ourselves as consumers rather than citizens, we believe that “what we are seeking is, in fact, attainable in the marketplace.” But this simply isn’t true, McKnight argues. We keep buying stuff, yet never achieve satisfaction. A bigger house, a better wardrobe‑nothing does the trick. We end up “purchasing experiences rather than actively producing them. We have become spectators.”

The real heart of the matter, McKnight contests, is that we’re trying to make our communities work like corporate factories. This model results in homes and communities that are organized with “consistency, uniformity and replaceable parts.”

Consumers see themselves as self-supporting, independent individuals, not part of a greater (or local) tribe, he explains. As a result, they make decisions based on their own self-interest, without considering the greater good of the community. They can be small things that result in big rifts: the decision to start a dog breeding operation, heavy use of lawn herbicides next to an organic gardener, driving too fast on a local street. The possibilities of friction are limitless. And friction, left unresolved, can lead to big problems.

Often, the solution to friction comes from code officials, city planners or other “authorities” in the form of generalized regulation‑one-size-fits-all rules: a change of zoning to prevent animal husbandry in the area, an ordinance requiring a permit to spread herbicides. These top-down rulings are likely to please one neighbor and outrage another. Let the feud begin. Neighborhood associations run into the same issues. If their values are rooted in property values and individualism, they are likely to mandate the most mundane of choices—house color and mailbox size, dog leashes and solar panels on the roof—stifling creativity and personal growth, and cutting off resilience at the knees.

What people actually need from their communities, McKnight argues, should reflect the true human condition: “the truth of the decay, restoration and growth processes that are a part of every living system. Variety, uniqueness and appreciation for the one-of-a-kind are its essence.

To avoid incidents that turn into full-grown feuds, the members of a community (or would-be community) need to develop intricate layers of trust. How do you do that? A competent community keeps three key principles at work: Focusing on the gifts of members, nurturing associational life and offering hospitality to strangers. But these are just the baseline.

Real trust, they argue, may mean neighbors opening up in ways that might shock conservative middle-class residents of bedroom suburbs. You have to share your personal vulnerabilities. Sharing stories about personal tragedies and challenges create bonds that are more lasting and genuine than passing a pair of hedge clippers over the fence. This type of open communication, McKnight notes, breaks the consumer cycle of relationships.

“It is an answer to the conspiracy of secrecy in our families,” he says. “It is the way a village raises a child...reclaiming power from the hands of professionals who are sworn to secrecy and putting it in the hands and hearts of citizens.”

Traditionally, the success of a community has been measured in demographics: the rise or fall of population, percent of land developed versus “preserved,” the rise of home values and so on. But isn’t the satisfaction (a.k.a happiness) of residents also a key indicator of a community’s health and sustainability?
Human happiness is an elusive target, of course, and one that involves inner work. So let’s leave it for last. Creating the right type of environment for living can lay the groundwork for satisfaction. So let’s start there.
In his outstanding book, Pocket Neighborhoods, Ross Chapin takes on the challenge of “creating small-scale community in a large-scale world.” In a series of case studies of fast-selling, desirable small projects, he notes many key features (see. p. 32)

Faith and the Future

If greater happiness is the ultimate goal of community, what will it take to reach that frontier? We may have to explore uncharted territory: our own fears and neuroses. At least that’s the perspective of Gregg Easterbrook, author of The Progress Paradox. The path to satisfaction, he says, lies in two simple words: gratitude and forgiveness. The words are simple, but getting there is anything but. In fact, they may require an act of faith.

That’s because most people‑and Americans especially, he says‑are self-absorbed and afraid. Part of their fear, he says, stems from a “baseline anxiety” about death. They know that no matter how rich, famous or powerful they become, they can’t avoid oblivion.

But Easterbrook argues, quite rationally, that life either has meaning here and now or meaning eternally. Either way, we should not, as Dylan Thomas wrote, “Rage, rage, against the dying of the light.” Instead, we must embrace the moment, be thankful for what we have, and forgive those who are on a different path.

Fortunately, even for devoutly anti-religious people, the convergence of science with long-spiritual ideas has made it possible to reconcile the rift between the two. The brilliant theoretical scientist, Michio Kaku, co-founder of String Theory, now tosses around phrases such as “the Mind of God,” when discussing physics. Some studies suggest that our thoughts may actually shape our reality, so you can see why projects such as Celestia focus on the light, not the darkness of possibility. If we imagine a better future, we may clear the way for it to happen.

Opening ourselves up to the universal concepts of gratefulness and forgiveness are the KEY personal characteristics we need to be happy. And until we know how to be happy, no community will be good enough, no neighbor trustworthy enough, no lawn mower sharp enough to satisfy our endless, unquenchable longings. GB

An age of change in how we gather and live together is coming. The millennial generation is just the first of many that will see community building through a new lens. Less concerned with accumulating material wealth, millenials value friends and social connections highly. Interested in resilience, culture and environmental responsibility, they and their offspring will change the way neighborhoods, towns and cities work. As the population in the U.S. and worldwide becomes increasingly diverse, acceptance of others will become as natural as breathing. Technology will offer us all new frontiers to explore, but our feet will remain rooted in our small, customized communities.

Here are four succesful projects that so far seem to have cracked the riddle of what makes an eco-friendly plan work.

Flexible Commons. While most experts agree that having some kind of common outdoor area is important, it needs to accommodate different interests. Personal garden options are great for some residents, but not everyone wants to participate, so allow them to opt in or opt out of regular maintenance without guilt or obligation.

Sweat Equity. Neighbors who are involved in the hands-on construction of their homes and landscaping tend to be more heavily “invested” in its success. While this isn’t a guarantee of peace and prosperity (see The Witching Hour), it’s a step in the right direction. 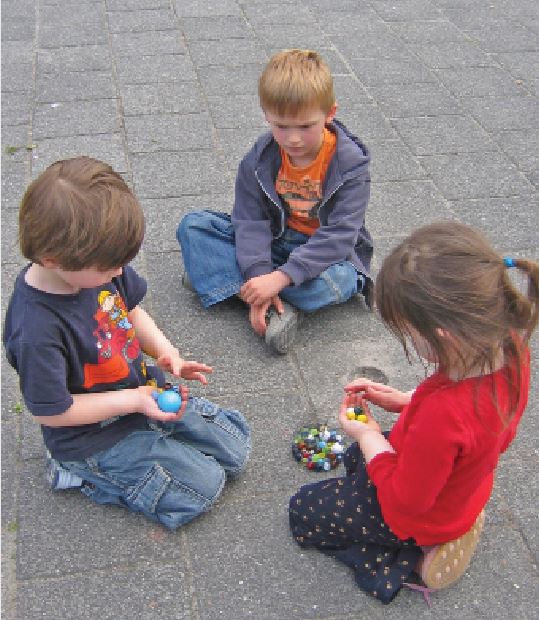 “Popsicle Index.” In a safe community, children can range freely in a wide area. The key, says Chapin, is shared common areas that mix private and public space in a way that creates a safe pathway for children.
Streets as Rooms. Good communities have streets that create a sense of enclosure that makes them walkable, where kids can play and porches overlook activity. Make the entry points at each end of the street narrow and well defined, with traffic speeds under 20 mph.

Remote Parking. When cars are parked remotely, yards and commons are more foot friendly, and clustering of homes can be denser, encouraging neighborly interaction. 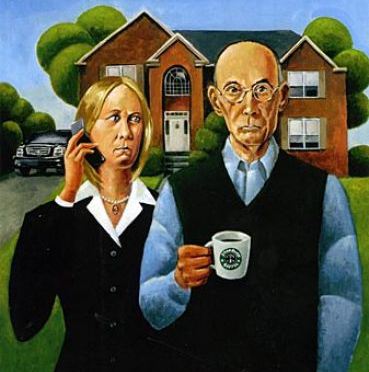 Despite their relative wealth, modern people are simply programmed to get stressed out by smaller and smaller inconveniences.

According to Gregg Easterbrook, author of The Progress Paradox, Americans, despite being citizens of one of the world’s most affluent nations, have high levels of anxiety, stress and often wallow in despair. Some of the main physical causes:

Not Enough Sleep. This one’s obvious.

Too Little Vacation. Not only do Americans have less vacation available than Europeans (two weeks vs. six weeks), they often don’t even use it, opting instead to claim trade it flexible pay or working during the vacation.

Poor Diet and Lack of Exercise. Fast foods and minimal exercise are the norm.

Poor Quality Family Time. Although fathers, for example, spend more time with kids than 20 years ago, most of that time is stressful, hectic or spent in the car commuting.

The fate of the early Salem community demonstrates that good design is only part of the recipe for success. Negative emotions can lay waste to the best-made plans. Looked at from the perspective of a site plan, the quaint, 17th-century town of Salem, Mass., should have been a haven of peace and contentment. Narrow, walkable streets, common areas, gardens, religious institutions‑it had all of the ingredients we know to be good for community cohesion. So why did it erupt into a literal “witch hunt” of terror and superstition?

A friend of mine, Lisa Wolfinger, produced a documentary a few years ago about the Salem witch trials. She did a lot of research when writing the show and discovered the underlying issue: grievances. Salem was a hornet’s nest of anger, jealousy and envy. Neighbors were feuding about land rights, sleeping with each other’s wives and husbands, engaging in lawsuit after lawsuit to right perceived wrongs. For a group of people who perceived themselves as pious and Christian, the resulting mess made history.--Matt Power