By combining an “always on” ERV and quiet bath fan this installation achieved above-and-beyond air quality. 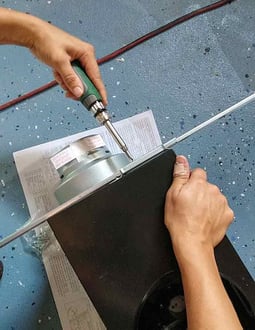 One of the challenges with small “mother-in-law” apartments and accessory dwelling units (ADUs) is that they’re often built without adequate ventilation, or unbalanced systems that create drafts or fail to clear the air, or worse, haul other pollutants back into the building.

For example, most range hoods operate at 300 cfm or higher only. When you switch on a range hood in a building with the footprint of a garage, you can quickly depressurize the space, pulling air in indiscriminately from unwanted sources (such as the garage, in the case of an apartment over parking).

While upgrading the ceilings in a small accessory structure in Florida, we saw an opportunity to test one of the new ceiling insert Energy Recovery Ventilators (model FV-VE401) from Panasonic in conjunction with an exhaust only bath fan (model FV 0511VKSL2), as a whole-house air quality solution. With a total square footage under 400 sq. ft., it would also meet the definitions of a tiny house, by most standards, and the same size approximation would apply to a park model RV.

We had three goals in mind with the test:

Panasonic has spent years simplifying installation of their equipment, and making them about as close to turnkey as you can get. The bath fan took only about 15 minutes to set and install. The ERV took a little longer, because it’s a larger, heavier unit--and the rafter distance was not 16 OC. To secure it, we had to build out some 2x4 framework.

One of the more helpful details the company includes as part of the ERV carriage is a built-in measuring gauge that allows you to set the depth of the unit, depending on your ceiling type. We set ours at the far extreme of that depth, to accommodate ¾-inch strapping and another ½ inch for a galvanized metal ceiling. The ERV does not come with an integral light, so we dropped a separate box in for a surface mounted LED light a few inches from the ERV. The bath fan has its own built-in LED that is plenty bright for the separate toilet room.

Wiring was straightforward. We opted for default, lower energy setting for full-time operation of the ERV.

For ducting, Panasonic recommends insulated ducting for the FV-VE401, but assumes that air will pass through unconditioned spaces. Because our ducts would pass through partially conditioned space above the bath, we used a less expensive type of ducting (still a step up from standard rigid 4-inch ducts), AC Infinity Flexible 4-Inch Aluminum Ducting. It’s made with four layers. This product seems to perform well for this purpose, does not leak, and was much less expensive than insulated 4-inch duct.

Because two units—an ERV and a toilet room fan would be placed at the same end of the building, we had to pay careful attention to placement of the exhaust ducts. Panasonic specifies a distance of 6 ft. between the ERV intake and any combustion appliances. We applied the same rule of thumb, separating the bath fan exhaust from the the ERV fresh air intake by about 7 ft., to avoid recirculating odors.

We also learned one of the pitfalls of using a third-party vent cap instead of Panasonic’s proprietary combination wall cap for the ERV. We instead put in some stainless steel vent caps with “gravity flaps” for both the ERV and bath fan exhausts, thinking they would hold up better than PVC to Florida’s extreme heat and UV.

What we didn’t foresee is rattling. Because both the Panasonic bath fan and ERV operate at a low speeds, the metal louvers rattled constantly. We ultimately replaced them with vinyl ones with mosquito mesh and no moving parts. The two ultra-quiet DC-powered fans in the Intelli-Balance ERV operate almost inaudibly, and the bath fan is only slightly louder. When we first installed the ERV, and set it for constant operation at a low speed, it was so quiet that we had to hold a piece of paper over the exhaust to make sure it was working.

Airflow in an Unvented Assembly

We chose the bath end of the structure rather than the kitchen area, assuming that the exhaust only range hood would “pull” clean air from the ERV down the length of the building. To assist in this flow, we left rafter areas above the ceilings open to living spaces, below roofs insulated with 3-inch rigid foam. We added a ceiling fan near the center of the building to keep air moving. 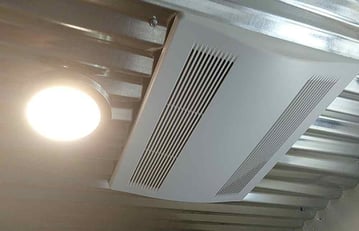 One challenge with unvented structure of any size is the buildup of pollutants and humidity. Our aim was for the ERV would solve these challenges. The addition of solvents, paints, epoxies and even cedar boards had added  a powerful stew of odors and VOCs to the tight structure. We were not sure the ERV would have enough capacity to “clear the air.”

We were pleased to find that our concerns were unfounded. We activated the unit on a Friday, and by Monday, when we re-entered the building, most of the odors were gone. Rather than trust our noses, however, we installed IAQ sensor to test for pollutants over a 24-hour period. What we found was very encouraging. Air quality levels throughout the 400 sq. ft. building remained well within the optimal range, with only a minimal spike occasionally after cooking. I attribute this to a less-than-perfect range hood, not the ventilation system.

When we initially talked to Panasonic about ventilation for the ADU, they suggested two exhaust-only units in the bath area. But as we explained the challenges of a small space and the risk of depressurization, they agreed that the ERV was a smarter choice. It should be noted that ERVs are not intended to replace bath ventilation. They’re not designed to remove heavy humidity from showering for example. But our open floor plan allows enough dispersion of humidity for the spot ERV to handle the occasional humidity spike.

After two months of operation, the electric bill for the ADU has seen negligible increase, despite 24/7 operation of the ERV.

This field test coincides with Panasonic’s recent development of a new “smart” suite of ventilating products called Cosmos Healthy Home System, which incorporates an IAQ sensor and wifi hub to monitor and balance air quality in the home. Our installed system is not Cosmos-enabled, but does demonstrate the quiet and efficient engineering that will be part of that advanced system. Cosmos will also incorporate the company’s new ventilating range hood, the WhisperHood IAQ range hood, said to operate at noise level far below that of most competitors.

For more information on the products reviewed here, click on the links below: