BUILDING ENERGY-EFFICIENT HOMES, OR MAKING GREEN RENOVATIONS, IS ONLY HALF THE BATTLE in regions with cold winters. Another challenge is finding the right heating system.

Financial cost often drives the decision. But increasingly, builders and homeowners are asking: “What is the environmental cost?”

But the real answer is much more complicated.

Wood-burning, in general, has a lighter carbon footprint. Trees grow back, and because the carbon dioxide emitted in the atmosphere is on par with the CO2 released when wood rots in the forest, burning contributes little to global climate change. That’s good for the planet. 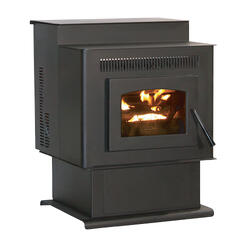 Burn the wood in a fireplace, however, or in an old-style stove or outdoor boiler, and it releases tiny particles that can be a major source of local air pollution. That’s bad for your neighborhood. Modern, EPA-certified wood and pellet stoves are better at controlling this particulate matter, but not as clean as burning natural gas.

Climate change is a different story, though. Burning oil releases carbon dioxide that was sequestered in the earth; natural gas gives off methane. These two gases trap heat and warm the planet.

And here’s another layer of complexity: These considerations don’t include the environmental impact of producing and transporting the heat source. Problems with forcing natural gas out of shale
deposits, or drilling for oil deep under the ocean, are being closely scrutinized and widely debated .

What about electric heat, which produces no local pollution? It’s the heat of choice in 3 out of 10 American homes today. Using electricity to power a heat pump, for instance, can be very energy efficient. But when electricity is produced by burning coal, as is common in much of the country, CO2 emissions can be off the charts.

Perhaps there’s no environmentally perfect heating system. Even passive solar homes typically need some backup heat in cold climates. So it makes sense to weigh the pros and cons of the most popular alternatives in your region.

Fuels: The Good, the Bad and the Smoky

No fuel source, with the possible exception of the sun, comes without an environmental cost. But each affects nature’s balance sheet in a different way. Here are some of the most notable pros and cons of common fuel sources.

CONS: Particle emissions contribute to air pollution.
Must be burned correctly in efficient units to be clean.

Here’s a primer to help.

The Facts about Gas
Half of all American homes heat with natural gas, according to census figures.

Gas is abundant in North America, and the current supply glut and price advantage over oil are increasing its popularity.

Gas is composed primarily of methane. The main products of combustion are carbon dioxide and water vapor, making it the cleanest-burning fossil fuel.

How clean? One way to measure the risk to human health is with particulate matter.  The EPA relies on a “PM 2.5” air quality standard. It’s a reference to concentrations of particulate matter in the air below 2.5 microns, small enough to lodge deep in the lungs.

In 2007, Brookhaven National Laboratory conducted a landmark study of the emission characteristics of gas, oil and wood pellet heating systems, focusing on the PM 2.5 standard. Using a gas furnace with an 81% AFUE (annual efficiency), researchers recorded only tiny amounts of fine particulate emissions.

Today, consumers can easily find boilers with AFUE ratings well above 90%. The most efficient units feature sealed combustion, and they condense flue gases in a second heat exchanger. For room additions, or in well-insulated new construction, direct-vent, through--wall space heaters can do the job for less money. Typical AFUE ratings for direct vents are in the low 80% range.

On the downside, natural gas is a non-renewable resource with a big environmental footprint on the production side. Recently-discovered deposits in the Northeast locked up in shale deposits are released through hydraulic fracturing or “fracking,” which has been tied to local groundwater pollution. In terms of global emissions, methane is a potent greenhouse gas, with the ability to trap heat 21 times more effectively than carbon dioxide.

People living away from natural gas lines may also consider a cousin of natural gas, propane. Compressed to a liquid, propane is a byproduct of natural gas processing and crude oil refining.

Propane shares similar clean-air characteristics with natural gas, but its connection to oil refining, and the need to transport the product by rail and truck, give it a larger carbon footprint. Propane warms only 7% of American homes. Penetration is likely to rise in the Northeast, however, where many rural residents want to move away from expensive oil heat.

Green Oil Heat?
It seems unlikely at first glance. Heating oil has been losing market share for years, and now warms roughly 9% of American homes. But the industry has been working hard to clean up its act, and is developing cleaner fuels and more efficient burners to rival its arch enemy, natural gas.

Equipment makers are rolling out condensing boilers and furnaces with AFUE ratings in the mid-90% range. These units include burners with multiple firing rates, outdoor temperature sensors and stainless steel heat exchangers.

On the fuel side, several Northeast states have begun phasing in ultra-low sulfur heating oil. The testing done at Brookhaven National Laboratory showed a linear relationship between sulfur content and particulate matter. When the lab burned heating oil with a sulfur content below 15 parts per million, emissions were about the same as with natural gas.

Oil heat’s future, though, seems tied to backing out of petroleum and into biofuels.

Many dealers now carry a blend of low-sulfur petroleum and vegetable oil, typically from 5% to 20%. Burning B-20, as it’s called, can cut sulfur emissions by 80%, and CO2 by 20%, according to testing done by the National Oilheat Research Alliance.

In time, the greenest oil won’t come from the ground, but from trees. Several start-up companies are working to find an economic way to make cellulosic ethanol, and turn forests into biorefineries.
But oil production today remains a dirty business. Last year’s Gulf of Mexico oil spill, and the methods used to extract oil from tar sands in Canada, are extreme examples, but they serve as reminders of oil’s broad impact on the environment.

Wood: It Depends
Wood is probably the most popular alternative heating fuel in cold climates. It’s not a
climate change villain. It’s renewable, and tends to be locally available and plentiful.

Unfortunately, wood smoke contains particulate matter. How wood is burned—and in what device—makes a big difference in whether it’s a green alternative or a big polluter.

Burning logs in a standard fireplace, where combustion is uncontrolled, is not a clean form of heat. Neither are older, smoke-belching outdoor wood boilers. Some newer outdoor boilers, certified under a voluntary program with the EPA, are designed to emit less than 0.60 pounds of particulate per 1 million BTU of wood burned. Some states have even stronger regulations, and the EPA plans to tighten federal limits in the near future.

Wood stoves are fixtures in many northern homes, but those made before 1988 can emit between 15 and 30 grams of fine particles every hour. Stoves made after 1990 are EPA certified at 4.1 grams per hour for catalytic-type designs and 7.5 g/h for the less-complicated and more common non-catalysts. When buying a new wood stove, look for the EPA hang tag, which specifies the unit’s emission level. The only way to achieve that level is to burn dry, seasoned wood in a hot fire.

The hottest trend now is wood burning is pellet fuel, common in Europe. Pellet stoves are easier to feed and operate than log burners, and they can burn very efficiently. But compared to a typical natural gas furnace or low-sulfur oil boiler, pellet stove release considerably more particulate matter, according to the Brookhaven study.

The cleanest way to burn wood, whether in the form of pellets or logs, is in a state of the art boiler. Manufacturers have learned how to pull most of the heat and pollution out of the wood through two-stage gasification and high-temperature combustion that produces no visible smoke. Particle emissions as low as 1 g/h are possible.

No matter how wood is burned, however, it produces less greenhouse gases than any fossil fuel, once its growing phase is figured in. Critics say wood isn’t really more carbon neutral, because petroleum is typically is used to harvest and transport it, and the carbon in oil and gas were free in the atmosphere millions of years ago; so the only difference is time scale. It’s a gray area.

Corn
Just as wood pellets are a common alternative fuel in forested regions, shelled corn is becoming a more popular way to heat in farm country. Shelled corn has a BTU equivalent similar to air-dried softwood.

Corn-burning stoves resemble pellet stoves; in fact, some multi-fuel stoves burn both. For central heat, corn furnaces and boilers also are available from the same manufacturers.

Corn is a plentiful, renewable resource that is especially climate-friendly. Advocates point out that burning corn actually releases less CO2 than the plant absorbed while growing, because some of the carbon is stored in the stalk and roots.

Corn also is a relatively clean fuel, according to independent tests done for the Hearth, Patio and Barbeque Association. Corn stoves release particulate matter in the 1-5 g/h range, similar to a pellet stove.

But growing corn typically requires petroleum-based fertilizer, and some people are uncomfortable with burning a food crop. In some regions, local corn fuel co-ops use sustainable growing techniques—minimal fertilizer and low-till farming methods.