Take a Breath and Vent

Microwave exhaust fans are among the most commonly ignored features in today’s kitchens. Don’t put your health on the back burner: Improve your kitchen ventilation for healthier living.

“Being home during the pandemic put a greater focus on the health and safety of our home’s indoor air quality,” says Matos-Rogers, a member of Green Builder Media’s Next Generation Influencer Group. “Properly venting our over-the-range microwave was done as part of a larger ventilation project we completed early this year, including installing an energy recovery ventilator (ERV) on both floors, upgrading our bathroom exhaust fans and venting the microwave to the outside.”

While there are many sources of indoor air pollution, one of the prime culprits is the ubiquitous microwave exhaust fan. These have been given the appropriate nickname of “forehead greasers” by the expert team at Lawrence Berkeley National Laboratory, which has done in-depth research on how to effectively remove kitchen contaminants, according to Nathan Kahre, business development manager for EnergyLogic in Denver. 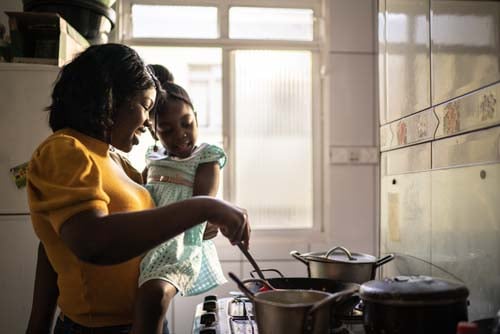 “Unfortunately, it’s still a common practice to install recirculating microwave range hoods that pull air from the cooktop through a small filter and then blow that air back out into the kitchen,” says Kahre, a member of Green Builder Media’s Next Generation Influencer Group. “They do nothing more than distribute these contaminants far out into the kitchen and the rest of the living space.”

Sweeping Dirt Under the Hood

No matter how little cooking you do or how neat a chef you are, your stove is one of the dirtiest things in your house when it comes to indoor air quality, says Ken Nelson, northwest regional sales manager for Panasonic Life Solutions in Olympia, Washington.

“Even if you do something as simple as boil a piece of spaghetti, you’re creating vapor that includes the starch from the spaghetti,” says Nelson. “When you inhale it, you’re also inhaling the outgassing from other materials in your home that cling to the vapor, all of which ends up in your lungs and can cause health issues.”

Cooking is one of the largest producers of fine particulates and VOCs in our homes, says Kahre.

Among the pollutants found in cooking emissions are particulate matter, nitrogen dioxide, carbon monoxide, and toxic chemicals such as formaldehyde and polycyclic aromatic hydrocarbons, according to “Reducing Exposure to Cooking Pollutants: Policies and Practices to Improve Air Quality in Homes,” a report by the Environmental Law Institute.

Health impacts associated with these pollutants, especially particulate matter, include cardiovascular disease, respiratory disease and cancer, according to the report.

Home on the Range—Best Practices for Retrofitting

The simplest solution to control contaminants is to remove them from the home at the source with a range hood, says Kahre. Some modern microwaves do vent to the outdoors, but “none can do this as well as a range hood.”

Range hoods that vent to the outdoors are considered more effective than other kitchen exhaust system types, particularly ductless or recirculating range hoods that use a filter before blowing the air back into the room, according to ELI’s report.

In a new construction home, venting a microwave fan or a more traditional range hood is simple, since premade exterior vents and standard ductwork make most vents easy to vent, says Kahre.

A range on an island or an interior wall makes running ductwork outside more difficult and can require drywall demolition or relocation of the range, notes Kahre. “Anything that can create air movement up and across the face of the pan will be better for removing contaminants even at lower speeds,” he says. “Under-cabinet or island hoods often have difficulty creating this effect, especially when large pots are placed on the back burner, blocking the airflow.”

When selecting a range hood, Kahre recommends looking for one that vents outside and doesn’t recirculate air; one that is large enough to cover as much of the stovetop as possible; and one that operates quietly enough that people will be more likely to use it. He says quality range hood prices range from $250 to more than $1,200, depending on the size, materials, and functionality. A contractor would need to install the range hood for proper ducting.

Matos-Rogers hired an HVAC company that specializes in designing systems from a building science perspective for their ventilation project. Ventilating the microwave took less than one day and cost about $1,500.

“This seems fairly typical, though less-complex retrofits could cost less,” Matos-Rogers says. “Our microwave isn’t located on an exterior wall and couldn’t be vented through the roof, which required running a longer duct to an outside wall. The contractors had to remove the microwave to cut a hole in the cabinet for the ducting, and then it went right back in place when they were finished. We just had to order the manufacturer’s adapter to connect the ducting, as it had been discarded during the original installation.”

Regardless of the type of range hood or exhaust fan you have in your kitchen, it is useless unless you use it. A recent study by the Center for Real Life Kitchen Design at Virginia Tech found that only 8 percent of people use their range hood regularly. Twenty-three percent use it almost never or only occasionally. For many people, the fan is just too noisy.

Panasonic’s WhisperHood IAQ range hood, which is part of the company’s Cosmos Healthy Home System indoor air quality line of products, offers an extremely quiet kitchen ventilation system. “Fan noise is measured in sones, with an older kitchen fan typically measuring 6 or 7 sones,” says Nelson. “The WhisperHood range hood can be as quiet as 0.3 sones, depending on the speed.”

The typical recirculating range hood does little more than pull air from the cooktop through a filter and then back into the kitchen. The more efficient, safer models vent outside and do not recirculate air. Image credit: Andrii Atanov/iStock

While it’s best to address pollution at the source in the kitchen, Nelson says installing a fan in a nearby powder room or other room can help pull pollutants from the air.

“Panasonic makes a bathroom fan with a trigger that automatically turns the fan on and off when it senses moisture in the air,” Nelson says. “They’re easy to install and quiet and help pull moisture and pollutants. No range hood is as quiet as a bathroom fan, so that’s why we recommend putting bathroom fans in nearby rooms. You don’t want an automatic trigger on your range hood to start it up at 2 a.m.”

For Matos-Rogers, spending the time and money to install an exterior vent on the microwave was worthwhile. “Tracking trends on the IAQ monitors gives us verifiable data,” he says. “while our senses notice the lack of smoke buildup and lingering smells from cooking.”