The presence of rooftop arrays in Louisiana fortified homes against Hurricane Ida—but few had the right setup to provide adequate air conditioning. 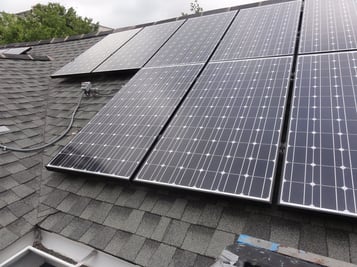 A report by the Times Picayune noted a surprising trend among homes hard hit in the New Orleans region by Hurricane Ida. The ones with large arrays of solar panels mostly came through the storm unscathed. What’s more, they kept producing power during the long, hot week of wire repair after the storm. Speaking to Picayune reporters about her 37-panel solar roof, Jenel Hazlett noted that "During this whole Ida incident, I didn’t have to chase gas, I didn’t have to worry about carbon monoxide, I didn’t have to worry about extension cords," Hazlett said Thursday. "The sun came to me."

First let’s look at the structural mechanics. Why did the panels help with roof retention? We can get a hint from research done on solar panels and hurricanes in Florida.

“Solar companies must securely attach solar panels to a building with ample attachment points to resist wind uplift. They fasten them with a mounting system that anchors the roof sheathing with lag screws into the roof trusses, which reinforces the roof and makes it stronger. This makes Florida solar panels less susceptible to damage from blowing debris in a storm.”

Put simply, installing solar panels typically requires an engineering plan, followed by multiple levels of attachment. On an older roof, especially, which may have been attached decades ago, this offers an “upgrade” of the existing nails that hold the roof deck to the rafters.

In addition, the panels themselves serve as a first line of defense against flying debris. Pieces of wood, lawn furniture and so on may strike the solar panels, may even damage them, but unless the damage is severe, they don’t end up tearing roofing material off the roof deck, exposing it to rain and potential wind uplift.

Note that not all panels are equal. Higher grade PV panels include special tempered glass and hail ratings that note their durability. For example, JinkoSolar uses a proprietary backing material called Tedlar, similar to DuPont’s bulletproof Kevlar, that adds tremendous impact resistance to their panels.

During Ida, many solar panel owners found themselves in the same boat as their non-solar neighbors. One of the problems with existing solar panel installations (including my own), is that unless the home has a battery bank and a certain type of self-switching inverter, the solar array becomes a bunch of paperweights during a power outage.

Of the 9,000 solar installations in the region, the Picayune found that “just a small fraction of that group has also installed the battery technology to store and use the energy on site, rather than simply selling it back to the grid for a discounted electricity bill. Without storage, the panels are of little help during a power outage, automatically shutting down to avoid electrifying the grid while workers are repairing power lines.”

The big catch, of course, is the price tag. A reasonably useful battery bank costs at least $10,000, and is really useful only in emergencies, unless you happen to live where the grid doesn’t connect, or grid electricity is extremely expensive.

One alternative that’s hit the market recently are smaller battery system that can be sized just to provide the most basic power services. The Panasonic EverVolt system, for example, can be set up to transfer automatically to battery power during a power outage, and run the fridge, lights and other light electronics at a more modest entry price.

For an ultra-low budget option, you might also consider standalone battery systems such as the Jackery Portable Power Station Explorer 1000. These systems are more or less turnkey, You plug them into the electrical outlet nearby, then plug your critical device into them, and they act like the familiar Uninterruptible Power Supplies (UPS) used to keep computers running during brief power outages. The problem with these small systems is battery capacity. The Explorer 1000, one of the best rated “generators,” has a 1002 watt hour (Wh) rating. That means that at best, it will run one 1,000-watt device for one hour.

So the real question to ask before you acquire any battery backup is: which systems do you absolutely need to keep running in an outage? Do you need a CPAP machine to breathe, for example, or refrigerated storage for insulin? The bigger issue, if you live in the South or Southwest, may be overheating and humidity. Will small window fans that use less power suffice for a few days, or will the heat indoors become dangerously unbearable?

If the answer to the last question is yes, then you’ve come to where solar energy intersects with how we really live: the “bleeding edge” limits of solar-powered backups. And you’re not alone.

The Elephant Sweating in the Corner: Solar Air Conditioning

It’s no fluke that one of the most sought out articles I’ve written in past years concerns the availability of solar-powered air conditioners. As I learned in my research and the article, such technology does exist, but the big players: LG, Panasonic, GE and so on, haven’t yet put their mark on this concept.

In the Ida scenario, the few homeowners with battery backups found they could run a window air conditioner briefly from their panels and solar storage. But it’s important to understand that a window A/C unit uses the same energy input to produce about one-third of the cooling BTUs that can be produced with a heat pump-based mini-split—using the same power.

Put another way, you can run a modern heat pump cooler about three times as long using the same power load.

Can you buy a solar air conditioner (heat pump) today? Yes, but its output will be quite limited, its cost will be higher, and its availability is likely to be limited due to global trade issues at the moment. Read the article (linked above) I wrote about the topic, and stay tuned. I expect this technology to develop quickly over the next year or two.