Most American Homes Now Have Some Air Conditioning

Only one in 20 U.S. homes lack environmental control, versus nearly one in two in the 1970s.

As of 2020, 95 percent of single-family residences had some type of air conditioning, up from 46 percent in 1975, according to U.S. Census Bureau data and a report from home remodeling site FIXR. 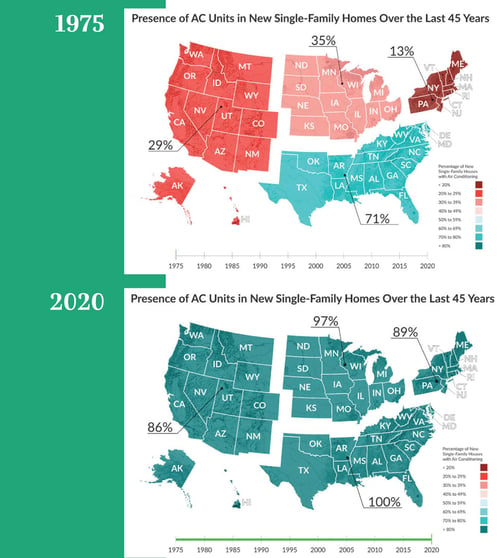 Air conditioning wasn’t a sure thing in 1975, but by 2020 much of the nation had caught up with the Southern United States. Source: FIXR and U.S. Census Bureau.

The biggest lifestyle change came in the Northeast, where only 13 percent of residents had A/C back when Gerald Ford was president. Fast-forward 45 years, and that total rises to 89 percent. Meanwhile, the Western United States climbed from 29 percent to 86 percent. Distribution is far from uniform, however. Only 44 percent of Seattle homes have any form of A/C.

The West’s growth in A/C use was largely due to increased unit availability and affordability, which helped bring people into areas that were too hot to live in year-round, according to FIXR. Hot climate homes featuring second stories and windows facing the sun could now have their temperatures “mitigated with fresh, conditioned air,” the site notes.

Innovation has mitigated the additional energy demands of home cooling to some degree. Heat pump technology and more-efficient compressors have made possible wider use of A/C without overloading power grids. Some consumers are turning to solar air conditioners to get cool without the carbon footprint and many look forward to a day where they pay no utility bill at all.