Water heating uses more energy than anything in a house, except space heating. This wifi-controlled device converts an electric tank into a smart appliance.

It’s not often that I rave about a product. But I’m about to do so. And let me add, Green Builder has no financial ties to Aquanta or their product. It’s just that good.

If you’re a little behind the times, like millions of American homeowners, and haven’t yet upgraded to a hybrid heat pump hot water tank, or a wall-mounted tankless hot water system, you’re probably dependent on an electric or gas tank of the “classic” variety. If it’s gas, you typically spend about $30 a month on water heating. With electric, depending on your utility rates, you spend about $42.

The device I'll be reviewing targets electric units, although the company also has a model aimed at gas hot water heaters. It works with basically any gas tank with an electronic ignition control.

For this article, however, let’s zero in on the electric model, and that annual cost of heating water. At $42 a month, that’s $504 annually. Couldn’t you use some of that money for better things?

Traditionally, the two ways to reduce energy use in coil-heated electric tanks include adding an insulating blanket or adding a mechanical timer.

The first is an easy DIY project. How much energy does this actually save? You’ll find figures all over the map, from seven percent all the way up to 45 percent. I’d put my money in the 10 percent to 16 percent range.

Mechanical timers have been around for decades. But I’d qualify these units, which range from about $47 to $88, as “advanced” DIY with regard to installation. They tend to come with instructions intended more for electricians than DIY homeowners.

But the real limitation is that they’re mechanical. That means that when the power goes out, your timer is thrown out of sync. The other limitation is that you have to physically open up the box and adjust the dials every time you want to change your heating schedule.

Two things sent me looking for a better hot water timer: my realization about how much energy is wasted heating water, and my success with other types of intelligent energy saving devices, such as smart plugs and HVAC controls. If I can control my furnace and mini splits with my phone, why not my hot water heater?

What I discovered, as I began searching for WiFi hot water controllers, however, is a “white space” where fierce competition hasn’t yet arrived. While many companies have jumped into the leak detection arena, Aquanta has quietly, perhaps brilliantly, occupied a niche that may prove to be one of the most important energy-saving innovations of all time.

The company makes a lot of claims about its hot water heater control, available on their website for $149. They say it’s easy to install, capable of learning your behavior to reduce energy waste, simple to access on your smartphone, and will even give you a heads-up display of your hot water usage patterns over time. I’ve been fooled before by tech companies such as Belkin (their Wemo smart plugs quickly became useless paperweights in my office), so I had to test this thing in real-time.

Out of the Box

The entire installation took 20 minutes. I warrant I could install one now in 10 minutes, after just one go. 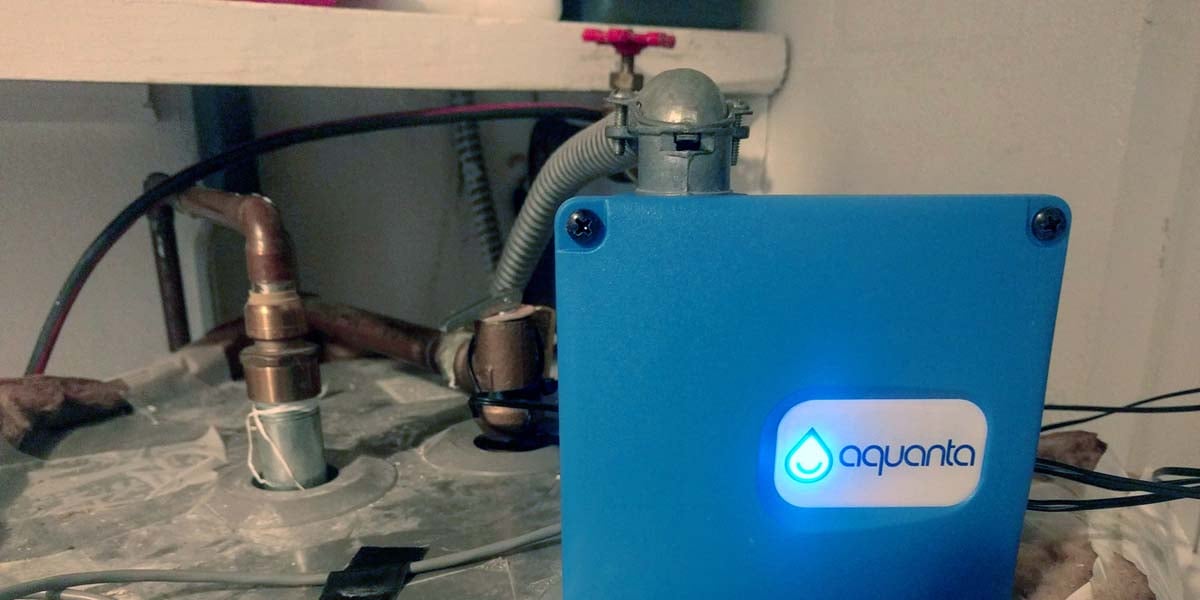 This alone is noteworthy. I can’t think of many times when the installation of a product has actually been easier than the company suggests.

The three sensors are a nice addition. They’re simple cables that you Zip tie onto the cold water intake, the pressure relief valve, and the tank to track your hot water demand and need, and alert you to a leak at the bottom of the tank.

This last sensor is sort of a “bonus” feature. It’s a simple direct contact sensor, not a sophisticated whole-house leak detector like Uponor’s Phyn or Flo by Moen, but it’s along the lines of Govee or other simple leak detectors that work with your existing wifi.

With sensors locked in place, cables neatened, I’m looking at a nice, sleek-looking box that’s attached to the top of my 50-gallon Rheem electric hot water heater. But would those good looks hold up in the App performance?

Next, I downloaded the free Aquanta App. This slowed me down a little because I had to set up an account, and the interface asked me lots of questions, including my location, types of appliances I use, and so on.

I generally don’t like to share this much data with wifi gadgets, although I understand the rationalization, specifically with “learning” Apps. By feeding the device information about dishwashers, clothes washers, and number of people in the home, it can calculate best practices of when to heat water and when to turn it down.

But I’m old-fashioned. I like to set schedules manually and tweak them myself. Fortunately, Aquanta is not pushy about data gathering. I was able to skip most of the questions and go right to scheduling and monitoring.

The results are impressive: full scheduling control over my hot water and a graphic look at when my hot water usage ebbs and flows. I’ve only begun to explore the options for fiddling with my usage.

So far, the unit has come through with stellar marks. I’ll want to monitor it and make sure it keeps performing well over the next year and will update this article accordingly.

So for $149, how much energy can I expect to save? A 2018 field study for the Minnesota Department of Commerce found that the “payback” period for an Aquanta on a 50-gallon electric hot water tank varies between 2.5 percent and 10 percent. The device actually saves more energy, the higher your typical hot water usage. A three-year payback is not inconceivable.

Aquanta’s Impact. At its best performance, a $150 Aquanta controller can pay for itself in energy savings in fewer than three years.

I would add to this calculation various special circumstances that make these wifi controllers even more dollar crunching. In rental units, for example, they could be installed in smart mode, with a “set and forget” approach to conservation, learning from tenants’ behavior.

In vacation properties, they allow the homeowner to shut down water heating when away. One can easily imagine a scenario where an Aquanta reduces a home’s hot water energy use by 50 percent or more.

Of course, better types of water heaters are coming, as I mentioned at the start of this article. Some of the better electric tanks now come with built-in wifi control. But it will take many years before they dominate the landscape.

Residential electric water heaters produce about 3 tons (each) of greenhouse gases per year. Even if an Aquanta only reduces that impact by 10 percent, when you multiply this by what are probably millions of existing installations of hot water heating in existing homes, the reduction in GHG could be massive.

How about a government-subsidized program such as those offered for smart thermostats, to get these controllers into homes for $50 or less apiece?