The Truth About Fly Ash

Construction materials made with fly ash offer great sustainable and performance benefits, but are they environmentally safe?

THE USE OF FLY ASH IN BUILDING MATERIALS diverts millions of tons of ash from the landfills each year, increases the constructability and durability of concrete and brick, partially replaces energy-intensive Portland cement, and is recognized by the U.S. Green Building Council’s LEED rating system as a post-industrial recycled material.

On the other hand, environmentalists question whether the industry has enough testing data to conclusively determine that this byproduct of power-producing coal combustion is environmentally safe.

Furthermore, as the U.S. Environmental Protection Agency deliberates over whether to reclassify fly ash disposal under a hazardous waste statute, the future of fly ash has turned into quite a hot-button issue. One of the reasons fly ash is so popular as an additive, of course, is that there's a lot of it left behind by coal plants.

At the same time, one big point in favor of fly ash’s use in concrete and brick is the idea that a chemical reaction is believed to effectively trap any minute levels of fly ash pollutants within the building material. 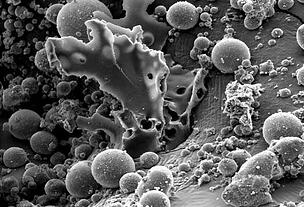 In fact, when concrete is produced, “much of the fly ash reacts with the Portland cement products of combustion to become, get this—calcium silicate hydrate—the same mineral that gives concrete its strength,” explains Michael Chusid, RA, FCSI, CCS, principal of the Tarzana, Calif.-based architectural technology consulting firm, Chusid Associates. “Any trace amount of heavy metal gets entrapped in the hydrated cement crystals and will have a very difficult time becoming liberated.”

Filling in more details on this unique chemical reaction, David Shepherd, AIA, LEED AP, sustainable development director, Portland Cement Association, Skokie, Ill., explains, “unlike some encapsulation techniques which coat a contaminant with material to ‘glue’ it into place, fly ash chemically reacts with cement during the hydration process and becomes an integral part of the new crystalline structure.”

Consequently, many independent building professionals, and even some environmental groups, are on board with the EPA’s current position that the encapsulated use of fly ash is a very good alternative to sending the ash to the landfills where it faces a greater risk of environmental catastrophe such as the collapse of a Tennessee Valley Authority’s fly ash containment structure in 2008, which sent 5.4 million cubit yards of toxic sludge across 300 acres in Kingston, Tenn.

For example, the active Washington, D.C.-based Environmental Integrity Project—a non-partisan, non-profit group that advocates on behalf of communities for stronger environmental protections—agrees that encapsulating fly ash in cementitious products, such as concrete and brick, is beneficial.

“However,” explains, EIP Attorney Lisa Widawsky, “this is a question of science, not law, and EIP believes EPA should apply the most accurate, up-to-date leach testing procedures to ensure that the products made with coal combustion waste products are safe.”

While many agree that more testing needs to be done, a number of studies have provided some encouraging data. For instance, a 2009 study, “Fly Ash Properties and Mercury Sorbent Affect Mercury Release from Curing Concrete,” performed by chemists at Ohio State University, discovered that concrete made with a 55% fly ash replacement emitted basically the same trace amount of mercury vapor during curing as concrete made without fly ash, according to Alan Kren, SE, LEED AP, a senior associate with the San Francisco, Calif.-based structural and geotechnical engineering firm Rutherford & Chekene.

“Their experiments also found that the amount of mercury that leached out of pulverized fly ash concrete was actually less han the amount that leached from concrete made without fly ash,” he explains.

In general, fly ash products tend to fare well when tested. For example, test results of CertainTeed’s WeatherBoard’s fiber cement siding found that most metals were below detection limits. “For those that were not, the metals were well within regulatory limits and considered safe, passing every test the EPA has published for determining whether a substance or metal is hazardous,” explains Drew Brandt, LEED AP, director of product marketing for CertainTeed’s Siding Products Group in Valley Forge, Penn.

At present, the only EPA-acknowledged test for concrete and brick building products is the Toxicity Characteristic Leaching Procedure where the fly ash concrete is ground up into pea-sized fragments and then soaked in acid. However, the EPA itself has stated that the test was outdated and not the most appropriate way to determine leachability of coal combustion waste constituents, according to Widawsky.

As an alternative, the EPA is currently developing the Leaching Environmental Assessment Framework (LEAF) test, but some industry stakeholders question how fair LEAF will ultimately be as the current platform allows the tester to choose the level of intensity to which the product will be exposed.

“One could apply the most severe testing scenario, which has nothing to do with ‘real life,’ and test a product that way,” explains Julie Rapoport, vice president, product management, CalStar Products, Newark, Calif., whose company manufacturers architectural face brick and concrete and brick pavers with fly ash.

In other words, one could probably leach anything out of any material if it was subjected to severe enough conditions, says Rapoport, but in reality, a brick or concrete façade or walkway would never be exposed to anywhere near such conditions, even collectively throughout its lifetime.

It’s important to note that companies like CalStar are also required to meet ASTM’s C618 specification, which mandates acceptable trace levels of metals and toxins in the actual fly ash which is being used in their building products.

While some environmentalists are labeling the concrete industry’s recycling of fly ash as “greenwashing,” the fact is that substituting fly ash for cement, from a sustainability perspective, is very significant.

“A good rule of thumb is that manufacturing a pound of cement generates a pound of CO2, and worldwide cement production accounts for 7% of all CO2 emitted,” explains Kren.

Consequently, when a fourth to a third of the cement in concrete is swapped out with fly ash, this makes quite a dent in the embodied energy and CO2 emissions created by concrete production.

In fact, the American Concrete Institute reports that, in 2007, cement production’s CO2 emissions were reduced by 15 million tons, thanks to fly ash.

CalStar’s patented process actually takes this even further as fly ash fully replaces cement in their products, which are also not fired in an energy-intensive kiln. As a result, the company reports an 85% reduction in energy and CO2 emissions for their products. It’s easy to see why so many companies have put so much emphasis on fly ash as a “green” path forward.

Fly ash is also known to increase the concrete’s durability, so “longer service life means that much less material and energy will be used to repair, rebuild or replace constructions,” adds Kren.

Furthermore, fly ash enhances concrete performance—including increased strength, improved sulfate resistance, decreased permeability, a reduction in the water/cement ratio required, and enhancement of pumpability and workability of the concrete, according to Shepherd.

Of course, the other reality that needs to be dealt with is the sheer volume of fly ash which is produced by coal combustion every year.

“In North America, the burning of coal for power generates about a half a cubic foot per person per year,” explains Bruce King, P.E., director, Ecological Building Network, San Rafael, Calif., and author of the book, “Making Better Concrete: Guidelines to Using Fly Ash for Higher Quality, Eco-Friendly Structures.”

“That’s a bucket of ash in the name of every man, woman and child in America, every year,” he says. “Whether we like it or not, we have to do something with it.”

The other big issue currently surrounding fly ash is the EPA’s continued deliberation about whether fly ash disposal should be classified as hazardous waste. Prompted by the 2008 TVA disaster, the agency is looking at the possibility of reclassifying fly ash disposal under Subtitle C of the Resource Conservation and Recovery Act, which would require disposal to be enforced by federal officials, or Subtitle D, which would be enforced by citizen lawsuits.

Since fly ash that is recycled for “beneficial use” would not be re-labeled under either scenario, the environmentalists are confident that such an eventuality would have no adverse affects on the fly ash building products industry.

“The EPA expresses a goal of increasing safe beneficial uses, so the plain language of the [proposed] rule only reveals a desire to increase—rather than inhibit—safe recycling such as the use of fly ash in concrete or bricks,” explain Widawsky.

However, building professionals beg to differ.

“I simply can’t grasp the logic of the idea that classifying something as hazardous will actually increase its recycling,” says Rapoport. “There is a deep concern that makes people want to shy away from a material that has anything to do with the word ‘hazardous.’ The stigma is very real, and we’ve actually lost a couple of jobs,” as the issue is debated.

Similarly, Kren is convinced that the industry would stop using fly ash if its disposal were to be classified as hazardous. “It only takes one lawsuit to bring a business down and no one would want to risk it.

The result would be more fly ash in landfill, more CO2 emissions and more resource use.”

With a long list of environmental and product performance benefits at stake, many are lamenting the possible risk that such a hazardous waste label would pose to its beneficial use.

“Even the guys who sell fly ash would tell you not to put this stuff on your pancakes,” quips King. “Like most of the substances in the natural world, fly ash is not for consumption or respiration. Does that mean we—or rather, the EPA—should formally declare it a hazardous substance, thus ending any chance of beneficial reuse or recycling?”

Meanwhile, the EPA doesn’t appear to be making a decision any time soon as the agency wades through the 450,000 comments made to the proposed rule.

Looking at the big picture, Kren considers himself an environmentalist and is actually a member of many of the organizations which opposed fly ash use. While he doesn’t doubt their motives, he also doesn’t believe they have science on their side, nor do they understand concrete and fly ash.

Reflecting back on fly ash’s introduction to concrete, Kren admits that the original idea was simply to make better concrete. “But now we feel that we are also doing some good since we know that every pound of fly ash we use reduces CO2 emissions by one pound, that we are conserving resources and that we are keeping fly ash out of landfill,” he explains. “It would be tragic if we sacrificed lowered emissions due to unfounded or unwarranted worries.”