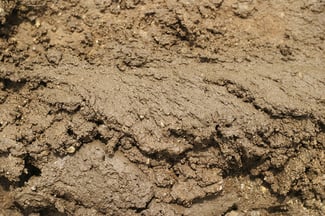 They are comprised not of stone or brick, but of a material called rammed earth. Considering that both structures have been standing for well over 1,000 years, doesn't this process deserve a second look?

Rammed earth is created when clay-rich soil is mixed with lots of water and a natural construction stabilizer. In ancient times, stabilizers often included animal blood, urine, bitumen and even certain plant fibers.

Structures designed with rammed earth can be further reinforced and supported to optimize sustainability. For instance, various timbers can be used to offset heavy weight and offer additional stabilization. In modern day, one only need to substitute cement for those aforementioned stabilizers, and the structure is made exponentially more secure. This new mixture—referred to as cement stabilized rammed earth or CSRE for short—has the same strength ratings as cement. For reference, that means it can withstand about 6,000 psi of pressure.

Once mixed, the solution is compacted, maneuvered as necessary and left to harden like cement. What remains is a structure or support system that's capable of withstanding extreme pressures up to a maximum of 400 psi. For a natural material, that's incredibly strong. Compared to bricks — even modern ones — it's nearly 10% of the pressure they can withstand. That may not seem like much when you look at the numbers, but when you consider how long the Great Wall of China has been standing, you'll change your mind.

The Advantages of Rammed Earth

What does all of this have to do with green building and architecture? Rammed earth is one of the most 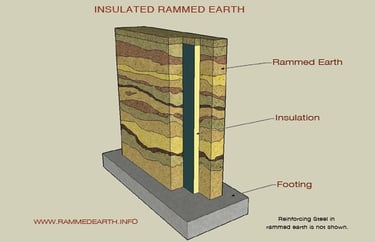 environmentally friendly materials there is, and it's pretty cheap. In some places, it may even be free. The clay-rich soil that can be used to create the rammed earth mixture can be found nearly everywhere. No matter how much you need, you'll never be lacking for soil. In addition, because the soil exists all across the planet, you don't need to transport it across large distances.

In many cases, you can get exactly what you need at the project site. There's no need to pay shipping or transport costs, or wait for the necessary materials to arrive to the project site, either. Not to mention, just like cement, the rammed earth mixture is easy to whip up — even for unskilled workers. It begs the question, then why aren't we using rammed earth more in modern projects?

It is being used, just not widely. In China, Xi’an University of Architecture and Technology is aiding rural communities by helping them construct homes and whole villages with rammed earth. In Western Australia, the government is looking into building homes for citizens out of the material.

Why Is It Not Used More Often?

It seems a bit silly that such a green, abundant and efficient material isn't considered more of an industry standard. One issue is that most builders and architects — even experienced ones — have never heard of it. Perhaps, the biggest boundary is that building codes have not been established that factor in the material. Therefore, it's a huge turnoff for many engineers and architects because rammed earth is unregulated. There's a greater potential for problems, such as the chance that inspectors could delay a project.

That can all change, of course, once awareness about the material is increased. It's more likely to happen now than ever, as interest in the green building industry and awareness about environmentally friendly materials is at an all time high. Who knows, maybe this article will even inspire you to look into the material and consider it for your next project.

James is a home improvement blogger and has worked with several construction companies such as Empire CAT. His articles have appeared in True Look, Construction Today, and Building Blok.

James White is a green builder and works with several construction companies, including Colebrook Construction Inc. He also writes on his blog about construction tips and his DIY home projects. Follow him on Twitter @JGtheSavage.