Until recently, battery powered lawn tools were the exception to combustion-powered monsters. But the tool landscape has shifted; power from solar PV now beats fossil fuels in cost per kilowatt. The result is a tantalizing new possibility: Net-zero landscaping with power tools or what I have dubbed "Sun-Scaping."

But one of the positive side effects of auto maker efforts to improve and upgrade battery power is that tool makers can now avail themselves of powerful, lithium-based batteries. Where once 18-volt batteries were considered the pinnacle of power, these units are driven with 40-volt and larger power packs. 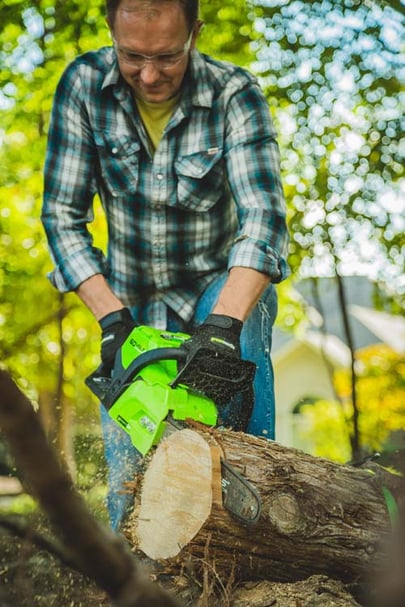 Our field tests of Greenworks tools such as this chainsaw find them surprisingly long lasting and powerful.

The two companies most familiar in this arena are probably Greenworks and Ryobi. Of the two, I'd classify Greenworks as the "prosumer" brand, so let's focus on them.

Some of our team at Green Builder have been using Greenworks tools for a year already.

Our company president, Ron Jones, for example, bought a couple of the Greenworks battery-powered chainsaws for use on his off-grid Mariposa Meadows site in Colorado. He says that even when he leaves the saw in his truck for months, it still holds a charge, with power that's competitive with a gas-powered model.

"I'll tell you, that thing is amazing," he says. "I figured after leaving it in there all winter, the battery would be dead. But I was able to clear a tree from the road without even recharging it."

Of course, unless you buy a special 12-volt automotive charger, battery-powered tools need an A/C outlet for recharging. The obvious solution is a solar panel array, with the right inverter.

One of the better inverters out there is made by Tabuchi Electric. It's a smart system that integrates with upgradeable battery storage. For our Flex House demonstration project, which we be on display at CES in Las Vegas in January, we combined a Tabuchi system with Jinko solar panels, to create a virtual power plant that can recharge a shed full of Greenworks tools.

What we like about the Tabuchi system is that, unlike many other inverters, it automatically switches instantly to battery power in an outage. Most inverters shut down completely, because of utility concern about power backfeeding into a damaged grid.

As a result, the homeowner gets a win-win. The Tabuchi-Jinko system means the home's key systems can continue to operate during a power outage, and there's no need to purchase an expensive, gas-powered generator for the same peace of mind.

At the same time, the solar keeps all of the battery powered landscaping tools capped off and ready. One can imagine that in the future, those extra batteries in the tools may become part of a self-contained, localized smart grid, keeping the lights on when the tools are not needed.

In this age of what seems to be a creeping hostility between neighbors, other types of pollution are also under close scrutiny, including noise caused by lawn tools such as leaf blowers. One of the unsung virtues of battery powered units is that they're much quieter than gas equivalents.

For example, a Greenworks 40-volt leaf blower operates at 68 db, less than that at a 50-ft. distance That's significantly less than a combustion model, which can hit 100 db near the user. Hearing damage can occur at 80 db, although obviously, protection should be worn.
Probably the neighbor issue is the more relevant perk. In towns such as Newton, Mass., where ordinances against leaf blowers are being pursued, a max of 65 db per property is being discussed.

If these new landscaping tools are charged with solar energy, with careful recycling of batteries, they're a big environmental step up from the combustion engines of the past. They create no air pollution, less noise, and should last for many years.

If you want to see what a battery-powered Sun-Scaping set up might look like, be sure to visit the Flex House in January at CES, or, if you can't make it, we'll be posting a video tour of the project after the show, in mid january, at https://www.greenbuildermedia.com/flextour.