The concept of an all-electric home has never made more sense.

In the built environment, improvements in technology now demarcate a clear path toward decarbonization. The timing is urgent. We are, quite literally, experiencing a perfect storm of human-fueled weather pattern disruption, from the inferno of Western wildfires to a record-breaking Atlantic hurricane season.We must rapidly change the source of our energy from fossil fuels to renewables, and the building industry can play a pivotal role. Why? Because heating and cooling of buildings in the U.S. accounts for about 10 percent of our national greenhouse gas emissions. But only about 1 percent of those buildings have upgraded to electrified heat pump equipment. Of those, an even smaller proportion can claim to operate at net zero, producing enough power onsite (or in leased offsite facilities) with renewable energy to heat or cool the building.

The latest heat pumps use about a third of the energy for heating or cooling of older electric resistance and A/C systems. Major advances over the last couple of years have mitigated two of the major weaknesses of this technology: temperature sensitivity and power “surge” when starting.

Many heat pumps can now operate efficiently at extremes of hot and cold temperature. Advances in variable speed motors mean they not only run more quietly, but they also ramp up and down easily, making them more flexible and viable for connection to renewable power, such as solar. This also improves their efficiency and lifespan.

Writing in Vox in 2018, David Roberts notes that currently, roughly 37 percent of American homes are electrified. These are mostly in the South, and most use inefficient baseboard heating rather than efficient heat pumps. Some 48 percent of homes use natural gas, which dominates in every region except the South. 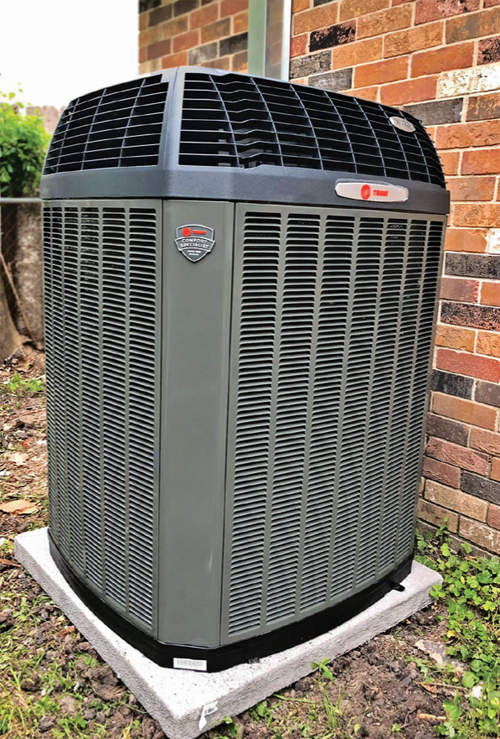 Essential upgrades. Newer heat pumps such as this XV20i model from Trane offer 21 SEER efficiency and include variable speed motors. They can operate efficiently in extreme cold and heat.

So here we are, with millions of homes using outdated, energy-guzzling technology, dependent on natural gas or oil. The shift has begun, but we all need to move faster. Every new home should have fossil fuel independence built into its design. Heat pumps offer a giant leap toward that goal.

If I sound evangelical about this technology, it’s because unlike fossil fuel appliances, heat pumps offer a rapid pathway to all-renewable energy. I’ve focused on HVAC because it’s the big energy user in our buildings, but other technologies deserve kudos, too. They have made all-electric, net zero living an achievable goal.

It’s naïve to suggest that the transition to an all-electric society will be painless and easy. Many codes and regulations are written in such a way that they slow adoption of electric technology or reward fossil fuel dependence. But with the upheavals now occurring, these begin to look like speed bumps, not unbreakable barriers.

As politicians try to convince us of the fantasy of a deregulated utopia, we’re seeing the truth behind the illusion: pollution, pandemics, and economic ruin. The building industry doesn’t have to follow this low road to nowhere.

We have the tools, the know-how, and the motivation to step forward and make positive change in our industry—one of the few sectors of the U.S. economy that has remained relatively strong throughout this devastating and terribly mismanaged pandemic. Let’s go down in the history books for the way builders, architects and developers led the U.S. through one of its toughest periods, by building a fossil fuel-free society for future generations.