The Case for Electric Living

Converting a fossil fuel-heavy home to an all-electric design takes time, but when it’s done, there’s financial and environmental satisfaction.

These seven anticlimactic words in a phone call to our natural gas company marked a momentous achievement for my family—the final black pipe carrying fossil fuels deep from North Dakota Bakken fields into our home has been shut off.

Our middle class family of three, living in a 1980s ranch home, has electrified everything. And in doing so, we’ve joined a movement—a green energy strategy—with three fundamental tenets:

Follow these three tenets and you can have your modern comforts “cake” and eat it, too. Enjoy the fruits of technological progress and stop sending greenhouse gases into an ever-warmer atmosphere [over] the next 100 years.

We were already believers in number 1 and it took us six years of lackadaisically working to electrify everything to officially achieve number 2. We’ll check off number 3 later this year.

Electrifying everything has been neither expensive nor difficult. It has basically meant replacing old, inefficient gas appliances at the end of their lives with new, energy-efficient electric ones. 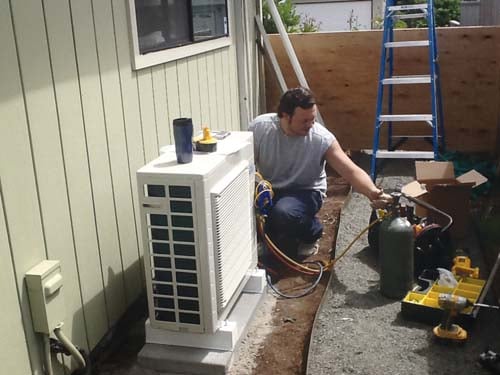 An electric heat pump’s ability to move hot or cool air from one place to another makes it invaluable in the effort to turn a house fossil-fuel free.  Photo courtesy Joe Wachunas

We happened upon this strategy when we bought our house in 2012. Immediately after moving in, we decided to turn the garage into an apartment, which meant replacing a 20-year-old furnace that was taking up valuable real estate.

By removing this old heating system, we explored cleaner alternatives and discovered heat pumps, which would become a fundamental part of our overall electrification strategy, and give us the option of air conditioning in addition to heat.

[Because] heat pumps move hot or cold air rather than create it, they can find heat even in air that feels cold, and lure it in. This makes them extremely efficient—at least four times more so than electric resistance heating and natural gas. Heat pumps run on electricity, but sip it like fine wine rather than chug it like cheap beer.

Refrigerators and air conditioners are heat pumps, so the technology is proven and widespread. When heating a space, the direction is reversed to pull the heat into a space rather than out of it.

Our system includes two interior, wall-mounted “heads” that bring in warm (or cool) air captured by a compressor placed outside. Our trusty heat pumps were cost equivalent to a new fossil fuel furnace, and have been keeping us warmed and cooled, with electricity, for over six years.

The heat pumps proved to be a huge success. We knocked out a chunk of our natural gas usage and still had lower-than-average electric bills, despite using electricity to heat our home. 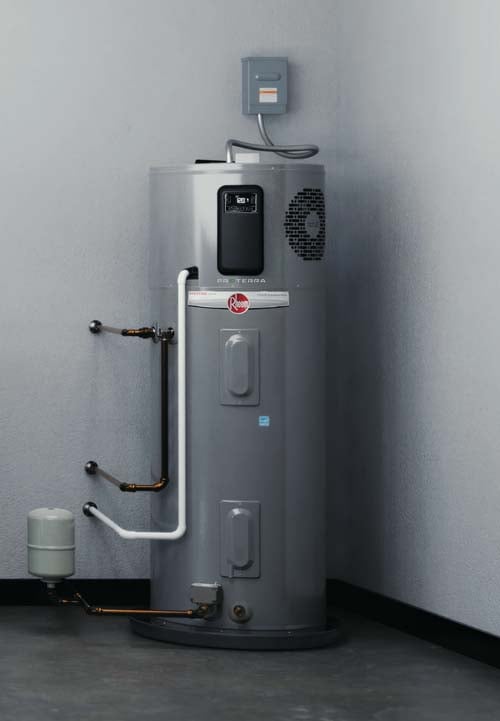 A heat pump water heater, such as this ProTerra model from Rheem, pulls warmth from the surrounding air and dumps it--at a higher temperature--into a tank to heat water. This makes it two to three times more energy efficient than a conventional electric resistance unit.  Photo courtesy Libby Lasseigne/Rheem Manufacturing

The next gas user we tackled was the hot water heater. Like our furnace, this 20-year-old appliance was approaching the end of its life. It was also responsible for a ton of our energy use (18 percent in the average home) and excessive carbon emissions (3,000 pounds per year). While researching electric alternatives, we happily discovered that the heat pumps that were magically heating our home by pulling heat from cold air could also be used to steam our showers.

But we had to venture into uncharted territory. Heat pump water heaters were (and still are) new enough that I had a hard time finding a contractor who was familiar with them. I did much of the research myself. We had to become early adopters and embrace a relatively new technology.

In this case, the reward for our risk was huge. This incredible water heater uses a quarter to an eighth of the energy of a “standard” (electric resistance or gas) hot water heater. This translates into savings of $200 to $400 dollars per year. Like the ductless heat pumps on our walls, there is little difference in the initial cost of the technology and we still enjoy all the hot water we want.

While these water heaters may seem too good to be true, I can personally testify to their awesomeness. Beleaguered friends, whom I regularly bombard with statistics and tours of my utility closet, ask why they haven’t heard of these before.

Heat pump water heaters have the potential to be game changers in our climate crisis, given the large amount of energy and CO2 emissions they save. I love ours so much that I installed a second one in our garage apartment. This [unit] not only produces hot water for showers but also heats the entire apartment through a hydronic radiant floor heating system.

The next front in the battle to rid the last bastions of fossil fuel energy from our lives took place in the kitchen. Again, we discovered a new(ish), efficient and electric technology—induction cooking.

Induction cooking changes everything in the kitchen. Before, our choices were gas or electric coils. Both are inefficient, but gas had the upper hand due to its cozy flame and ability to quickly control temperatures.

Turns out, induction stovetops match gas in their ability to quickly change and control heat. They also create heat far more quickly and can boil six cups of water in three minutes. The technology creates a magnetic field that directly heats iron in pans, so rather than heating the space under a pan, it heats the pan itself. Induction stoves are also the safest.

The cooktop is not hot to the touch unless you put a magnetic pan on it, and the burner turns off automatically after 10 seconds when it doesn’t detect a pan. This was a big win for our toddler!

If you’re looking to electrify everything, this efficient, safe, responsive cooking technology allows you to leave gas behind and cook food in a cleaner, electric way.

As we’ve been electrifying our house, we’ve also been increasing the energy production on our own roof. It amazes and excites me that I live in a time where this is possible. In decades past, even the most-staunch environmentalist was mostly dependent on large power plants and couldn’t imagine being an independent, clean energy producer.

But with solar, I have this option. I can invest in stable, lucrative and local energy production. I can be my own power provider, getting in on action that was once reserved for institutional investors and big corporations.

The financial return on our investment has been amazing. We paid $12,000 down in two separate system leases (7.2 kilowatts [kW] and 28 panels total) and received all that money back in Oregon income tax credits over eight years. We took part in an interesting pricing structure called a “prepaid power purchase agreement.” Not only do we get our initial investment back in state tax credits but we also receive free solar power for 20 years, which is about $20,000 in free electricity!

Incentives and price structures change all the time, so I don’t think we’ll be able to take part in something so lucrative this time, but whatever the cost structure looks like, we’ll be thrilled to increase our personal energy generation and have it power our electric home.

Our home will, at long last, be “net zero.” We produce more energy than we can consume in the summer and get credit for it in the winter when we aren’t producing as much as we need. Over the course of a year, all the electricity we consume will be produced on our property.

Our story demonstrates that a normal, middle-class family can achieve a carbon neutral home relatively easily, while saving money and relishing in the satisfaction that we are doing our part to fight climate change through these normally overlooked household systems.

Joe Wachunas lives in Portland, Oregon, and works for the nonprofit Forth, which promotes electric transportation. He is also involved with Electrify Now, which offers educational resources on electrification. 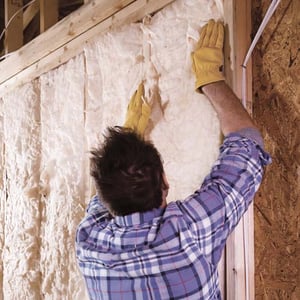 You can electrify everything and still squander it away like tokens at Chuck E Cheese. Equally, if not more, important to electrifying our homes are strategies to use energy wisely.

Well before our electrification campaign, we learned to identify the electricity hogs in our home and either not use them or use them as efficiently as possible. We have a whopping six people in three separate units on our property. In addition to our family of three, we have a long-term tenant in our garage rental apartment and [a rental] that accommodates two guests. And still, our house uses only 51 percent of the energy of an average home in the United States. Per person, we consume only 22 percent.

These strategies may sound insignificant and/or cumbersome, but they are impactful ways to substantially reduce energy consumption and the climate impacts caused by it. Combined with our [other] efficient electric technologies, “Tenet Three”—myself, my wife and our daughter—becomes possible. 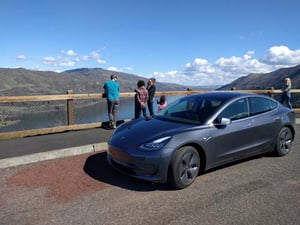 With our electrification project gaining steam, we were hungry to cut out even more fossil fuels. The obvious next step was transportation. My family is lucky to live in a dense, urban area with amazing options for walking, running, biking, scootering and mass transit. But we also use a car and the cleanest way to fuel it is with electricity.

Not only does its electric motor drive extremely smoothly, but it will virtually never need maintenance and “fueling” it is ridiculously cheap. I spend about 75 cents for a gallon equivalent (30 miles of driving). To drive our average 6,000 miles a year, we pay only $150. Gas, for an equivalent car, would be four to five times that amount.

Plus, when I charge my car while the sun is shining, I have an immense and indescribable satisfaction that the solar panels on my roof are fueling my transportation. I am my own oilman, refiner, gas station and energy producer.