The combination of wifi sensors, graywater systems and smart irrigation offers a lifeline for besieged homeowners in parched neighborhoods.

Along with the bigger forces of Climate Change, another contributing factor to the fierce wildfires in California this month has been the dry soil conditions. Light rainfall, combined with heavy use of aquifers by large farms, has created perfect conditions for an inferno.

Stories of homeowners saving their homes by turning on sprinklers remotely are not as common as they should be--but they do happen. For example, an Australian man watched a wildfire approaching via video surveillance on his smartphone, and saved his farm by turning on the sprinklers with his Rachio smart irrigation app. Systems such as Rachio could easily be automated to respond to wildfire threats. Because the technology integrates with Amazon Alexa, outdoor sprinklers could be part of a simple fireproofing “routine” activated automatically when certain conditions are met. What conditions? Heat, for example. Simple sensors exist, such as the Temp Stick, which can send a WiFi signal when temperatures above a certain threshold are sensed near the home.

Not only lawn sprinklers could be triggered, but additional water lines designed to soak down the entire home. This isn’t something that’s normally in place, but perhaps it should be.

John Cook, a structural engineer with Rohnert Park-based MKM & Associates asserts that such exterior sprinkler systems, combined with non-flammable cladding and roofing, could save many homes.

“Each home or commercial building could have its own koi pond or pool,” he told the Sonoma News. “If automated sensors detect heat from oncoming flames, perhaps 250 °F, a pump draws water out of the pond and sprays it over the building. Water running down the sides of the structure would collect in concrete troughs that carry water back. A pump could have automated backup—generator or batteries in case of power failure.”

Not everyone has a pool or pond on hand, let alone a generator, of course. Let’s deal with the water issue first. In drought-stricken areas, one alternative to a pool for water storage alternative is a standby reservoir/water tank filled with recycled graywater and/or rainwater.

One problem, in the past, with graywater, has been contamination and odors. But a company called Nexus eWater has developed a multi-tiered treatment that breaks down soap, filters, adds air and kills bacteria with UV disinfection. It will process about 200 gallons of used shower, sink or dishwasher water a day, so homeowners can easily store a couple thousand gallons in the basement or underground. Tanks are available and relatively affordable from agricultural suppliers. Excess graywater can be used for landscape irrigation and automatically kept capped off and monitored at a certain level, thanks to remote WiFi gadgets that are now available to track water depth in cisterns. Note that these devices are relatively new, and might require some programming expertise to make them “speak” to smart home networks such as Alexa.

Another way to squeeze the most out of water supplies to maintain a reservoir is to identify leaks and water guzzlers. A new technology from Uponor called Phyn ties in to the home’s main water supply, and identifies leaky irrigation lines or other water wasters.

Keeping the Power On 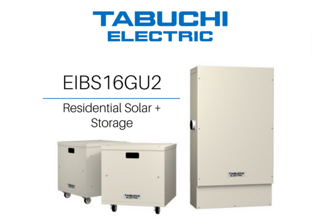 Of critical importance with any high-tech solution, of course, is keeping the power on. What if all the transformers for miles have burned out, and the house is isolated?

The answer, of course, is an emergency power backup. Most people think of a gas or natural gas generator system first--but storing tanks of highly flammable fossil fuels on site could be folly. Fortunately, solar-battery backups have dropped tremendously in price. There’s a system from Tabuchi Electric, for example, that stores enough power to run all of your water pumps and smart systems for several hours--and the batteries are expandable.

There’s another likely issue. If the power lines are down, so is the internet. This would essentially leave any web-enabled system without eyes or ears. One possible workaround would be to install a portable WiFi hotspot that is cued up to turn on if and when the power goes down.  This would switch the data source over to cellphone towers. All of the web-enabled devices in the house would automatically sync up with the new wifi server.

Of course, simply soaking down a home and its environs is not a failsafe against a powerful blaze. Homes can be built of block or brick, with metal or clay roofs, that are virtually impervious to fire. But windows and doors remain vulnerable. One option, according to Cook, would be to cover them with metal shutter systems. These, of course, could also be automated, and even added to single routine through a system such as Alexa. A single voice or remote command such as “Alexa, lock down for wildfire,” could trigger sprinklers, shut the external blinds, and turn on the backup cellular modem.

This technology and products already exist. In fact, we have integrated most of them into a demonstration project called the Flex House, that we will be displaying at the CES 2018 Exhibition in Las Vegas in January. It’s a home that is designed for wildfire resilience, with fiber cement siding, smart irrigation, graywater recycling and dozens of other high-tech features.

For those who can’t make the show in person, the complete video tour of the Flex House will be available after the show at this url: https://www.greenbuildermedia.com/flextour

Be sure to add your email so you can be notified when the tour is live.