One of the “Holy Grail” technologies that has been just around the corner for the past few years is finally hitting the mainstream: solar powered air conditioning and mini-splits. As record heatwaves stretch across the United States this summer, the rationale for this technology has become even more urgent.

To understand why these solar energy powered units have not been available up until now, you need to understand the two major technical challenges they’re up against. First, the sun only shines for half of every day, so unless you have a storage system, a solar cooling unit won’t operate at night. Second, typical heat pumps require a lot of electricity to generate cool temperatures.

Fortunately, the last couple of years have seen major advancements in performance, along with energy storage and some mini-split heat pumps now come with variable speed compressors, so they’re able to operate on a sliding scale of electricity.

The trick to making a heat pump solar air conditioner work with pv panels is (first) to find a pump with extremely good performance. In the Heating Ventilation and Air Conditioning (HVAC) world, this is measured as Seasonal Energy Efficiency Ratio, or SEER. This measures the ratio of the cooling output of an air conditioner divided by its energy consumption in watt-hours over a given season. Anything in the upper teens or higher is really good. 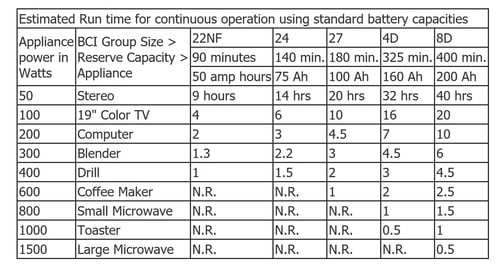 Short Run Blues. As you can see, operating a 700-watt solar powered ac unit with a typical 12-volt battery would drain it in less than an hour. You’ll need a bigger battery bank or a better solution for nighttime cooling with solar. Source

No matter how efficient a solar powered air conditioner is, however, it faces the frustrating Achilles Heel of all solar technology: battery storage. PV panels only convert energy during daylight hours. So if you want to run the air conditioning unit at night, you need some kind of battery storage. But battery storage, despite many improvements, is either expensive or inadequate for all-night cooling.

The Hybrid Option: Solar Plus Convenience

A company called Greenpath Technologies, Inc. is selling a Chinese-made brand of SEER 35 mini-splits called LEZETi. They're not the only players in this new category (see chart below,) but let's focus on them for the purpose of discussion.

One unit they offer is a "solar hybrid air conditioner." Should you consider going with one of these solar-powered ac units, instead of some other A/C-only brand of mini split? It depends on the end user's lifestyle and expectations. 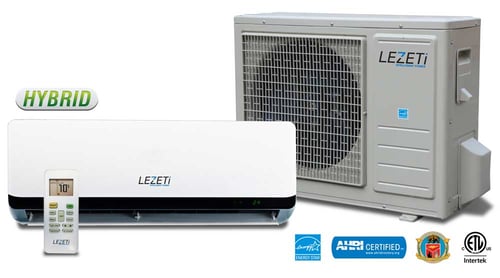 The benefit of a hybrid solar powered air conditioner is that it does not require batteries. Instead it's tied in to 220/240 volt grid power, and does not require a special contract with the utility, because it does not backfeed power to the grid. It taps into the home’s hard-wired power connection automatically when the sun stops shining. It requires about 885 watts of power for peak cooling, so PV arrays can be quite small. As for capacity, one unit can cool about 750 sq. ft. in a well-insulated building.

Sizing the PV array to supply "just enough" electricity to power one of these solar air conditioners could be what pushes these units into the mainstream. Someone who wants to dabble in solar can put up three panels and start saving on electricity right away.

Solar powered ac offers an affordable way to bring net-zero HVAC to homes all over the world, and could be a real game-changer. The biggest advance, of course, is in the efficiency of mini-splits. A few years ago SEER 35 seemed like an impossible benchmark. But it's the super-efficiency of the equipment that makes the case for solar power so compelling.

A few DC-only units are available at this writing, but because the power storage adds a significant hurdle to their practicality, I haven’t written in detail about them. That being said, as battery storage improves, self-contained solar air conditioners with in-home battery storage will offer the best possible solution: renewable energy from the sun, converted into electricity, with enough surplus to run a cooling unit even in a period of cloudy weather.

What is a solar powered air conditioner?

This term refers to a variable-speed heat pump type cooling system that can operate directly from current produced by photovoltaic panels powered by the sun. In the purest sense, it’s using DC power directly, without the power loss associated with an AC-DC inverter. The term is often used in other contexts that are less specific. For example, in a building with a solar array and a DC-AC inverter, a heat pump might be said to be operating on solar power.

How is a hybrid solar air conditioner different from a standard heat pump?

A hybrid solar ac unit has the ability to operate in two modes, as a direct DC system when the sun is shining, and as a hybrid DC unit by means of an inverter whenever the sun is not shining. If the PV panels are dedicated to cooling only, the PV array does not need to be connected to the local utility’s grid power.

Why have solar powered air conditioners taken so long to come to market?

A couple of obstacles slowed their adoption. First, because solar power is inconsistent, it did not work well with single-speed compressors (part of heat pump cooling systems). Newer compressors operate with nimble, variable speed fans, much more conducive to direct power by solar panels.

How many solar panels do I need to run an air conditioner?

With an efficient cooling system for a small home or studio apartment, you could get by with about three panels rated for 320 watts each. Window air conditioners are generally about one-third as efficient as heat pump air conditioners, so think twice before trying to power one with solar. They use 500-1,400 watts each. For the same 500 watts of power, a heat pump produces three times as many cooling btus. Standalone heat pumps with high SEER ratings, in the 18 to 27.5 range can be operated with under 1,000 watts and cool 750 sq. ft. or so.

This article was originally published March 1, 2017.  It has been updated and republished with new information to reflect changes in the technology and products.