Getting to zero carbon requires lowering the embodied carbon in a building as far as possible and then offsetting that carbon with renewable energy, a process we discuss in detail in a previous post. If you have calculated and reduced the embodied carbon in your building plan, the final step is to calculate and then install sufficient solar panels to offset the building’s embodied carbon. Using the data from your embodied carbon life cycle assessment (LCA), you can determine how many solar panels will be needed to produce all the electricity needed by the home or building and to compensate for the embodied carbon of the building materials and construction. Installing the calculated excess solar capacity will allow you to export sufficient renewable energy to result in zero net carbon emissions for the project. Remember to include the carbon footprint of the solar panels in the LCA. If installing the full amount of solar panels on site is not feasible, off-site solar or carbon credits can fill the gap. 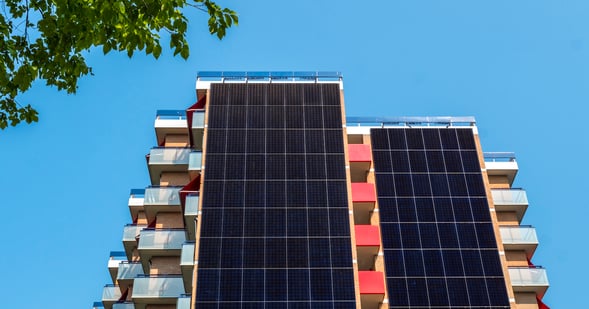 Calculate the Energy Equivalent of the Embodied Carbon

After designing a zero operational energy home and the reducing embodied carbon as far as possible, using carbon life cycle analysis (LCA), the last step is to calculate the solar capacity needed to offset the embodied carbon in a building. To do this you will need two figures: the total weight of embodied carbon in the building and an estimate of the carbon per kWh released by the utility. The LCA will usually show the weight of the carbon embodied in the building materials and processes expressed as pounds, short tons, kilograms or metric tons depending on the information source.

On average in the U.S. each kWh of electricity produces about one pound of carbon. Despite the growing interconnection between utilities and regional electricity grids, there is still wide variation in the amount of CO2 produced across the country. When possible, we suggest using an emissions figure for the specific utility serving the site. A 2016 report, called Benchmarking Air Emissions, shows CO2 emissions for the 100 largest electricity generators. Find your utility’s emissions on page 4, Table 2: “Emission Rates” “All Generating Sources”. If the specific utility for your area is not shown, state averages can be found on page 27 under the “All Sources CO2 Emission Rate” column. Alternatively, you can call your local utility and ask for the average pounds of CO2 emitted per kWh of energy produced. Some utilities, such as PG&E and Xcel Energy even include this information on your energy bill or on their website.

Finally, calculate how much photovoltaic capacity will be needed to generate that same amount of energy over the 30-year service life of the average solar panel, offsetting the total embodied carbon impact by the time those panels need to be replaced. The average new 300 Watt solar panel produces about 500 kWh of energy per year or 15,000 kWh over the 30-year life of the panel. So to offset the embodied carbon in a new average home you would need about 15 more panels (220,462 kWh divided by 15,000 kWh = 14.7 panels) in addition to those needed to get to zero net energy for operations. That’s a significant solar array and good reason to lower the embodied carbon in a building by working with the LCA during the planning process and selecting lower carbon materials. The goal should be to get to net zero operational energy and net zero embodied carbon with the fewest number of additional panels needed.

Because the amount of solar energy varies with local climate and site conditions, it’s best to get an accurate solar estimate for the building site rather than using the national average. Consult a solar contractor, or use the PVWatts calculator, to more accurately determine how many solar panels it will take to generate enough renewable electricity to cover both the embodied carbon and the operational carbon of the home or building.

Having designed and modeled a zero energy home, after cost-effectively reducing its embodied carbon as low as possible, and after installing sufficient solar panels to offset the operational and the embodied carbon, you will essentially have a zero energy and a zero carbon home.

If you are a builder, designer, or homebuyer, reality is calling us all. If we follow the data, the need to get to zero carbon by 2050 is clear. We must begin down that path now with every choice we make. Members of the construction industry and homebuyers are uniquely placed to take the lead in moving us all on the path to zero carbon, using tools that are readily available. Those who choose to go down this path to zero carbon can be proud of their pioneering decision to help show the rest of us the way.

This article was republished with permission and originally appeared on the Zero Energy Project website.