It's time to address the overuse of chemicals in our nation's backyard pools.

James Robyn likes to show people a photo of a natural swimming pool next to a conventional chlorine model. It was built in Germany for customers who couldn’t decide which they wanted. The difference is striking. The natural pool is a green-hued swimming hole bordered by a water garden, a stark contrast to the conventional model’s blue sterility. “We call the chlorine pool the Windex pool,” he says. 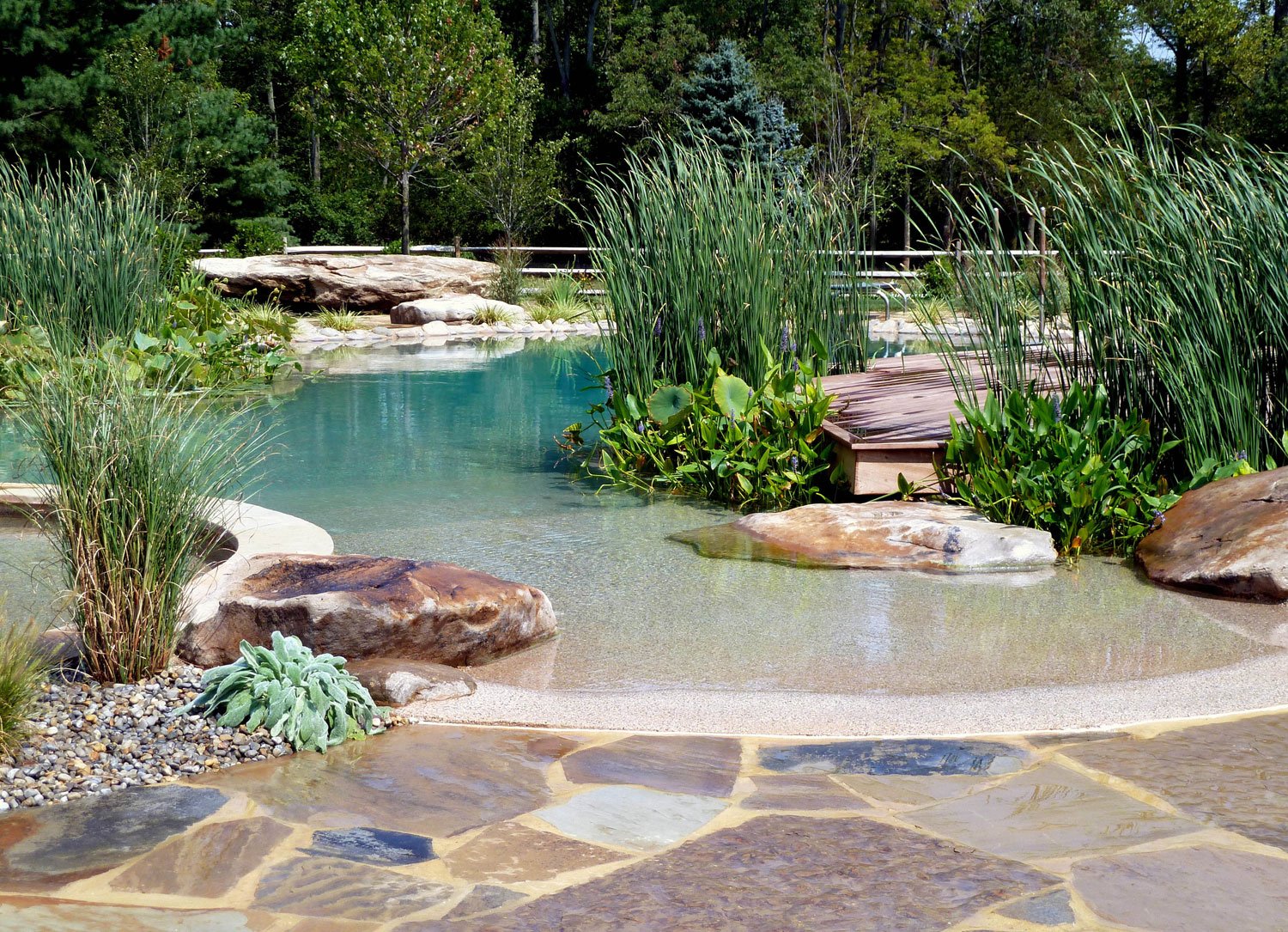 Wet and Tame. Although they require careful maintenance in the early stages, no-chemical pools can be both beautiful and functional. This one is from BioNova, one of the best installers of natural pools.

Robyn is president and CEO of Hackettstown, N.J.–based BioNova USA, one of the few American companies that design and build natural swimming pools, or NSPs. His point is that rather than the familiar disinfected vessel—infused with chlorine in an attempt “to kill everything but the bather”—the NSP is just what its name says: a natural body of water. That’s a big draw for some people; and it’s also what makes some people wary.

How It Works
Instead of relying on chlorine to kill germs, the NSP is a chemical-free, self-contained ecosystem. A pump circulates water between a deep swimming area and a shallow filtration, or regeneration, zone—the latter a miniature constructed wetland.

In the regeneration zone, hydronic plants embedded in gravel and other aggregates encourage the growth of microorganisms that remove pollutants from the water (see sidebar). The moving water also passes through a skimmer that removes large surface debris (like leaves) and a biofilter that captures smaller ones (like bugs and hair).

The NSP is a totally closed system built over a watertight pond liner. Because it’s a closed system, the underlying soil’s permeability has no impact on its ability to keep the water clean. It also means that one can be built practically anywhere.

While all NSPs work on the same general concept, they come in a seemingly infinite range of shapes, with a variety of plants and rocks, and can include special features such as streams and waterfalls—which are often part of the pool’s operating system. Materials also vary: For instance the swimming area can have a hard Gunite surface or soft bottom lined with EPDM rubber.

A big division is between what Robyn calls one-pot and two-pot models. In a one-pot, the entire system is contained in a single excavation or “pot,” with a single pond liner. The swimming and regeneration zones are separated by a shallow retaining wall, its top set slightly underwater to let water flow freely between zones. 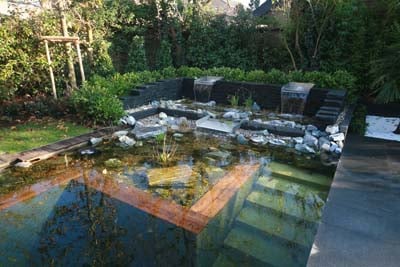 A two-pot separates the regeneration and swimming zones, putting them in separate excavations. Water can be pumped between the two, or the regeneration zone can be made lower so that water can flow there by gravity, although it still must be pumped back to the swimming area. 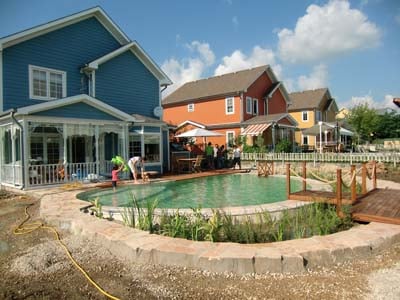 The two-pot costs more but is preferred by those who would rather not swim with plants and, according to Robyn, offers somewhat better water quality. And the swimming area in a two-pot can be made to look like a conventional pool, for those who prefer that look. It also lets the homeowner transform a conventional pool into an NSP, by building a nearby regeneration zone and modifying the pump system to circulate water through it.

Depending on design, the size of the regeneration zone will range from 50% to 100% of the swimming area, which means you need 1 ½ to 2 times as much yard space as a conventional pool for a given swim area. The NSP also needs a minimum size to work effectively. Robyn recommends at least 500–800 square feet of total area (swimming and regeneration zones) depending on the design. Smaller pools can work, but they’re more expensive to build and pose more of an engineering challenge. “The larger ones get biological momentum,” says Mick Hilleary of Total Habitat, a pool builder and consultant from Bonner Springs, Kan. He says that with a smaller water area, he tends to supplement the natural filtration with a carbon filter.

When people first hear about this technology they almost always raise health concerns. To address this, Morgan Brown, president of Whole Water Systems, a Seattle company that builds NSPs and water features for eco-resorts, encourages people to think of the NSP the same way they would a small lake or pond. “Natural bodies of water are effectively cleaned by wetlands, and it’s the same with an NSP.”

He says that an NSP is better equipped to handle a sudden increase in bacteria, as when a toddler goes in the pool and soils his diaper. In a conventional pool, the usual response is to shock it with toxic levels of chlorine, but with an NSP that’s not necessary. “The bacteria say ‘Whoopee—a bit more food,’ and quickly clean it up themselves, just like in a natural lake,” says Brown. He adds that NSPs typically have half the E. coli levels considered safe for lake swimming, and that long experience in Europe proves their safety. “There’s never been an incident of anyone going over the limit of E. coli in Europe. Why? Because the water is constantly circulated through a wetland.”

Some people also worry about algae that can appear on the surface of an NSP right after installation and in the early spring. This is nothing to worry about, Robyn says. “A week later, the plants will start doing their thing and clean it all up.” If the wetland is properly constructed, the pool’s ability to keep itself clean will improve with age, once the plants have had a chance to mature.

How Much Will It Cost?

Costs vary widely. Robyn says that the square foot cost of an NSP is the same as for a conventional pool, but that includes the regeneration zone, so total costs can be 50% to 100% more. The final price tag will depend on lots of variables, such as the surface material (Gunite or EPDM) and where the pool is located. As a rule, you need a bigger regeneration zone in warmer climates. “In cold climates the [bacterial] load is smaller so you need less media,” says Hilleary. “If we’re building a 30,000-gallon pool in Canada in the shade, we design the regeneration zone for 30,000 gallons; for the same pool in Florida in full sun we will design it as if were 60,000 gallons.”

Robyn finds that people often opt for a smaller swim area to keep costs down. “Take someone who was considering an 800-square-foot swimming pool for $80,000. In order to get a natural pool they are often willing to scale that down to 550 square feet of swim area, with 400 square feet of filtration for a total cost of $90,000.”

One challenge to getting a natural pool is that few U.S. companies specialize in building them, so many homeowners or general contractors may consider doing it themselves. There’s a lot of information available in print and online, and many homeowners and landscape companies have built pools in Europe, but experts disagree on whether the DIY approach is a good idea.

Peter Petrich, whose Austrian-based company Biotop built the first pools in Europe, says that DIY pools often don’t work as well as they should because they don’t have the optimal regeneration zone with the optimal plants for the particular building site.

“It is much more difficult to build a natural pool than many assume,” he notes. “Just excavating a hole, putting in a liner, planting a few water plants, filling it with water and adding some decking is not enough. The secret lies in the knowledge of the complex relationships in natural water.”

Hilleary disagrees. In fact, he sells a detailed step-by-step pool construction guide on his website and says that many general contractors and homeowners have built well-functioning NSPs. Some have opted to do the work themselves and hire him as a consultant.

Regardless of who builds it, most jurisdictions don’t require special permitting for an NSP and, other than safety rules such as the requirement for fencing, there tend to be few restrictions when building one on a private residence.

Living With an NSP

The cost of operating and maintaining an NSP should be lower than for a conventional pool. Owners need to empty the skimmer periodically (every week or month, depending on local conditions) and vacuum the pool at least once a season. They will also need to do some plant maintenance at the end of the season. “I used to spend $650 per season in pool chemicals,” says Hilleary. “With a natural pool you don’t have that cost.”

In cold climates, the plumbing and pumps serving the NSP need to be winterized. Although the swimming zone can be covered with a winter cover, many owners leave their pools open. Some even use them as skating ponds. It’s part of a mind-set that understands the NSP as a natural feature. Says Brown: “Instead of trying to make everything dead, you get to enjoy a healthy body of water that takes care of itself.” 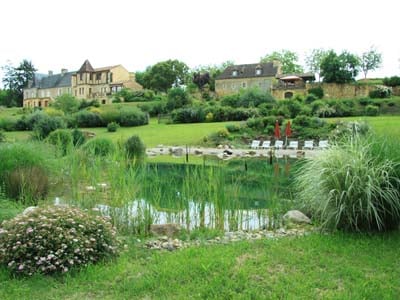