Mitsubishi Brings HVAC Systems to the Next Level

Searing summer days will be a problem of the past for ReVISION House Scottsdale, as new HVAC upgrades keep inside temperatures consistently comfortable.

Steve Easley, owner of ReVISION House Scottsdale, is a big supporter of electrification and the decarbonization of the economy. He pushes for this integral transition since "air pollution is responsible for over 350,000 premature deaths in America each year. To put that in perspective, that's how many people in America died from COVID-19 [in 2020]," Easley points out.

Easley moved away from fossil fuel dependence and selected Mitsubishi's HVAC equipment for all-electric heating and cooling. ReVISION House Scottsdale previously demanded 96,000 BTUs of air conditioning in the summer months, but energy improvements and efficiency upgrades will cut this number by nearly half. 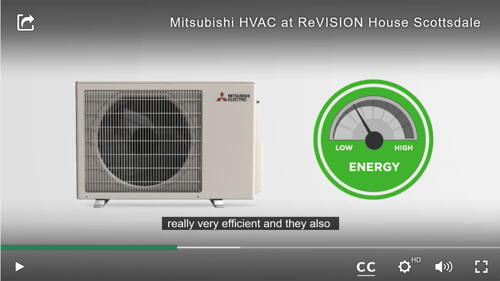 Using a combination of ducted and ductless systems, the Mitsubishi HVAC will have six different zones to efficiently heat and cool rooms based on use and preference.

Easley's new Mitsubishi Electric multi-split heat pump uses refrigerant to move outdoor heat energy indoors to keep his home warm. The system reverses and provides air conditioning in the summer by removing inside heat and releasing it outside.

Using a combination of ducted and ductless systems, the Mitsubishi HVAC will have six different zones to efficiently heat and cool rooms based on use and preference. Also, Easley's great room will have a ceiling cassette with 3D i-see Infrared Sensor Technology. This feature scans the room to detect temperature variations and occupants, and adapts appropriately.

With Mitsubishi's help, Easley won't have to worry about whether or not his HVAC can stand up to the intense Scottsdale heat. Watch the video to learn more.