As supply shortages impact lumber, hardware, and other goods, high-performance alternatives can solve some problems, but not all.

In the second quarter of this year, Home Depot, according to a presentation by company CEO Craig Menear, reported double-digit customer traffic increases over the previous year, and 23 percent higher spending. Lowes reported similar, record-breaking earnings. 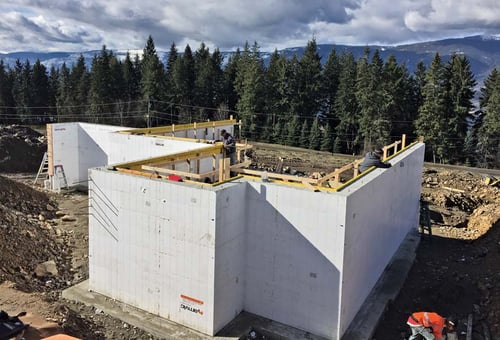 But all is not well in the building supply universe, at least for the professionals who rely on the same shortlist of products, year after year. In the new normal of topsy-turvy supply chains, prices and availability of goods have become unpredictable. For small companies, especially, staying solvent may mean looking beyond the normal comfort zone, at products and systems that are well established and less volatile.

The long isolation of quarantine at home, coupled with the initial flood of stimulus money, created a burst of remodeling activity—especially outdoor decks and patios.

In Pittsburgh, for example, the Post-Gazette reported in July on big price hikes for pressure-treated lumber, aluminum decking, and the related hardware. “Anything deck-related is up 50 percent,” says Robb Ciotti, general manager of South Side-based Allegheny Millwork and Lumber. “The prices are rising so quickly, some people feel like you’re price gouging.”

But it’s not just decks feeling the lumber pinch. It’s dimensional framing, the predominant framing choice for new construction. New data from the NAHB finds that since mid-April 2020, the composite price of lumber, per Random Lengths, has soared more than 170 percent. This surge is adding approximately $16,000 to the price of a new single-family home and more than $6,000 to the average new apartment. 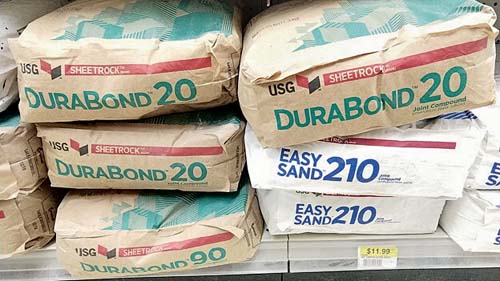 Meaning in the Missing

The first products to run out may reveal what experienced pros use most.

This is a ripe time for product behavior researchers to gain some insights into who’s buying what and why, simply by visiting the nearest building product box store.

For example, one Home Depot had plenty of 20-minute and 210-minute joint compound (often called “hot mud” by the trades) available, but was notably short on 45-minute bags. This suggests a prosumer or trade buyer. Most won’t use 20-minute hot mud for anything except hole patching. It’s too unforgiving. And in most cases, a 210-minute drying time doesn’t make sense for a pro. Say he or she takes all morning to mud a couple of rooms with the stuff. It will still take almost four hours to dry, so sanding or a second coat can’t happen until the next day anyway.

The NAHB blames the lack of adequate lumber supply on Canadian tariffs and the fact that the mills guessed poorly about the impact of the pandemic. The owners reduced hours and staff, only to be swamped with surging business.

But for makers of other structural systems, this might be a game-changing moment. Insulated concrete forms (ICFs), for example, have not seen significant price hikes, which means they’re vastly more affordable than lumber framing. In normal times, ICFs cost about 15 percent more than 2-by-6 wood framing, according to Amvic, an ICF manufacturer. But with lumber at 170 percent of the normal cost, that figure now seems irrelevant.

Of course, ICFs depend on the availability of concrete for their assembly. To date, shortages of cement (the key component of concrete) appear to be localized, and prices went up only about 20 percent over 2019. The supply is something to watch, however, as much of our cement comes from India and China. The fact that China tamed the coronavirus quickly may, despite our government’s anti-Chinese rhetoric, be helping the U.S. building industry keep moving.

Other alternatives to lumber include factory-built panels and structural insulated panels (SIPs). The labor savings are clear. But these products depend on panels made with oriented strand board (OSB), which has jumped in cost by more than 100 percent in the United States. One variable is whether the SIP or panel manufacturer was able to stockpile the material in advance of market pressures.

But it’s not just the pandemic that has squeezed OSB supplies. It’s also climate change. For example, Norbord temporarily stopped production of OSB at one of its large plants in British Columbia because it could not obtain enough raw materials. The company blamed wildfires and severe weather conditions during the 2019-2020 winter.

The higher cost of materials alone, according to some small contractors, may not be a deal-breaker for clients. But their vulnerability is more complex. When key materials run short, there’s no safety net to keep jobs in play. Their limited access to capital, along with municipal delays, compounds the damage.

“It’s more about ‘can we get the materials?’ than cost hikes,” notes Jon Stansel, of CJ’s Custom Carpentry in Oxford, Maine. “We have to provide a lot more time than normal to submit drawings and get permits now, too.”

That permitting lag can make or break small building firms who lack the capital to pre-purchase materials and stockpile them. Portland, Maine, for example, has a disclaimer on its permitting and inspections website:

“Due to an increase in development activity, we are experiencing high application volumes, causing longer than normal review times.”

Not knowing whether a job can commence in two weeks or two months means waiting to take a deposit, waiting to purchase materials, risking a major price spike after the contractor has already given the client a good faith estimate based on stable prices. Clients may refuse to pay the new price, or simply halt the work.

“It’s hard to stay ahead of it,” Stansel says. When someone cancels a project in this environment, “that’s the kind of email I hate,” he adds, “but it’s understandable.”

Not every building material can simply be replaced with one that’s equivalent (or better). Some can’t be replaced at all. For example, take a look at appliances--especially refrigerators and freezers. 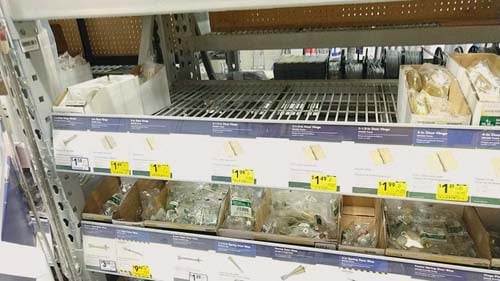 Gaps on shelves in the hardware section seem to be increasing, particularly among “staple” products such as standard door hinges—many of which are produced internationally. Will domestic manufacturers rise to replace them? If so, when, and at what cost?

Back in July, the Mercury News interviewed Martin Hartunian, CEO of ABC Warehouse. He said that the wire harnesses, switches, electrical components, and dials “are things that are manufactured overseas or in Mexico, which has slowed the production process down.” He added that GE, Whirlpool, LG, and Samsung do have some assembly of appliances in the United States, “but with COVID-19, they’ve had to rework their production lines, which has led to a drop in yield.”

A new report from NPR in early September suggests that appliances are still in short supply all over the United States. Some resellers report that they’ve had freezers back-ordered since March that have still not been delivered. Demand is way up, but shipments of appliances dropped by about 7 percent in the first months of the pandemic, as production slowed in response to the coronavirus.

Among most dealers in appliances, the assumption is that “as factories ramp back up,” availability will increase, and supply will catch up with demand. But with COVID-19 infections back on the rise in about half of the United States, along with major surges in many supplier countries (including Mexico), how confident can we be that supply will rise to meet demand? 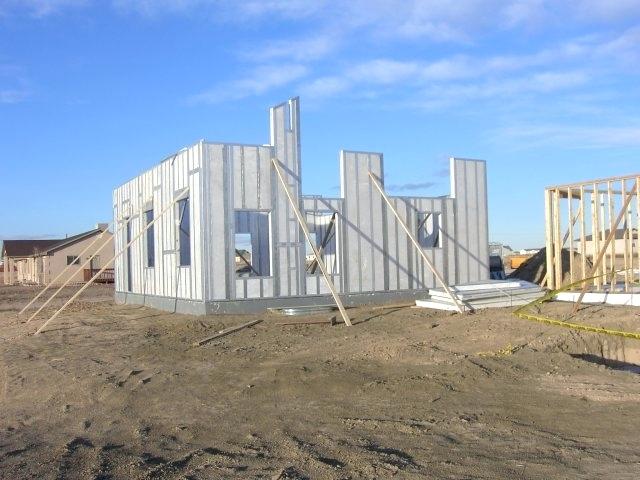 And it’s not just appliances in doubt, as we cruise into what health experts predict will be a winter more challenging than any faced in the country in decades. There is still money to spend on remodeling and new homes. Orders are strong and demand is high.

For the moment, most contractors seem able to adjust and keep working. ICFs can readily replace 2-by-6 framing. Metal or clay or concrete tiles offer upgraded roofing if asphalt prices go even higher. Substitutions, so far, have actually led to efficiency upgrades in some cases.

But we are dependent on foreign imports of materials including steel and cement. For example, we import about 25 percent of our steel from Brazil, Mexico, and Russia, countries hit hard by the pandemic—and getting worse.

Perhaps even more troubling is the “death by a thousand cuts” scenario. If building material suppliers continue to see supplies of hinges, fasteners, and the myriad small parts of a house dry up, how long can the boom continue? The next few months will tell whether our complex, global web of building products can survive the combination of a pandemic, hostility toward trading partners, and climate change, or if the U.S. homebuilding industry grinds to a crushing stop. 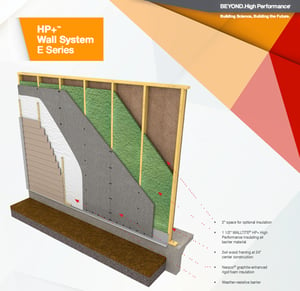 By engineering walls to take advantage of spray foam’s strength, manufacturers offer a hybrid that saves lumber and panels.

The BASF HP+ Wall system promises a strong wall with fewer dimensional feet of lumber, and up to 90 percent less exterior structural sheathing. According to the manufacturer, a 200 linear foot exterior wall could eliminate 50 sheets or more of sheathing.