It’s Time to Hasten the Demise of Natural Gas

For decades, we’ve heard about the benefits of heating our homes and water with natural gas. We’ve been told that it’s a “clean fuel,” with polite silence about messy extraction processes like fracking, as well as leaking distribution pipes. We’ve been sold on the superiority of gas cooktops and told how much “cheaper” it is to heat our homes and water with gas than with electricity.

Natural gas also has some dirty secrets. For example, new research from the National Oceanic and Atmospheric Administration (NOAA) found last year that levels of methane rose to the highest levels seen on Earth for 3 million years. And that was during the pandemic downturn. 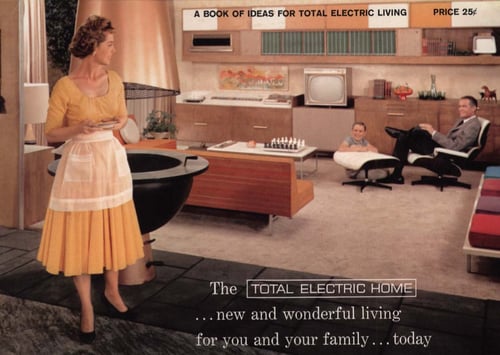 The promise of the electric home seemed within reach as early as the 1950s, but only now has home technology improved enough to make the switch from fossil fuel seamless and sensible.

Connecting the dots reveals that methane is a major byproduct of natural gas production. Meanwhile, methane’s warming impact on the earth’s atmosphere is roughly 80 times that of the same amount of carbon over a 20-year-period. A new report from the United Nations puts new emphasis on winding down the use of natural gas to reduce methane in the atmosphere.

Back in Texas, homeowners learned in February that dependence on gas and coal offers little security in a real crisis. Instead of offering a safe backup power source during the deep freeze weather, natural gas equipment froze, and gas providers exploited the chaos and shortages to send prices skyrocketing. The Electric Reliability Council of Texas (ERCOT) noted that the disaster occurred (primarily) due to frozen mechanical equipment at gas and coal plants, not because wind turbines froze over.

How big is the challenge of switching from gas to renewable, electric-based systems at the housing level in the U.S.? Nearly half of the nation’s homes rely on natural gas for space heating, according to the U.S. Energy Information Administration (EIA). With the latest equipment, however, conversion to full electric is desirable and achievable. Why? Because electricity can be produced using solar or wind technology—without fossil fuel emissions.

The first crucial step toward getting off gas and into electric, for homeowners, is not switching out the furnace. Instead, existing homes need an energy audit. New homes need careful detailing and air sealing, optimized R-values and efficient, quiet mechanical ventilation.

The upside for homeowners? When the next Texas freeze hits, their homes will be several steps closer to weathering the storm in comfort. A well-designed battery storage system, an efficient mini-split, solar panels and an induction cooktop will give a house a fighting chance.