Here's a primer on how to use concrete masonry blocks properly, to maximize durability and resilence.

What is concrete block (or cinder block) construction? Using blocks formed from concrete, which are then stacked to create a wall. They require both horizontal and vertical reinforcement, and then are filled with either concrete or insulation.

A lot of people wonder if the "age" or "time" of the concrete block home or building has come to a close, but I say no. And that's a resounding NO by the way; CBS (Concrete Block and Stucco) is here to stay. 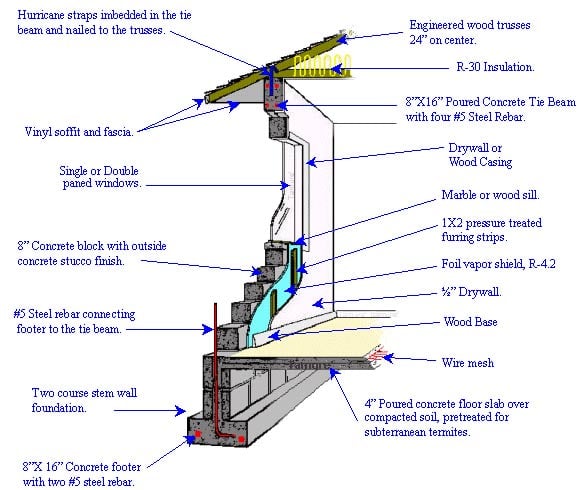 Yes there are other construction methods, some of which have been around for quite some time and some which are relatively new on the scene: wood framed, Cold rolled steel framed, red iron girder and beam frame, tilt-up concrete, Styrofoam block, poured in place concrete and wood post and beam to name a few. But concrete block remains an old standby that's hard to beat. Strength, durability, versatility, and sustainability make it an ongoing perfect choice for most construction. Even mixed with other framing methods block remains viable. It is commonly used for actual wall construction in many “red-iron” framed commercial structures of the smaller variety such as low rise and mid-rise office buildings and even residential condominiums and healthcare facilities.

Do you need to use an architect or engineer for cinder block construction?

The designer (Architect/Engineer) of any project should clearly indicate the following information on his plans:

What types of reinforcement is required for cinder block construction?

There are two types of reinforcement required; Horizontal and Vertical. Let's take a quick look:

What Do You Fill Cinder Blocks With After the Wall is Built?

The cells are then filled with either concrete or insulation and this of course is where additional insulating properties (R-Values or the measure of resistance to heat flow via conduction) are partially derived. Remember that there are vapor barriers and additional insulations used as “covering for the block in virtually all applications today. 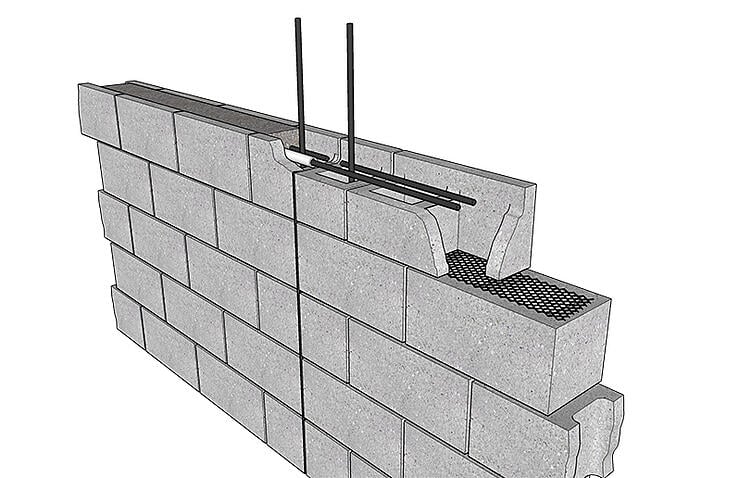 Gone are the days (pretty much anyway) where a coat of paint was slapped on the outside and “off you go”. Insulation boards and moisture barriers are available for both interior and exterior use and are the key 1 st line of defense for keeping out the enemy: MOISTURE. Anyhow, the finishes inside and out will consist of the aforementioned vapor barrier and additional insulation and then of course hand laid plaster/stucco, or EIFS (Exterior Finish Insulating Systems) on the exterior and drywall, plaster, or paneling of some kind on the interior.

Think for a moment about all of that material and the strength and insulating properties that are involved. Now I’m not saying that stick-built or other structures whether of wood or steel are lacking in any way.

They too are strong, resilient, cost effective and viable. But in my opinion, CBS (Concrete Block & Stucco) systems cannot be beat in terms of the overall combination of low cost, strength, moisture resistance, insulating properties and longevity and it’s perhaps the longevity which makes it most attractive from an ROI (Return On Investment) perspective. It is in fact one of the most used methods in the state of Florida and that’s hurricane country folks.

The R-value of block, as you can see, is not great on its own. But add rigid foam or an EIFS system to the exterior, and you can raise it significantly. But in this article I'm not talking about building with block in cold climates--rather about using block in mild, temperate regions such as the Southeast, where the benefits are significant in terms of storm resistance, rot and termite resistance, and masonry effect.

Is block still viable as a construction method? Of course it is. Even Walker's Building Estimator's Reference Book 29 th Edition still contains the entire CSI Division 4 section on Masonry Construction (Unit Construction including brick and CMU or “block”). It's also featured prominently in Division 7 Thermal And Moisture Protection. In future blogs I'll be getting into moisture protection and toxic mold, but for now let me wrap this up by saying that Conctrete Block has been around for a long time and is destined to stay around for a whole lot longer.

Author's Bio: Jack Nersinger has been a woodworker and general contractor since 1974. First licensed in the United States Virgin Islands in 1990 and then in Florida in 1998, his experience as a GC runs the gamut from residential remodeling and renovations/additions to new commercial construction including amusements rides and health care facilities  He now helps educate contractors, architects, engineers and code officials. Contact him jacknersinger3221@outlook.com