Just creating bike paths is not enough to increase ridership. You need to understand what keeps would-be bikers at bay.

hareable bikes seem to have popped up almost overnight in U.S. cities, and shareable cars may not be far behind. Transportation guru Eric Britton calls bicycles “the ultimate metro,” because they allow users to travel in urban areas at a reasonable speeds in all diferent directions without any wait time.

To Bike Or Not to Bike

What prevents people from bicycling? There are four key requirements that must be met for someone to choose to make a trip by bicycle. 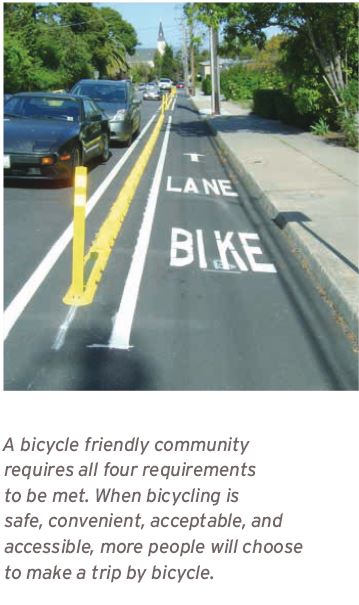 If any one of the requirements is not satisfied, a person will choose another mode of transportation, if he or she has a choice. These requirements are all important, and each one is independently necessary. In most communities, significant obstacles exist in all four areas.

Travel by bicycle must feel sufficiently safe. Safety concerns, particularly the fear of riding in traffic, are often a primary obstacle for those in the “willing but wary” group, especially women, youth, and older adults. Crime can also be a significant barrier, especially in neighborhoods with gang activity or high crime rates, and this concern may be a particular barrier for women and in communities of color.

Finally, people must have access to bicycles. If no bicycle is available, a person cannot even consider bicycling. Access issues may be most acute in areas that are low-income or lack bicycle shops. Access issues can also arise, however, when individuals do not have a bicycle with them at their point of origin or when trying to combine bicycle travel with other forms of transit, such as trains, buses, and subways.

Reprinted from changelabsolutions.org, "Getting the Wheels Rolling" (pdf here)

Research shows, however, that the reason more people in the U.S. don’t bike isn’t laziness. It’s fear. A study by Robert Geller in Portland, Oregon, discovered that only 12 percent of people are daring and fi t enough to get on a bike and engage with auto traffic, the way most cities insist they must—although fully 60 percent like the idea of biking.

Author Charles Montgomery (Happy City) blames early bike enthusiasts for insisting that bikes be treated like automobiles. The courage to pull into a turning lane in front of a car terrifi es most would-be bikers. They’re not completely irrational. One study found that when people wear bike helmets, drivers consider them armored, passing far closer to them than they will if the rider is unhelmeted.

Before you toss your bike helmet, however, other research has shown that NOT wearing a helmet may be a very bad idea.

Consider this summary of a New York City study of bike fatalities:

Nearly all bicyclists who died (97%) were not wearing a helmet.

Helmet use among those bicyclists with serious injuries was low (13%), but it was even lower among bicyclists killed (3%).

Only one fatal crash with a motor vehicle occurred when a bicyclist was in a marked bike lane.

Nearly all bicyclist deaths (92%) occurred as a result of crashes with motor vehicles.

Large vehicles (trucks, buses) were involved in almost one-third (32%) of fatal crashes, but they make up approximately 15% of vehicles on NYC roadways.

Most fatal crashes (89%) occurred at or near intersections.

The solutions to both safety issues and biker buy-in  are straightforward. Urban mobility is one key to the happy city of the future.

Either slow traffic to the point where bikers feel safe, or separate bikeways from street tra c, with raised curbs, planters or even parked cars. This limits the freedom of bikers somewhat, but tends to greatly increase ridership.

If this topic interests you, download  "Getting the Wheels Rolling" (link in sidebar at right)  which details public perceptions of bike riding and how public policy can overcome them. 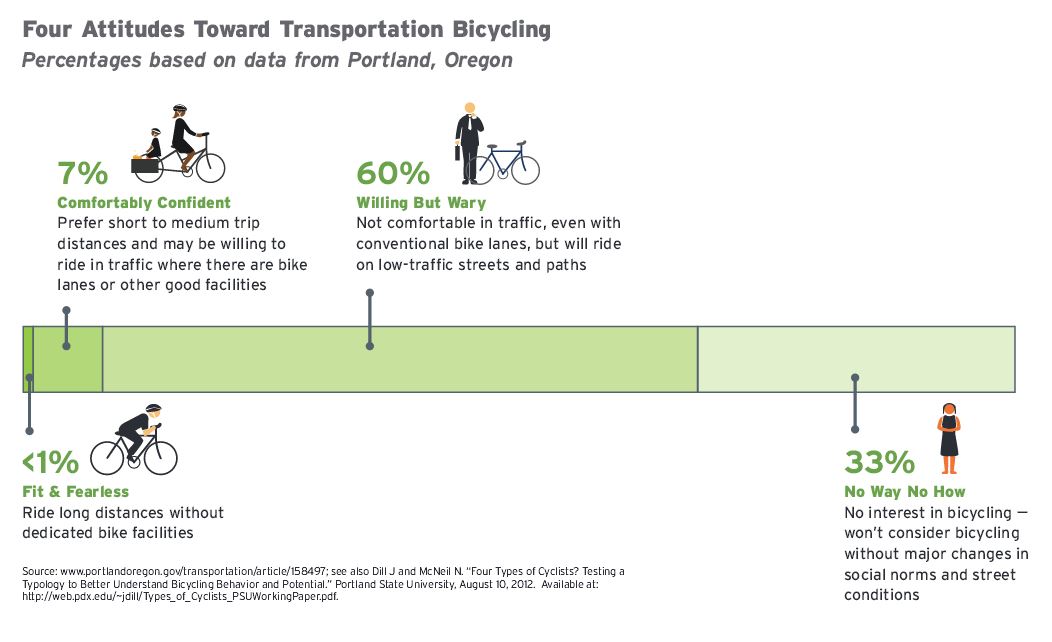