Are Toxic Cooking Fumes Making You Feel Dead Inside? Here’s the Cure.

Your cooking may be hazardous to your health – and not because you’re a bad chef. Find out how your cooking habits could be harming you.

Did you know that every time you cook a veggie burger in your unventilated kitchen, you’re inhaling fine particulate matter, ultrafine particles, nitrogen dioxide, carbon monoxide, and toxic chemicals such as formaldehyde and polycyclic aromatic hydrocarbons? That’s quite a mouthful to swallow along with your impossible burger. 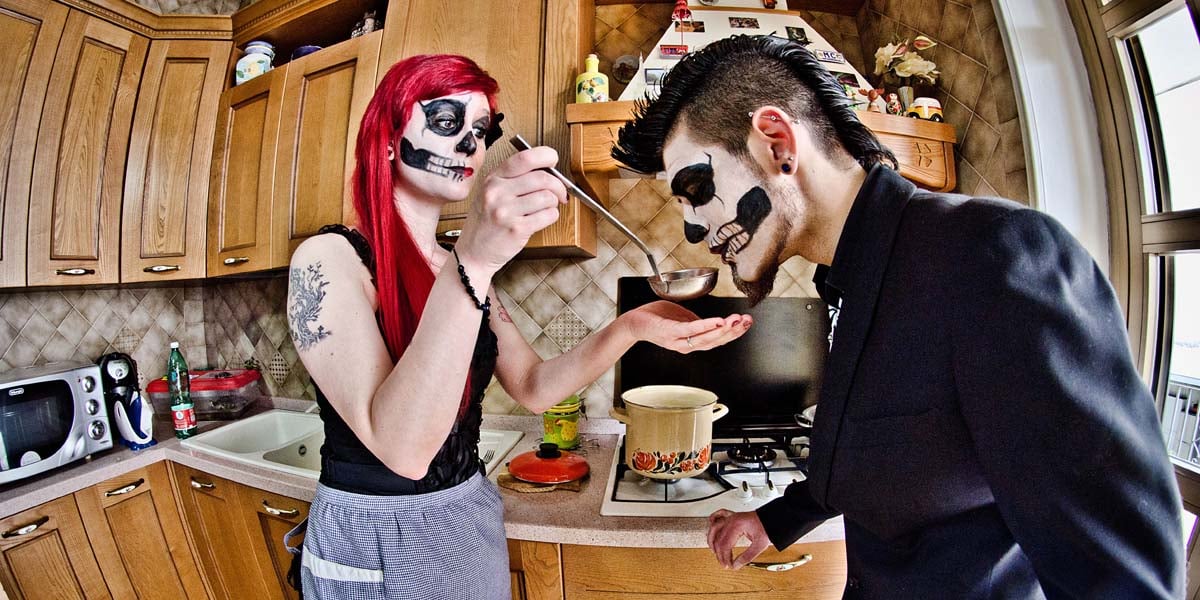 Maybe you prefer baking? While baking in a gas or electric oven isn’t quite as toxic as stovetop frying, studies have found even baking sends large numbers of tiny particles into your air, according to AirBroom, an information resource about indoor air quality.

What Are the Worst Toxic Offenders?

Poor indoor air quality comes from a variety of sources, not just your kitchen. Regardless of where the pollution in your home comes from, the consequences range from irritating to dire. Maybe you just feel headachy after spending too much time in your kitchen, but the U.S. Department of Health and Human Services estimates that 35 million Americans suffer from upper respiratory tract symptoms that are an allergic reaction to airborne allergens. Worse, the EPA found that repeated exposure to bad indoor air quality leads to respiratory problems, heart disease and cancer.

The health risks from exposure to cooking-related pollutants are higher for children, older adults, people with lung disease or chronic respiratory conditions and people with heart disease, says Amy Reed, a staff attorney for the Environmental Law Institute (ELI). In addition, she says, researchers found that people who have been socially and economically disadvantaged are disproportionately affected by exposure to cooking pollutants.

“Because chronic respiratory conditions like asthma increase susceptibility to the impacts of particulate matter and nitrogen dioxide, populations with higher prevalence rates of those underlying conditions bear a disproportionate risk,” Reed says. “We know that Black, Hispanic, Native American and Alaska Native populations bear a disproportionate risk of asthma and that these racial and ethnic disparities can be traced to the structural injustices these populations have faced over time.”

Now that you know about the danger that lurks in your kitchen, what can you do about it?

While cooking with electricity offers environmental benefits over gas, it doesn’t eliminate the problem of indoor air pollutants, according to Reducing Exposure to Cooking Pollutants: Policies and Practices to Improve Air Quality in Homes, a recent report by ELI.

“Cooking-related pollutants include the pollutants generated by igniting burners, as well as the pollutants generated by heating oil and cooking food,” says Reed. “Igniting a gas stove generates certain combustion pollutants that are not produced by electric burners, including nitrogen dioxide and carbon monoxide. However, research has shown that traditional electric burner elements generate ultrafine particles, which pose their own health risks. Electric induction stoves have the least polluting burners, according to research. But regardless of fuel type, the cooking itself generates particulate matter – which is why all cooking appliances need local ventilation.”

Use Your Range Hood, But Keep It Quiet

While you may be tempted to give up cooking and pivot to an endless round of takeout food, there’s a simpler and less expensive alternative: use your range hood fan. According to research, kitchen ventilation can effectively remove cooking pollutants from the indoor air, says Reed.

“Local exhaust ventilation systems for kitchens provide ‘spot ventilation’ for particulate matter and other pollutants generated by igniting burners, heating oil and cooking food,” says Reed. “There is consensus among indoor air quality experts that kitchen ventilation systems, in particular vented range hoods, can be effective at removing these pollutants before they mix with the rest of the indoor air and can be inhaled by the home’s occupants.”

And yet, only 8 percent of people use their range hood regularly, according to a study by the Center for Real Life Kitchen Design at Virginia Tech, while 8% use it almost never and 15% use it only occasionally. The top reasons to skip using the range hood are that it’s too noisy and that it’s not necessary.

“Noise is often cited as a key obstacle to proper use of kitchen exhaust systems–studies have shown that people are less likely to use their range hoods when they find the noise level to be uncomfortable or inconvenient,” says Reed. “This can be addressed in policies requiring maximum sound ratings.”

Include Ventilation In Your Kitchen Upgrade

If you’re remodeling your kitchen or buying a new appliance, that’s a good time to check out your kitchen ventilation options.

“According to ventilation experts, an essential feature of mechanical kitchen ventilation is that the system be vented to the outdoors, not recirculating,” says Reed. “Range hoods tend to remove pollutants more efficiently than other exhaust system types and deeper hoods are generally more efficient than flat hoods.”

The next step is to consider the stove type and dwelling size, since those factors affect how much kitchen ventilation is needed to effectively remove pollutants, says Reed. If you want to get deep into these details, you can review recent research from Lawrence Berkeley National Laboratory that identifies the range of minimum ventilation requirements needed for different combinations of home sizes and stove types.

You should also check out the noise level of a new exhaust fan.

“Fan noise is rated in units called sones,” says Reed. “Current model codes and standards require kitchen fans to operate at 3 sones or less (at the 100-cfm setting), which is around the sound of normal conversation.”

Reed says 2021 is an ideal time for policymakers to address the topic of cooking pollutants and public health because of the increased awareness of the importance of ventilation and the fact that people have been cooking more at home during the pandemic.

“Perhaps even more important, though, is the need to increase public awareness of both the health risks from cooking pollutants and the solutions that are available,” says Reed. “Many people are not aware of these risks or of the ventilation practices and cooking practices that can significantly reduce exposure.”

For example, Reed says, simple steps in your existing kitchen such as running the kitchen exhaust fan or opening windows during every cooking event; cooking on the back burners instead of the front; using cooking oils with high smoke temperatures such as sunflower oil or canola oil; and covering pots and pans to reduce particle emissions from oil and food can help reduce your exposure to pollutants.

Want to feel more alive? Maybe it’s time to turn on the fan and tweak some of your cooking habits for a healthier home.

"Home Life of the Undead" by Sabrina Campagna Live Music Photographer is licensed under CC BY-NC-ND 2.0