For about seven years, Trey Farmer and his wife Adrienne Lee Farmer lived in a circa 1914 Craftsman-style bungalow a few miles west of downtown Austin. With a new baby in their lives, they decided they were ready to turn their drafty home with no subfloor or insulation into something that would be more comfortable and sustainable. 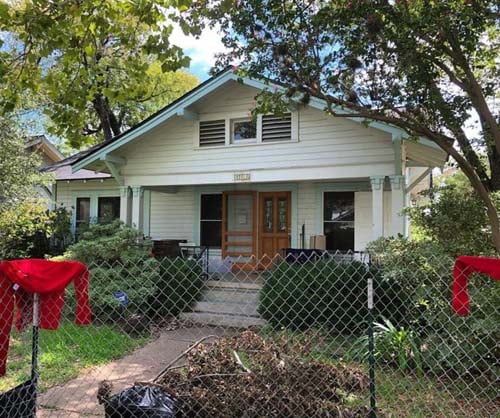 The Farmers’ bungalow was cozy, but inefficient in terms of energy usage and environmental control. Credit: Trey Farmer

Trey, a licensed architect with Forge Craft Architecture + Design and a certified Passive House consultant, and Adrienne, a designer and stylist with Studio Ferme, came up with a plan for a Passive House retrofit.

The Farmers wanted to retain as much of the 1,430-square-foot home’s structure as they could, but the framing didn’t meet code, and they discovered so much termite damage and wood rot that they essentially had to rebuild the house in place. They did so to Passive House standards.

They moved out for 14 months and returned to their completed home in mid-February 2020. 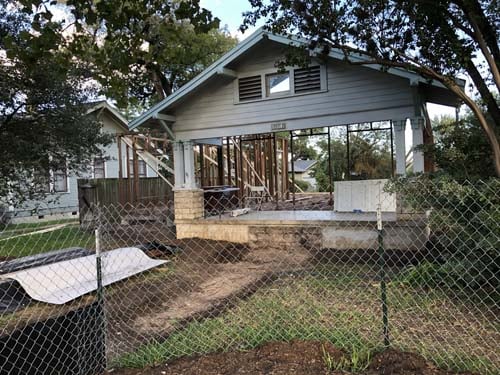 Because extensive structural damage mandated a complete rebuild of the house, homeowners opted to do so to Passive House standards. Credit: Trey Farmer

One year later, a massive cold spell caused power failures and outages that lasted for three days in many parts of Texas. News stories featured homes with icicles hanging from ceiling fans; more than 4.5 million customers went without power. And dozens of people died because of the weather.

The “lost power debacle” quickly became a political issue. Many critics incorrectly blamed the problems on green energy producers in fields, such as wind turbines, hydropower, and solar.

Could sustainable home building solutions have helped people facing this predicament? How did the Farmers’ Passive House stand up to the extreme weather disaster? 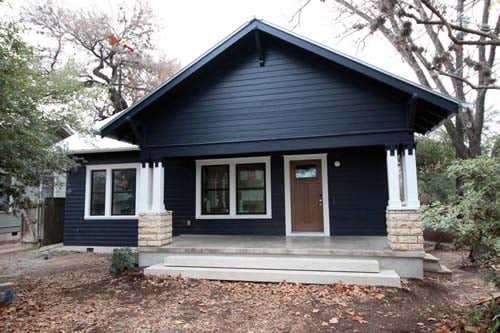 It took 14 months, but the Farmers were able to return to their new and environmentally improved home. Credit: Trey Farmer

The Farmers’ house sits on a corner lot near a train line and is a block away from a major highway. Trey points out that there’s a lot of research showing a correlation between detrimental health effects and people living so close to freeways and freight lines, likely due to the high amount of particulate matter in the air.

“Indoor air quality was a big issue for us, and the house was uncomfortable,” he says. “Really hot or really cold. We had a monster A/C unit outside our window that would churn on and sound like a diesel engine. It was a beautiful old house, but it didn’t feel like it was safe to have a child there.” 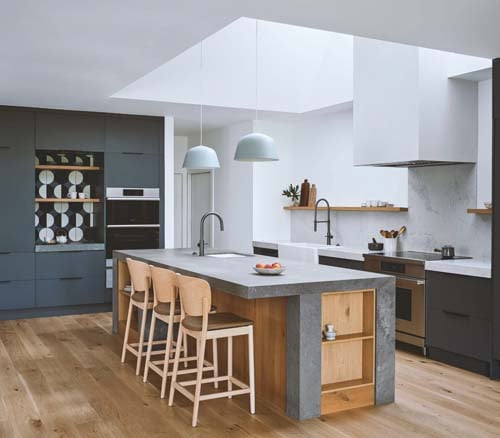 For all these reasons, the Farmers chose to go the Passive House route. Trey’s mentor, architect Hugh Jefferson Randolph, collaborated with the couple on the early design phase.

They did not change the home’s orientation, which runs east-west. They kept the original footprint and added 670 square feet onto the back. The house is now 2,100 square feet.

The original façade and roofline were rebuilt, and all the detailing is the same. “[Doing this] made things easier with some of the permitting, and we wanted to keep the original charm and beauty of the Craftsman home,” Trey says. The back of the house is contemporary, with a flat roof and big windows that take advantage of downtown views. 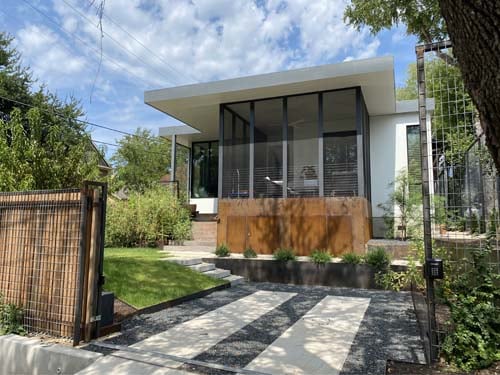 For top-notch air quality and temperature control, it all comes down to air tightness, which the home’s triple-pane windows play a huge part in creating. Credit: Trey Farmer

Passive House standards focus on energy use. “You add more insulation; windows are typically better than code. We have triple pane, and the code here is double pane,” Trey says. “The big lift here is airtightness. This is the thing about Passive House that is the most foreign in our market because it’s not something we really have to think about here.” 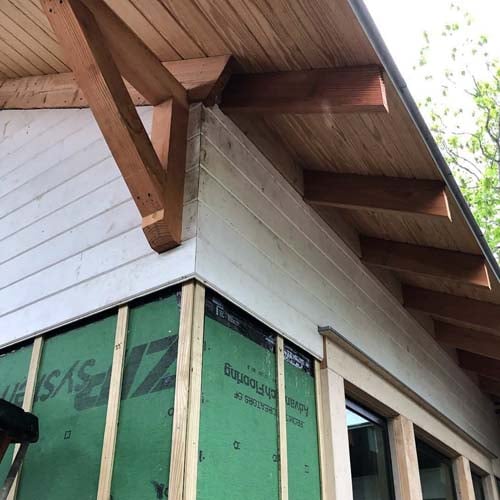 Because of Austin’s climate zone, the codes for airtightness are low—five air changes per hour. “It’s three changes in other parts of Texas and the rest of the country,” Trey explains. “In a Passive House, it’s 0.6. Once you get down to 2 or 1, you get pretty big energy savings because you’re not leaking air that’s been heated or cooled.”

At that level, you also don’t have any dust, pollutants, or allergens coming in through nooks and crannies. “You get a big indoor air quality benefit,” Trey says.

The ERV continuously runs to bring in the fresh air that’s filtered and tempered, so the Farmers aren’t paying a proverbial energy penalty from Austin’s typically hot, humid air. They also have a dedicated dehumidifier, which Trey says he specifies for all his Austin projects.

Passive House guidelines offer targets for heating and cooling demands during peak conditions and total annual demands. The targets vary based on the project type, size,, and location. The house is modeled in 3D and arranged on the site, including all of the window parameters, wall and roof assemblies, HVAC system, and appliances. That model offers an assumption of how much energy the house will use and will later assess if the house is meeting those targets.

The Passive House Vs. the 2021 Texas Winter Storm 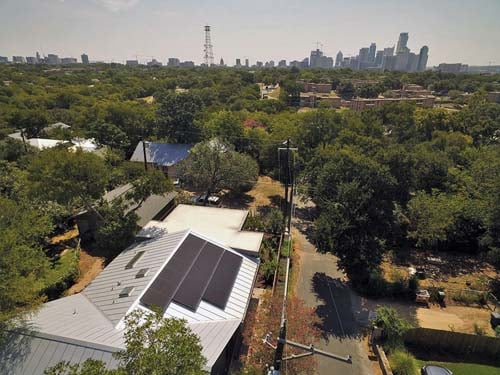 Solar panels on the Farmers’ house were ineffective once the area’s electric grid went offline. A battery backup could have kept the household powered up Credit: Trey Farmer

In mid-February 2021, a polar vortex made it possible for multiple storms to track across the jet stream and devastate communities across the United States. There were record low temperatures in Texas. One storm followed another, and the power demand was overwhelming.

On February 15, the Electric Reliability Council of Texas (ERCOT) began rotating power outages. The Farmers’ home has solar panels, “and the house is intended to be a little more than net zero,” Trey says. But the couple doesn’t have battery backup, which means that “when the grid goes down, we don’t have power.”

If a home were to produce power and put current back into the system during a sanctioned outage, it could endanger the line workers. “If we had battery backup, we could likely power the battery if the grid was down,” Trey notes. “Our house would become an island, and we could draw from the battery.”

There were three ice storms between February 11 and February 20. “It got to single digits on February 14 during the ice storm, which was when everything went sideways with our grid,” Trey says. “They told us there would be rolling blackouts, and then our power went off for three days.”

When the power was still on, the city of Austin had asked everyone to turn down the heat. The Farmers had set theirs at 68 degrees Fahrenheit. February 15, at 1 a.m., the power went out. When Trey woke that morning, it was 9 degrees outside and 62 degrees inside. “At our neighbor’s house, which was identical to ours [before the Passive House retrofit], it was 36 degrees,” Trey says. “They may as well have been living in a tent.”

Outdoor temperatures would be below freezing for a record 144 hours. The Farmers’ house warmed up slightly during the day because of south-facing windows, but on the second night, it got down to 53 degrees inside. The following day, the family went to stay with friends who still had power.

“A neighbor checked on our place,” Trey says. “The coldest our house got was 49 degrees on the third day. It was quite a bit warmer than many people’s experiences.”

The Passive House Vs. Conventional Homes Vs. the storm 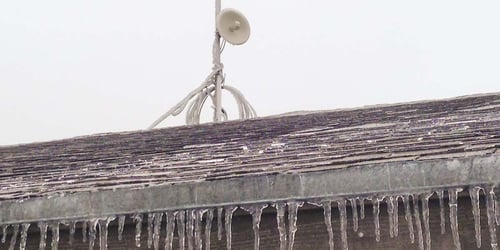 The 2021 winter storm caught everyone by surprise. Most homeowners weren’t prepared for its impact on their lives. Credit: Jonathan Cutrer/Flickr

A February 2020 Rocky Mountain Institute study, “Hours of Safety in Cold Weather: Framework for Considering Resilience in Building Envelope Design and Construction,” looked at how long a home could maintain thresholds of comfort and safety before reaching unsafe indoor temperature levels.

Although it’s only anecdotal, a recent Reddit thread compares three Austin homes, each of which lost power for more than 50 hours during the storm (the third house referenced is the Farmers’):

House 1: 800 square feet, built in 1919 with single-pane windows, balloon framed, no insulation in the walls (although the blog poster had installed R-80 in the attic and R-20 in the floor). It dropped below 40 degrees in a matter of five hours after losing power and would hover around 31 degrees.

House 2: A 2,300-square-foot, 2009 code-built house, this residence features standard spray foam insulation, no attic, and a sealed crawl space. The blog poster confirmed with the owner that it dropped below 40 degrees in 48 hours. “They could float in the 50s with their gas burners at full blast,” Trey notes. 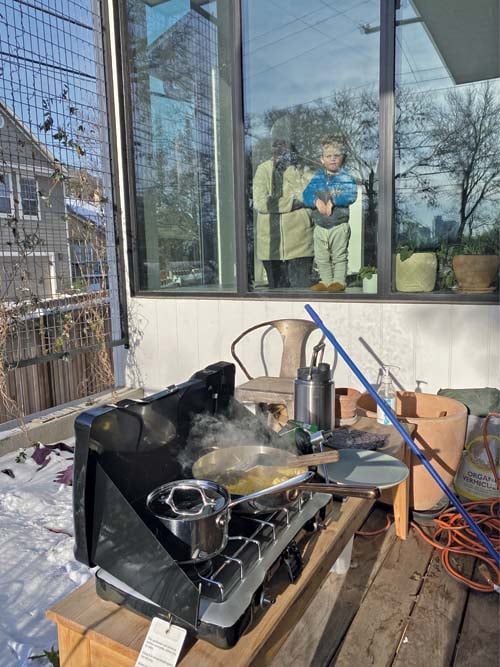 Lack of electricity led Texas homeowners to improvise when it came to keeping warm and cooking food. Credit: Trey Farmer

Appliance placement also makes a difference. The Farmers have an 80-gallon heat pump hot water heater located in conditioned attic space. Trey points out that locating a water heater indoors isn’t common in Texas. “It’s more expensive to put inside because you have to use precious square footage,” he says.

Ultimately, many of the outdoor tanks exploded when the power went out. “Water froze and popped the tanks,” Trey notes. “Once the power came back, people still couldn’t get hot water because plumbers couldn’t get the parts necessary to fix the broken tanks.”

Meanwhile, the water at the Farmers’ house was still hot (90 degrees) two days into the power outage. “And it didn’t explode,” Trey adds.

“While everyday disaster preparedness items are often in consideration, homeowners should also be looking to prepare their structures for these types of weather events. Building with products that offer superior and long-lasting protection from elements like extreme cold, ice, snow, and wind may have afforded better outcomes for those that were forced to shelter in homes without a power source.”

Because their home is all-electric, the Farmers couldn’t even use the stove during the freeze. Trey says that many people he knew kept their houses warm by boiling water on their gas stoves. But there are trade-offs with everything: Hospitals reported more than 300 carbon monoxide poisoning cases in Houston alone.

During the first night with no power, Trey, Adrienne, their toddler, and their 70-pound dog all slept in the bedroom behind a closed door. Trey tracked carbon dioxide levels. Typically, CO2 inside the home is not a problem. A high carbon dioxide level is a rare occurrence, but when it happens, it can be dangerous. “We got up to 3,270 parts per million [ppm]; OSHA limit is 5,000 ppm.” Trey says. To put it in perspective, flying in a plane typically generates about 3,000 ppm.

Trey wasn’t worried. “The house is normally at 500 to 700 ppm, so getting up over 3,000 was a lot, but that was only in the bedroom,” he says. “The rest of the house never got above 1,200, and knowing we were still way below anything that was actually dangerous was helpful.

He adds that they “could have let in more outdoor air, but it was so cold.”

Trey wonders what levels other houses usually are, especially in closed bedrooms, which don’t have ERVs and therefore are not getting fresh air. “But not many people are monitoring these things in their homes,” he says.

Overall, “the house performed well,” Trey says. “It was a good case study and proof of Concept from a passive survivability standpoint.”

This article was originally written for Rise and has been reprinted by permission.Rise is the leading online authority in sustainable home improvement. www.buildwithrise.com has become a trusted locale for persons who want to make better decisions regarding their homes and know the true sustainability of their chosen products. Available resources for homeowners, home professionals, manufacturers and real estate professionals include daily articles, in-depth product pages, national rebate offerings, online courses and inspirational home photos.

Stacey Freed is a Pittsford, New York-based freelance writer. Her bylines have appeared in national trade and consumer publications including Better Homes and Gardens, USA Today, Professional Builder, Remodeling, and Realtor magazine; and online at BuildWithRise.com, AARP, House Logic, Apartment Guide and Trulia, among other places.