Why are Clothes Dryer Lint Fires on the Rise in New Homes?

Deadly house fires caused by dryer lint are on the rise, due largely to the use of extended duct runs for hot air discharge.

About five years ago, the National Fire Protection Association (NFPA) co-funded a study to measure how many fires in the United States begin with clothes dryers or washing machines. They looked at most major forms of housing: single family, multifamily, duplexes, condominiums, townhouses, apartments, and row housing, and what they found, in a nutshell, was the following:

Some of the other findings from that research should not surprise us. Two-thirds of fires started from electrical dryers, not gas models. But statistics show that only about 17 percent of households have a gas dryer, and 71 percent use electric models, so neither technology can claim a better lint fire track record.

Vent Pipe: Too Far to Blow

Despite a better understanding of lint fires caused by dryers, fire experts note that this type of fire hazard started to decline, then began rising again in recent years. One reason is that laundry rooms apparently are being integrated differently by builders and architects.

Most manufacturers set a maximum duct run of about 25 feet, but according to Minnesota-based Bob Tjernlund, a lot of installations now put laundry rooms up to 150 feet from the exterior outlet. That’s probably a commercial installation, however. But even in homes, where square footage has risen to an average 2,322 square feet, excessively long dryer runs have become commonplace. 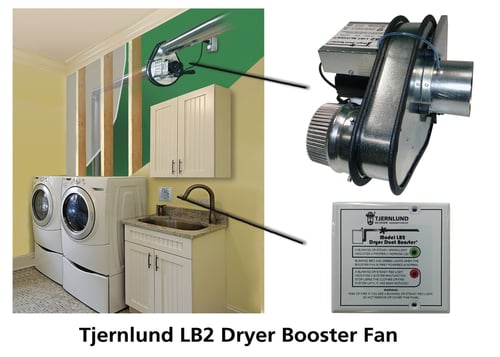 This inline fan has a built-in lint handler and temperature sensor to reduce the risk that lint will catch fire when dryer runs are long or homeowners don’t clean the lint filter after every use.

Tjernlund has developed a low-tech solution to this particular problem. It’s an inline dryer duct “assist” that has a few smart features that make it especially useful when you have to put in a long dryer run. Here’s what the product specs say:

“The LB2 booster fan attaches easily to a four-inch rigid or flex duct and plugs into an electrical outlet. A display panel mounted near the dryer confirms operational status and faults. It communicates via a factory-connected low-voltage cable to an on-board booster fan control. The control monitors pressure and temperature within the duct to operate the booster fan in sync with the dryer and to stop booster fan operation if duct temperature exceeds 165˚F or signal if the duct becomes blocked.”

Another way to head off potential lint fire problems, without long-distance venting and boosting, is to take the European approach—install a non-vented heat pump type dryer. Don’t confuse this technology with consumers simply venting their dryer into living spaces. That’s a recipe for excessive humidity inside the home, poor air quality, and it won’t necessarily prevent a lint fire. For a basic understanding of the new heat pump type dryers, this Whirlpool video offers some information for your clients.

Another key takeaway from research on lint fires: It’s best to avoid inexpensive flexible duct. You know the type—it’s less expensive than semi-rigid or rigid pipe, but also hard to clean without damaging the material, harder to strap up across a line of floor joists, and generally prone to catching lint in every fold. 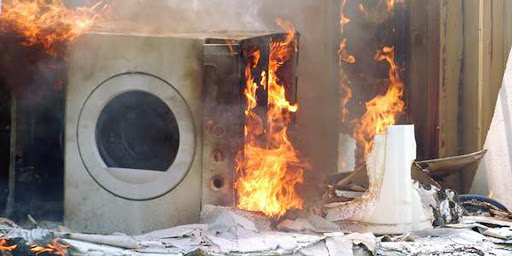 When installing semi-rigid duct, don’t opt for longer-than-needed sections, and leave them compressed. You want to pull the duct open to its full extension, then cut off the excess. Best option of all, however, is rigid duct pipe. It offers few places for lint builds, and if your dryer vent exhaust is sealed tightly to it, especially with a boosting fan, the equipment will blast away most lint buildup before it gets dangerous.

This research found that “soft goods” in the form or lint or overheated clothing caused most house fires. Dryers generally overheat because the exhaust is blocked due to lint buildup. 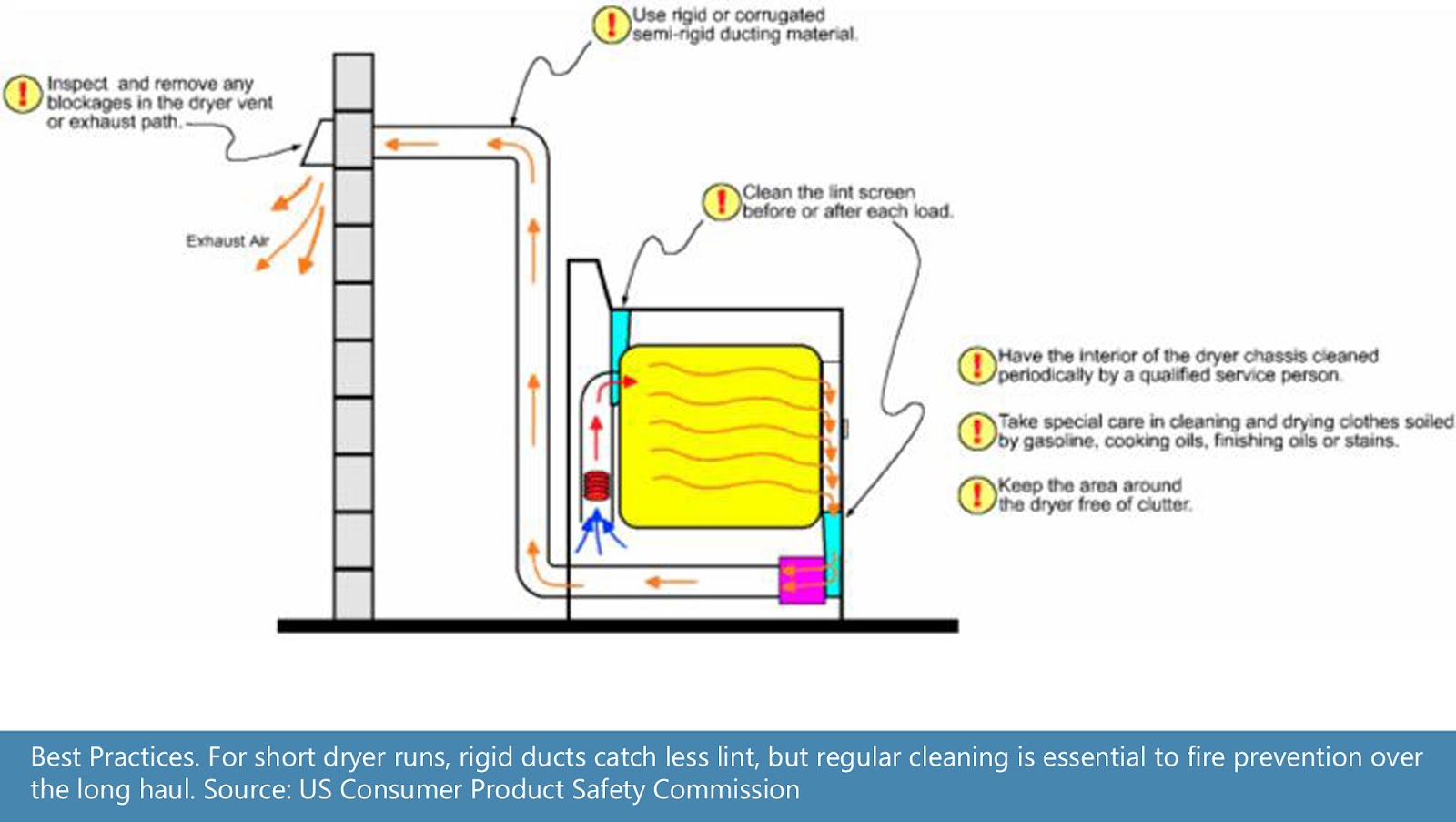