Time to Ask the Hard Questions

Patting people on the back for recycling won’t stop the burn.

I just read a hopeful study about how the public’s view on lifestyles has changed since the pandemic. It found that, more than ever, we want to live more sustainably. For example, when asked if respondents prefer to buy from companies or brands that demonstrate a commitment to sustainability, 86 percent of women say they do.

A slightly smaller number of men, 81 percent, also prefer sustainability committed businesses or brands. Overall, the study focused on the concept of “regeneration” of our wounded ecosystems. It’s a noble idea, one that one-third of the respondents (spread across China, the United Kingdom, and the United States) had never heard of, but almost everyone could get behind.

A study of 3,001 adults in the United Kingdom, the United States, and China found that the vast majority believe corporations have a responsibility to do more on sustainability. Source: Regeneration Rising

That’s all good. But if you look closely at some of the other questions and responses in this survey, you begin to understand why the world seems to be on fire this summer.

For example, when people were asked which things they do to live more sustainably, responses included using up leftovers (77 percent), recycling at home (77 percent), refusing a plastic bag when shopping (65 percent), and avoiding single-use plastic items (63 percent).

You can see where I’m going with this. I’d call this using soup spoons to bail out the Titanic. And it’s not just the answers. It’s the QUESTIONS. Instead of addressing the giant tear in the fabric of Earth’s hull, we’re trying to patch it up with bubble gum and duct tape.

Imagine if this survey had asked really uncomfortable questions about CO2-heavy behaviors:

I could go on. That’s just a sample of the culture of comfort that’s cooking the planet. We know the truth. Virtually every aspect of modern living has its feet in an old fossil fuel dependency.

Energy production and transportation represent the biggest pollution source globally (73 percent of total impact). Homes and businesses produce about 18 percent of that total. Another 24  percent comes from manufacturing and industry. The rest comes from transportation, shipping, and aviation, and “fugitive emissions” released during energy production, such as methane gas.

Clearly, righting our Earth ship will require all hands on deck. Frankly, I’m worried. I’m not sure all of us will survive the transition between the old fossil fuel age and the renewable era that now lies within our grasp. When temperatures hit 115 degrees in Vancouver in June, we saw what may be coming. But we must try.

Throwing a plastic bottle in a recycling bin won’t be enough. We need a moonshot-level effort to cut emissions to zero as quickly as possible. And we need to stop treating people like entitled children: Just because you can run an air conditioner at 62 degrees 24 hours a day doesn’t mean you should. Just because you love your gas stove doesn’t mean it shouldn’t be phased out and banned.

Industry and manufacturers can and must be part of the solution. We need innovations and renovations that result in lower emissions, not repackaged versions of old ideas. 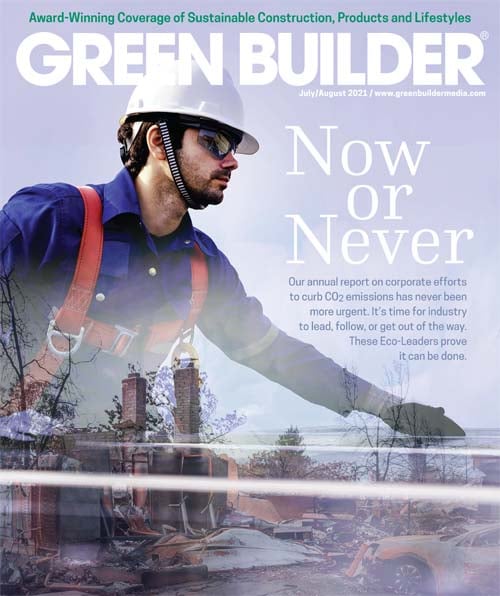 We need investment in change, not platitudes. This might hurt the bottom line in the short haul, with long-term and existential gains. That means zero-waste plants, recycled materials, biodegradable packaging (or no packaging).

The goal is twofold—to “decarbonize” the production of goods, and to create products that decarbonize our homes and businesses (such as solar panels and energy-saving devices). Carbon credits? Sure, they’re part of the mix, but not the end game.

Will we make it? I don’t know. But some things are worth fighting for, like the human race. That’s why we at Green Builder continue, year after year, to honor companies that are taking the fight to halt Climate Change seriously. You’ll find a few of them in this issue. We call them Eco-Leaders. Like you, the nation’s leading builders, architects, and green idealists, they’re doing what needs to be done.

Download the EcoLeaders issue to learn more from forward-looking companies.