Scientists are closing in on a way to turn a home’s wooden frame into a power source.

Green energy is currently generated from several sources: solar, wind and water. You may soon be able to add trees to that list. Scientists at Swiss research institutes ETH Zurich and Empa have biologically modified balsa wood and made it more compressible, turning it into a mini-​generator. When compressed and decompressed about 600 times, a 1.5-centimeter block generates an electrical voltage strong enough to power a biosensor.

According to a report by ETH Zurich, 30 such blocks could power an LCD display, and modified, enhanced versions could one day be used within a wooden frame to help power a home. 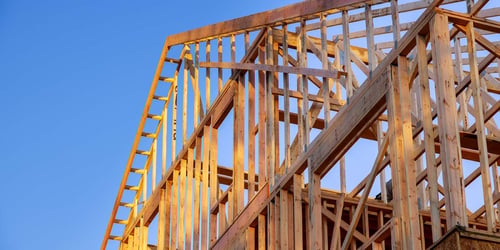 It’s not very powerful yet, but wood used for housing construction may become another way to generate clean electricity. Credit: photos/iStock

Basic wood has a miniscule electrical property, according to ETH Zurich researcher Jianguo Sun. The treated product, referred to by team members as “piezo wood,” generates an electrical voltage 85 times higher than that of untreated wood. “There are clear advantages to such a system,” Sun notes.

However, there are still several steps to go before piezo wood can be deployed as a biosensor, or even as an electricity-​harvesting parquet floor. Researchers are now exploring, in cooperation with various partners, ways to adapt the technology for industrial applications. GB

The study appears in the journal Science Advances.