The electric housing market is about to go boom—and that’s a very good thing.

Once upon a time, Charles Arias thought all the talk about an emerging electric housing market was just that—talk. He says he couldn’t envision a time when people would willingly give up all-too-convenient natural gas water heaters or stoves in favor of electric-powered models that, in his opinion, simply didn’t perform as well. 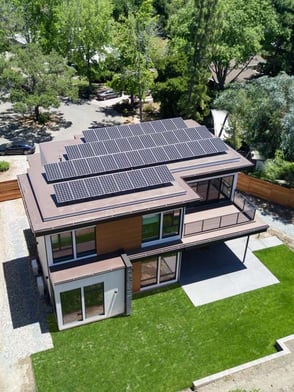 Stanford University Professor Marc Jacobson went all electric with his custom-made home in a successful effort to prove how easy it is to transition off fossil fuels. CREDIT: Bone Structure and Marc Jacobson

Fast-forward five years. He now lives in a Sacramento-area all-electric community and has no complaints. “I admit I was wrong, or at least not well informed about electricity versus gas,” he says. “They are, in most instances, on equal par. My utility bill is even a few dollars less each month, which is pretty good, considering this house is about 1,000 square feet bigger than my old one.”

Expect that pro-electricity scenario to play out more over the next decade, as people become better aware of the benefits of electric power, according to a report by Boulder, Colorado-based marketing intelligence firm Guidehouse Insights (formerly Navigant Research).

Report co-authors Daniel Talero and Neil Strother say electrification technologies are “rapidly becoming more cost-effective and more reliable than fossil fuel systems in a variety of planning scenarios and climatic conditions … although mixed systems predominate, the electrification of all residential energy end uses is desirable for many consumers, and is expected to increase substantially on a 10-year timeline.”

The study projects more than a 500 percent increase in revenue—from $2.4 billion in 2020 to $12.9 billion in 2029—for fully electrified home technologies. The report defines a “fully electric home” (FEH) as one where space heating, water heating, and cooking are electrified through the use of air-source heat pumps (ASHPs), heat pump water heaters (HPWHs), and induction cooking technologies. Insulation and energy management systems (EMS) are not part of the definition, but many FEHs have them, the reports adds. 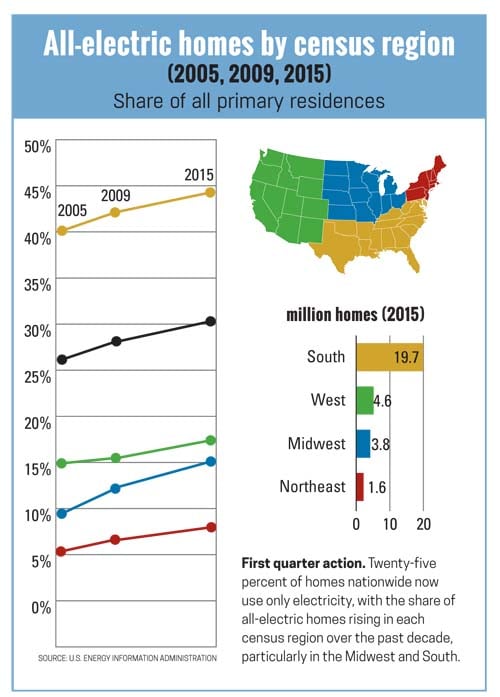 Twenty-five percent of homes nationwide now use only electricity, with the share of all-electric homes rising in each census region over the past decade, particularly in the Midwest and South.

Pushing that growth will be high demand for cost-effective technology such as insulation and heat pump water heaters, rapidly improving cost and performance metrics across climate zones and markets, and high job creation associated with building retrofitting, the study notes.

There’s also a reality clause: Approximately 70 million American homes burn natural gas, oil or propane onsite to heat interior space and water. This generates 560 million tons of CO2 each year—one-tenth of total U.S. emissions, and just under half of all residential end-use energy consumption nationally, according to the U.S. Environmental Protection Agency.

“If you think about that, it makes electricity a more-attractive path,” Arias says. “As long as you know what you want and what’s out there, there appears to be no reason not to at least think about making the conversion, or flat-out buying a house that already says goodbye to [natural] gas.”

That may not be so easy. Natural gas remains the least expensive fossil fuel-based energy source and is the preferred heating tool for 48 percent of all U.S. households, according to DOE. There is also a much larger number of older, gas-dependent homes—about 50 million nationwide to nearly 35 million electric-only—and owners are more likely to stick with what’s been working for them, the agency notes.

It’s primarily a case of money, according to the Rocky Mountain Institute (RMI), which in 2018 released a study on the economics of electrifying home buildings. In general, the study found that the older the home, the more likely it is to function on, and continue to use, gas-powered appliances.

“In many scenarios, notably for most new home construction, we find electrification reduces costs over the lifetime of the appliances when compared with fossil fuels,” the study notes. “However, for the many existing homes currently heated with natural gas, electrification will increase costs at today’s prices, compared to replacing gas furnaces and water heaters with new gas devices.” 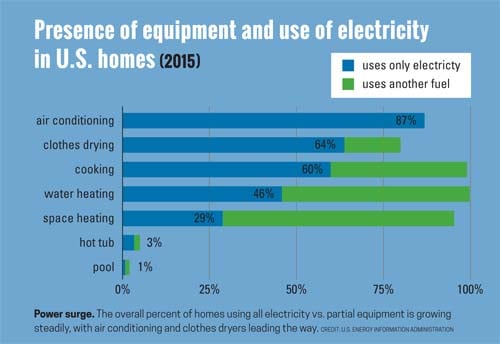 A 2018 study from the California Building Industry Association (CBIA) found that homes with natural gas appliances could cost up to $7,200 to upgrade wiring and electrical panels for the purchase of new electric appliances, average $877 per household each year in increased energy costs, and result in an overall cost increase of $4.3 billion to $6.1 billion per year.

Education can play a big role in helping people make the switch to electricity, according to Talero. As it stands now, many Americans are not aware of the differences between electricity and natural gas for homes.

A survey by FM3 Research, conducted in California earlier this year, found that three-quarters of its respondents have natural gas or propane furnaces and cookstoves. But 62 percent of those respondents said they were unfamiliar with devices such as air source heat pumps or heat pump water heaters. And barely over half—53 percent—were even “somewhat familiar” with an induction cookstove.

This represents an opportunity, according to Matt Vespa, a staff attorney with Earthjustice, one of several environmental groups to commission the survey. “With more information on the hazards of gas, and increased familiarity with advanced electric appliances—through events like induction stove lending programs, city expos and, probably most importantly, training for contractors who recommend appliances—Californians’ demand for this transition will only grow,” Vespa says. 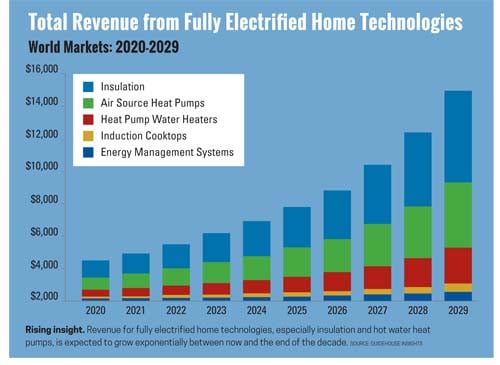 Revenue for fully electrified home technologies, especially insulation and hot water heat pumps, is expected to grow exponentially between now and the end of the decade. SOURCE: Guidehouse Insight

Many Californians may be personally unfamiliar with alternatives to their gas appliances, but they strongly support an array of policies that would allow them to power their appliances with renewable electricity, FM3 Research notes. Seventy percent of the firm’s survey respondents said they want their homes’ power to be generated by green sources, such as solar and wind.

From a marketing standpoint, educating and convincing consumers to opt for electrification means stressing the benefits of having suitable products in the home.

“There is a growing consensus that building electrification is the most viable and predictable path to zero-emission buildings,” notes Betony Jones, an inclusive economics consultant to the UCLA Luskin Center for Innovation “This consensus is due to the availability of off-the-shelf, highly efficient electric technologies (such as heat pumps) and the continued reduction of emission intensities in the electricity sector.”

There’s also a wider-ranging marketing point: electrification’s overall impact on the environment. According to RMI, there are two good reasons for houses to be all-electric: the health of the home’s residents and the health of the planet.

As noted earlier, the use of natural gas in homes contributes to the 560 million tons of CO2 generated each year in the United States. Gas stoves also emit pollutants such as nitrogen dioxide and carbon monoxide into the home, resulting in asthma and other ailments. Everyday indoor activities, such as the cooking of meals, can enable those invisible pollutants to easily reach levels that would be illegal outdoors, according to Bruce Nilles, RMI’s former managing director and current CEO of Energy Innovation, a San Francisco-based environmental policy think tank. 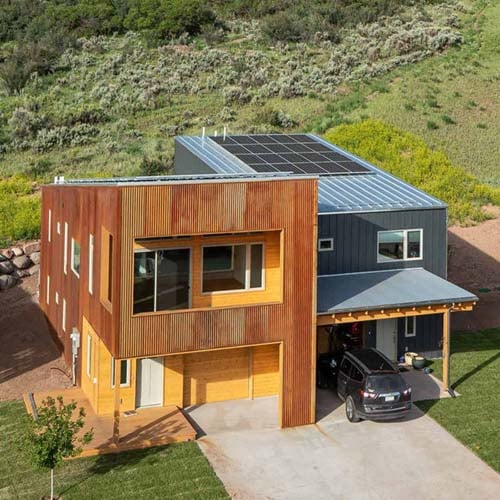 Basalt Vista, an affordable housing community under development in Colorado, provides residents with a chance to experience the merits of green energy appliances and devices. CREDIT: Habitat for Humanity Roaring Fork Valley.

Not only is it safer and healthier to go all-electric, but the time is right, RMI adds. “New technologies such as heat pumps and induction stoves are extremely efficient,” the institution notes. “And with the price of renewable energy falling, people can affordably run their appliances on clean energy.”

All residents receive training and a homeowner’s manual that explains how to interact with the various new appliances and pieces of equipment. But the manual will have a behavioral aspect, according to Habitat for Humanity Roaring Fork Valley programs coordinator and analyst Bo Blodgett. “We want people to realize that they are part of the net-zero system,” he notes, “instead of just thinking about how the system can work for them—or working against it outright.”

Of course, the best example of electrification worthiness comes from an “expert.” In 2017, Mark Jacobson, a professor of civil and environmental engineering at Stanford University, built a 3,200-square-foot home that showcases everything needed to be net zero.

It features a carefully planned daylit design and visible all-electric appliances. There’s no gas line; instead, the house uses electricity that powers mini-split ductless heat pumps, an induction cooktop, and a heat recovery ventilation system. And, the home is primarily powered by rooftop solar with backup batteries.

The overall process works so well, Jacobson can sell up to two-thirds of the energy generated each year back to the local utility. But more important, the dwelling serves as a model for what can be done when someone wants to divorce themselves from using fossil fuels. On the Silicon Valley Clean Energy website, Jacobson notes that he’s spent much of his career working to understand air pollution and Climate Change in order to develop large-scale, clean, renewable energy solutions.

The house, he notes, is a shining example of that goal. “I wanted to practice what I preach,” he says.

Alan Naditz is the managing editor of Green Builder magazine. He has covered numerous industries in his extensive career, including residential and commercial construction, small and corporate business, real estate, and sustainability.