Editor's note: The author of this article endorses Warmboard, a manufacturer of alternative floor heating systems. I reviewed this article before publishing, as did Ron Jones, our company president, and long-time custom builder, and did not notice any glaring overstatements or omissions. If you have comments or feel there are inaccuracies in the article, please contact me or comment on the article and I will review your suggestions—Matt Power, Editor-In-Chief 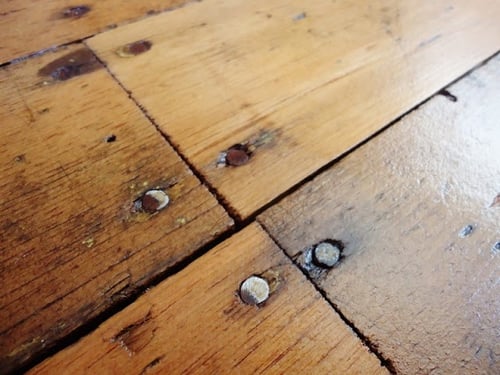 For several centuries wood flooring has been the preferred floor covering in homes, but it was only affordable to the wealthiest individuals in the world. At the tail end of the 19th century, industrialization and manufacturing began to take hold of the industry, redefining it, lowering costs, and in time hardwood became a more viable option for many homeowners. In fact, the use of hardwood floors in the US housing market was near 100% of housing starts between the late 1920’s until the mid 1940’s. After the war, housing starts began to outpace flooring, but it wasn’t until the 1960’s when hardwood floors began their decline, as concrete, tile, linoleum and carpet all became the new trend. It was until the late 1990s that hardwood flooring began to make its comeback. Today, hardwood remains among the most desired floor coverings in North America. ( reference

Gypsum concrete pours out of a hose, is leveled and then dries. It is generally 1.5 inches thick and takes several days to dry completely.

Radiant heating has been used to heating interior spaces dating back to ancient China — 10,000 BCE. With expansive use throughout Asia and in parts of the Roman Empire, modern versions of radiant floor heating didn’t begin to materialize viably until the 1800’s. Copper pipes embedded in concrete became more common (Levittown PA, 1951) and radiant heating began to see a steady growth, thanks in part to famed architect, Frank Lloyd Wright who used radiant in several houses. With the invention (1930’s) and adoption (1960–1970’s) of polyethylene (PEX) tubing, radiant floor heating began to grow in popularity. (reference)

Radiant heat is the most desired form of heating in the world. It is energy-efficient, easy to control and incredibly comfortable. However, the history of radiant heating, from a technology and performance standpoint, is not ideal.

“Striping” refers to the difference in temperature across the surface of the floor. The hottest part over the tube, the coolest between the tubing.

While radiant floor heating was growing in the US, so was a trend called “passive solar”. Passive solar involves a large mass of concrete which absorbs the heat from the sun during the day, and emits that heat during the night. It is very difficult to control, and often would not provide adequate heating. To solve this problem, engineers and architects began combing these two technologies to improve the gaps in performance and add greater control. As a result, the terms “passive solar” and “radiant heating” are often used interchangeably, though they are different technologies. Additionally, the importance of “high mass” (for absorbing heat) is regularly mistaken as a essential component for radiant heating, when in fact it is not.

Thus, radiant heat became synonymous with “high mass radiant heat”, which has many drawbacks. As one can imagine, heating a large mass of concrete takes a considerable amount of time, between 12 hours and a couple of days depending on the size and thickness of the slab. This of course is problematic if you need quickly. Alternatively, if the space is too hot, it cannot be cooled down quickly either.

Next, because concrete is not a conductive material, it not only takes a long time to heat up, but the surface area is often not a consistent temperature. Areas closest to the tubing are hot while areas farther away are cool. There are other drawbacks (weight, drying time…) that should be noted, but they are not relevant to this particular topic.

And so the mayhem began. Excessive moisture in the hardwood caused the panels to warp, too little moisture caused them to crack. Inconsistent surface temperatures caused some parts of the floor to age more quickly than others. Additional layers of plywood slowed the heating process even further, providing inadequate heating. Sleepers made the performance worse, with even more inconsistent surface temperatures. Consumers blamed the hardwood companies for poor products, the hardwood companies blamed the radiant heat for the damage. In the middle were the flooring installers, getting blamed by everyone.

Unfortunately, hardwood and radiant heat don’t mix. A belief that for many in the architecture and construction industries still exists today. And still, many hardwood flooring manufacturers will not warranty their products over ANY radiant heating system.

Fortunately, progress has been made in this arena. The importance of acclimation is well known by all parties, and taking proper measurements and allowing for extra time has helped solved many issues. But the difficulty of installation over high mass still exists. Traditional plank and wide plank installation over concrete are increasingly rare. In its place, engineered planks more resistant to wild temperature swings and can be installed as a floating floor or glue down. However, this still does not address the needs of those wanting high quality wood flooring and radiant heating.

The late 1990s saw the birth of a new kind of radiant heating system — low mass. People realized the benefits of radiant heat were not tied to the standard “high mass” method. Mass was great for storing heat, but not ideal for distributing heat. These low mass systems were lighter and (generally) could transfer heat more quickly. Many still had short comings when it came to installation and performance, but they did make the process of installing hardwood easier. But no low mass radiant option comes close to the industry leader, Warmboard.

Time to Brag a Little Bit

From the beginning, Warmboard was designed to be a completely original concept in radiant floor heating. The panels conform to current building practices, ensuring fast and convenient installations — no slow down on site. Every panel is covered end-to-end with thick, highly conductive 1060 aluminum. This allows the panels to heat up more quickly while using lower water temperatures, resulting in extremely even floor temperatures which won’t damage the hardwood. The thick aluminum also acts as a vapor barrier, further streamlining the installation process.

Warmboard has over 25 million square feet of panels installed, and we’ve never had a claim for damaging hardwood. In fact, with over 40 hardwood companies authorizing their products for use with Warmboard, we’ve become the go-to product for those wishing to use the highest quality hardwood flooring in their project. The vast majority of the homes using Warmboard are also using very high quality hardwoods. With proper acclimation, your investment in hardwood floors is safe with Warmboard.