Rising sea levels will pose a huge risk to affordable housing by 2050.

Affordable housing along the East Coast is already under threat of flooding, thanks to Climate Change-induced sea level rise. However, it will face an even greater risk in the next three decades—possibly three times worse than today, according to a study by research group Climate Central and the National Housing Trust. 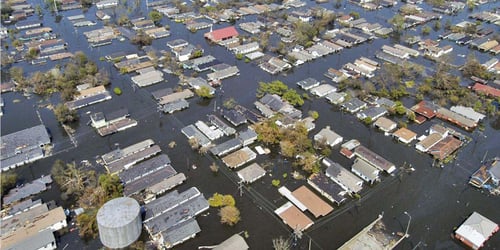 Flooding in coastal cities such as New Orleans—a prominent victim of storms, including Hurricane Katrina in 2005—will be much worse if Climate Change reaches a projected point of no return by 2050. Credit: CAN Europe/Flickr

The report predicts that by 2050, the U.S. will lose 24,519 units due to repeated flooding, mostly concentrated in northeastern and mid-Atlantic states such as Virginia, Massachusetts and New Jersey.

The impact will vary: New York City is expected to see the greatest number of units lost—4,774 —but that total is only 2 percent of the city’s entire inventory of affordable housing. On the other hand, Miami Beach will lose only 314 units, but that represents a 1,074 percent increase in the current amount of threatened housing.

Compounding the problem is the fact that many of the houses threatened are in lower income neighborhoods, where people are unlikely to repair or return to their homes after a disaster, according to Climate Central CEO Benjamin Strauss, the report’s co-author. But future research may help pinpoint the exact areas that are in danger and enable more-effective use of federal or state aid, he notes.