Manifesting an alternate reality that fuses Pleasantville with One Flew Over the Cuckoo's Nest, daycares for the forgetful require some soul searching.

IF A FRIEND HADN'T SENT ME A LINK TO THIS STORY, I would have thought it was “fake news.” But this is no hoax. A place called Glenner Town Square really exists. It’s a faux community, if you will, a partial replica of long-vanished, airbrushed San Diego. The 9,000-sq. ft.  "town" has been carefully constructed to resemble mid- to late 1950s San Diego, built inside a 20,000-sq. ft. industrial building. 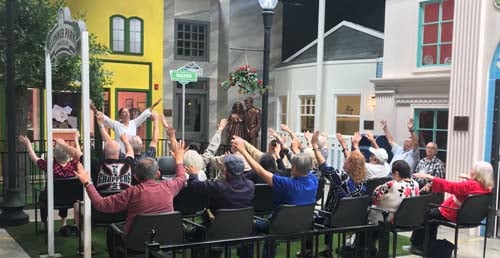 Alternately called “Alzheimers Daycares” or “Dementia Villages,” the concept taps into a field of dementia treatment called reminiscence therapy. This method of “engaging” dementia patients (Alzheimers is a leading cause of dementia), aims to trigger memories from their past and slow their decline into oblivion. And for many patients, it appears to be working—pulling memories out that were buried deep behind their fog of forgetfulness.

The San Diego Times reports “Most of the elderly Alzheimer’s and dementia patients served by Glenner are in their 80s, and their most stable memories are those they acquired when they were 25-35. For these people, walking through an idealized San Diego from their prime years will generate positive recollections.”

The same story recounts anecdotal examples of how a vintage poster triggered one man to recall his World War II experiences. Others begin to tinker on the old Thunderbird.

Is This Heaven or Hell?

It’s hard to fault either the motives or the anecdotal results from this and other dementia villages in Europe. If the goal is to make patients happier, then the illusion seems to work. If the goal is to enrich their lives, or allow them to contribute to society again in some way, that’s a harder sell. A better angle might be that it simply keeps them out of trouble.

Can the life of a person who does not remember things from day to day be enriched? If you’re a fan of the movie “Groundhog Day,” with Bill Murray, you would probably say yes, every moment counts, and good deeds ripple outward. A grandson, hearing his grandfather talk about flying planes in World War II, for example, might gain a cherished memory.

On the other hand, as the popular existential TV comedy The Good Place frequently points out, the dividing line between “the good place” and “the bad place” is not always apparent. In the good place, for example, trapped souls are allowed to eat yogurt, but never ice cream, a seeming indulgence that is actually designed as a mild torture. In The Good Place, (spoiler alert) we ultimately learn that the characters are actually in “the bad place.” The quaint, Disney-esque architecture, bright colors, clown paintings and awkward relationships have been engineered to evoke constant, eternal, low-level stress and anxiety. “Guests” rarely rebel however, because they know they are the “lucky” ones who went to the good place, so they should not complain about the insipid boredom, confined mobility and other hellish aspects of their new existence.

There are many other models from fiction that apply to dementia villages of course, most of them cautionary. The Truman Show, where the main character lives his life in a bubble, observed unknowingly by the public, Logan’s Run, where older people (those who hit the ripe age of 30) are sold a fantasy that they’ll be blissfully reincarnated, when in reality they’re being euthanized, after being shown some relaxing nature videos. And of course, I’d be remiss not to mention the familiar “red pill or blue pill” choice from The Matrix. Given the choice, do you remain inside a pleasant reality of clean air, good food and so on, or escape into “actual” reality, a hell on Earth, where your body is being kept alive by machines inside a wet box? Is actual reality inherently better than constructed reality?

A Long Line of Clients

According to KPBS news in San Diego, the first U.S. dementia village has experienced tremendous demand. Scott Tarde, CEO of the nonprofit George G. Glenner Alzheimer’s Family Centers, says the rollout of more such centers is on a fast track.

KPBS reports that “Tarde is joining with in-home senior care provider Senior Helpers to open 200 more Glenner Town Square villages across the country over the next five years, including a half-dozen more in San Diego County. An 8-hour visit costs $95. Participants must be pre-assessed and enrolled to attend.”

Do the math, and the cost of this elaborate Alzheimers daycare adds up to about $3,800 a week, or $15,200 for a four-week month. That’s a hefty cost, about three times as much as average Alzheimers care in assisted living communities, and not affordable for many, but advocates will argue that for the few who can afford them, these villages make life much more bearable.

The suffering segment of the population sadly, is growing rapidly, so there’s no shortage of clients. KPBS adds that: “For now, Alzheimers/dementia is the third leading cause of death in San Diego, where 84,000 people have the mind-robbing disease. By the year 2030, the number of people in the county diagnosed with Alzheimer’s or dementia is expected to soar 36 percent.”

I’ll be honest. I’m not a fan of Disney’s form of escapism, although I know that’s sacrilege to many of the brand’s fans. Try talking to a Disney fanatic about the negative impacts the company’s narratives have had on young women, or Walt Disney himself’s anti-communist fervor, and their eyes glaze over. And let’s not even mention The Song of the South. Which way to Mickey’s parade?

Dementia villages, on the other hand, take the Disney model and add a societal value. Where Disney’s primary aim is to comfort the comfortable with escapism, Alzheimers villages may reduce suffering for both families and patients. For people who have watched loved ones descend into Hades with Alzheimers and/or dementia, these artificial reality experiments are simply the last, best hope for comforting the afflicted. Making their confused loved ones feel some sense of belonging again, familiarity, or simply reducing their stress levels may be seen as a priceless soul balm.

So forgive me if I sound too critical of the dementia village concept. It is not without merit, particularly in light of the alternatives. As a friend pointed out, the current system of warehousing dementia patients in horrific, sterile nursing home settings, where they may wake up frightened, confused and alone, is heartbreaking. The thought that grandpa might be able to walk into the artificial quaint small town he remembers, sit down in a diner and order a coffee, while talking to staff dressed in period clothing, removes a certain burden from our hearts.

On the other hand, as I’ll touch on below. Not every fantasy Grandpa likes to remember should be indulged.

We seem to be careening toward a future of overlapping virtual realities. Can’t we at least make the narratives kinder, more inclusive and less reinforcing of our worst behavior? To date, dementia villages seem taylored to white, middle class fantasies about the “golden age” of their youth, not the real world of segregated water fountains, “mothers little helpers,” chronic alcoholism, post traumatic wartime stress and the rest.

That doesn’t mean we have to highlight all the negatives in these virtual settings. But rather than engage visitors as two-dimensional caricatures of their former selves, why not let a little actual reality into the scene? Take that World War II soldier, for instance, who may have endured untold horrors during the conflict. In the brightly lit, bloodless world of a dementia village, as in virtual reality war games, his memories may be sanitized and recast, neutralizing the real lessons that his experience may carry to future generations.

I challenge the designers of dementia villages to make them more than “God’s waiting rooms,” --to resist regurgitating nostalgic fantasies of a time and place that never was (for a deeper dive on this, read “The Way We Never Were,” about the real conditions in 1950s America).

Let’s have a library stocked with Popular Mechanics, yes, but also books about the futility of war, Climate Change and Buddhism basics. In the theater, let’s reverse engineer the propaganda of white supremacy, male supremacy and American supremacy with storylines that encourage new brain cells that can replace old, withered (and frankly, unkind) ones.

Why stick to stereotypes? Serve up the familiar with new challenges. Isn’t that the goal? To make people feel more comfortable, at the same time urging them to activate their mental facilities? For some, this might be the deepest they’ve ever looked at their lives and beliefs.

In the next dementia village, let’s install soda stands and 50 cent movie theaters, sure, but let’s also introduce a mayor who’s proudly First Nation. He’s good friends with the chief of police, who is Pakistani and muslim, and a gay couple run the local diner. The T-Bird is being converted to the first-ever solar electric car, and a nerdy testing center staffed with white guys in crewcuts and Latino and Asian scientists is proving "definitively” that cigarettes cause cancer, that seatbelts work and that all human beings are created equal.

There’s no denying the attraction of dementia villages for those who need them. But I for one would like to see them pass into the graveyard of 21st Century oddities soon, rather than become as ubiquitous as Starbucks.

Alzheimers disease research has shown several promising leaps forward recently, so there’s reason to hope. In the meantime, if we must warehouse our aging relatives in La La land, let’s make it a place that their 20-something grandchildren can visit withour cringing.