Range hoods dress up a kitchen, but their function is underappreciated. In a tight house, a high-performance range hood is critical for indoor air quality. Why won’t consumers turn them on?

Kitchen range hoods, with their stainless-steel skins and high-tech lights, are fashion statements that complete the look of a well-designed cooktop or stove. Oddly, many people rarely turn on their hoods and use them for their primary purpose—to exhaust smoke, steam and odors from the house. Vent-A-Hood range hoods use centrifugal blowers, which eliminate the problem of clogged filters.

There are reasons. Range hood fans are noisy, or they are perceived to be. Some people don’t think they need to turn them on—just to boil water, or perhaps fry an egg. When they do hit the switch, it’s often not until the kitchen is enveloped in haze. Then they turn the unit off as soon as the cooking is done.

This behavior contributes to a growing problem. Homes are tighter today than ever, with fewer air changes per hour. Add the popularity of gas stoves, which emit nitrogen dioxide and volatile organic compounds as components of combustion, and the stage is set for poor indoor air quality.

How poor? A study last year in England by the University of Sheffield found NO2 levels in an urban kitchen with a gas stove to be three times higher than measurements taken outside. Airborne particle concentrations also were above safe levels set by the government for outdoor air quality.

This study complements a finding in research done by Broan-NuTone LLC, North America’s leading maker of home ventilation products. Roughly half of consumers surveyed said they were concerned about indoor air pollution, but fewer than 20 percent thought they had a problem in their own home.

“Consumers, in general, don’t really know how poor their air quality is, or how much cooking contributes to the problem,” says Brian Wellnitz, marketing manager for kitchen ventilation at Broan.
In some instances, people recognize they have indoor air quality problems, but mistakenly believe an air filter takes care of the issues, according to John Rose, technical programs manager at the Home Ventilating Institute.

“We know from surveys that they are concerned about indoor air quality, but don’t know all their options,” Rose says.

Turning down the volume

In recent years, though, range hood makers have started to bridge this disconnect. One way is by designing motors that operate at a whisper, especially at lower fan speeds, to hush the too-much-noise excuse.

Another noise-limiting approach, most popular with large, commercial-style hoods, is to place the blower inside the ductwork at another location in the house, away from the kitchen. Either way, customers should look for a low sone rating, which is a measurement of loudness. For comparison, a modern refrigerator emits one or two sones when running. Sone levels for range hoods vary depending on fan speed, but two to five sones is common.

Of course, fan speed is a critical factor. Fan performance, measured in cubic feet per minute, must be able to keep up with the heat generated by the stove or cooktop on its maximum settings. As a rule of thumb, figure one CFM per 100 BTU. And remember that exhaust performance will be greatly influenced by the ductwork, depending on the length, width and number of bends.

Manufacturers also have developed technology that introduces measured amounts of fresh air to balance out the exhaust flow every time the hood is activated. That’s preferable to sucking cold, outside air through holes and cracks in the building envelope, which can create the conditions for mold growth.

Do You Have Enough Make-Up Air?

Negative pressure is created in a home when a range hood exhausts air from the kitchen, a situation that is amplified in a tight house. The solution is to replace the air with fresh air from a controlled source. Make-up air dampers are sized to balance the home’s air pressure, and are wired to operate automatically when the hood is turned on.

In many cases, the damper can be fitted in line with a home’s furnace duct. Duct size will influence exhaust flow and the number of dampers needed. A six-inch round make-up air damper can handle up to 600 CFM, for instance. An 8-inch diameter is good for up to 1,000 CFM.

Check It. A blower door test can quickly tell you whether installing a range hood is likely to require a controlled fresh air intake in the home. 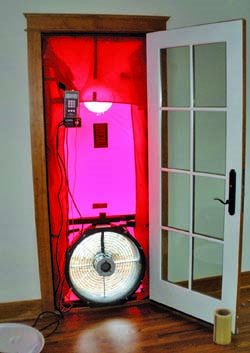 But getting make-up air right can be tricky. Climate, building-air leakage and the exhaust rate of the hood are three obvious factors contractors need to consider. Then they need to calculate duct-system loss and depressurization of the building envelope in calculating the design the flow rate for the hood exhaust.

That helps determine the number and the size of make-up air dampers. The dampers, which typically are between six and 10 inches in diameter, can be installed in exterior walls or, in some cases, set into the return-air plenum of a home’s furnace or air conditioning ducts.

Broan has just introduced an online tool to help contractors determine the correct make-up air solution for their projects. The Web tool reflects the fact that since 2009, model building codes, such as the International Building Code, have included the need for interlocked (automatically activated) make-up air for home range hoods that are capable of exhausting more than 400 CFM. A majority of state and local codes are expected to adopt these standards in the coming years.

“If you’re running a 600-CFM range hood and your home is really small, you’re going to have more need for make-up air,” Wellnitz says. “You’re depressurizing the home more quickly.”

Accounting for make-up air also can head off a potential hazard with exhaust fans—backdrafting. That’s when the negative pressure created by the fan draws combustions gases from a furnace or gas water heater into a tightly constructed home.

It turns out that backdrafting is becoming less of an issue, Rose notes. That’s because most high-efficiency appliances in today’s new homes use direct venting or some other sealed-combustion system, and don’t draw their make-up air from inside.

But the market for new range hoods in existing homes remains huge, with roughly a quarter of the country’s housing stock being 40 years or older. Many older kitchens never had a range hood or any ventilation to begin with.

If the contractor is lucky, the range is on an outside wall. If there are no cabinets above the stove, a wall-mounted chimney is a good solution. Another idea is to build a soffit to hide a duct running to an outside wall.

“The easy ones are in ranch homes where you can go straight up into the attic to a roof cap,” Wellnitz says.

With an inside wall of a two-story home, using a soffit, opening the ceiling, or going into the basement and outdoors are options that will require some “remodeling,” Wellnitz says.

Most range hood makers also offer the option to recirculate exhaust air through a filter. It’s a poor choice that does little to improve air quality, but in some apartments and condominiums, there just may not be any access to an outside wall.

But the bigger issue now seems to be how to educate people about the need to use range hoods, whenever they’re cooking. Quieter motors may help, but as homes become tighter, it’s also possible some day that range hoods will be interlocked with stove and cooktops, just as bath fans are tied to light switches in many commercial and some residential buildings.

“In the future,” Rose says, “you will see range hoods that operate totally independent of the user. They will use sensors that will determine what is happening on the cooktop and then operate at the proper level.”

At Broan, Wellnitz notes that some range hoods already have sensors that turn on the exhaust if the cooktop is operated at maximum output, so heat doesn’t destroy the hood.

“We’ll have to give the consumer the ability to defeat that feature,” he says. “But the technologies are already there to understand what’s happening on the cooktop and operate the hood in the most efficient way to eliminate pollutants and odors.”