FOR TOO LONG, the McMansion was the symbol of success in this country, but Americans are finally coming to the conclusion that bigger isn’t better. The average new home size in America peaked at 2,479 square feet in 2007, according to the National Association of Home Builders (NAHB). Since then, the trend has started to reverse. In 2010, real estate research firm Trulia found that the median “ideal home size” for Americans had declined to around 2,100 square feet, and a third of survey respondents reported that their preference was less than 2,000 square feet.

Two thousand square feet is still a more than comfortable am 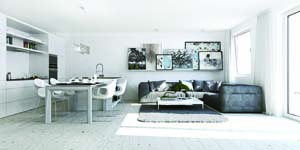 ount of space, but there’s a growing interest in going smaller—much smaller. In July 2014, A&E Network will launch a new series called “Tiny House Nation” that will feature small dwellings ranging from micro-apartments in Manhattan to row homes in Savannah, all less than 300 square feet. The new show, along with the many books, blogs and magazine articles, confirms the health of the small-house movement—a return to houses less than 1,000 square feet—that started in the late ‘90s. It gained traction during the Great Recession of 2008, with more homeowners looking for housing that was more affordable, easier to maintain and eco-friendly. Today, Millennials are feeding the trend with their taste for compact urban living, including micro-apartments no larger than a dorm room. And as Baby Boomers retire and downsize, expect even more interest in small.

But small homes don’t have to mean small lifestyles. Whether designing or retrofitting a 1,000-square-foot condo or a 300-square-foot micro-dwelling, the key is to pack in greater functionality, using every available cubic inch. The slideshow below showcases a number of concepts and strategies: built-ins, niches, items (and even entire rooms) that cleverly collapse, hide away or transform into something else altogether. Not only are these ideas practical, they’re fun, and hold the potential to make a small space fee.

Optimizing Square Footage When designing, building or retrofitting small spaces, look for ways to shrink the footprint of every feature. For example, utilizing pocket doors, which slide into the wall when not in use, saves space in the kitchen and other high traffic areas. Traditional swinging doors occupy up to 14 square feet and dictate furniture placement, whereas a pocket door takes up none. Another space saver is the spiral staircase. A conventional straight-run staircase takes up about 30 square feet of a home’s area; in contrast, a spiral staircase takes up from 9 to 16 square feet. Just be aware, spiral staircases must be of minimum diameter to meet building codes. Built-ins are a classic strategy for optimizing small spaces. While it’s easy to design these into new buildings, ready-made nooks and cabinets can make it easier to integrate these features when remodeling. 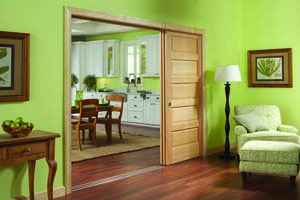 Pocket doors require no square footage, whereas a swing door takes up to 14 square feet. In theory, replacing a dozen swinging doors with pocket doors could potentially reduce a home’s footprint by 120 square feet. That’s less to build, and less to heat and cool. Assuming a value calculation of $150/square foot, the saved space could shave up to $18,000 from the build cost.

Doorways that incorporate converging pocket doors offer flexibility and enhanced traffic flow. For example, opening both doors seemingly creates one large room from two. When not in use, rooms can be sectioned off to save on heating and cooling costs.

Pocket doors also offer benefits for aging in place, as they are easier to access by those who use a wheelchair or a walker to assist with mobility. While a swinging door can be difficult to maneuver around, a pocket door that glides easily into the inside of the wall offers no obstacle.

Double Duty Taking advantage of unique storage options and assigning items with dual functions can make small homes can feel larger. For ideas, take a cue from boats, which by necessity do this especially well. Storage is built in under bunks and benches. Tables collapse and expand. A panel slides over the stove, expanding counter space. The spaces under stairs and beds can be cleverly designed to maximize storage. Incorporating some of these concepts will make even the tiniest micro-unit almost seaworthy.

Collapsible Features When you think about it, many features in the typical home are only used part of the day. Wouldn’t it make sense to tuck, fold or collapse these things away when not in use? Murphy beds—beds that fold up onto the wall—have long been a staple in space-conscious homes. Today’s versions are not only convenient, they’re stylish and green. Other designers have taken this concept a step further, creating entire bedrooms that stow away when not in use. Not surprisingly, many of these concepts are originating in European and Asian cities, where space has been at a premium for a long time.

Transforming Furniture Going along with the concept of foldable and collapsible features is the notion of transforming furniture: Tables that change in size and height, or that transform into sofas or double as artwork. The whimsical qualities of these pieces appeal to our more playful natures, but they’re also highly practical, especially in space-starved micro-apartments or rooms that serve double duty as offices and guest rooms. 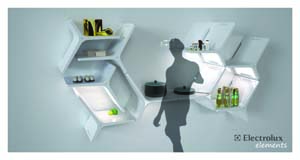 As the trend toward smaller homes and dwelling spaces grows, designers will introduce even more concepts that maximize space and lifestyle. Since 2003, Electrolux has sponsored a global competition called Design Lab, inviting students to present innovative ideas for future households. Matthew Gilbride created the Elements Modular Kitchen for the 2010 contest, the theme of which was the “2nd Space Age.” These modular wall-mounted units can theoretically function as refrigerator, stove, air-conditioner and/or lighting, and can be easily rearranged or reconfigured. The adaptable modules in the Elements Modular Kitchen could be customized for any space, including tiny micro-apartments. The units would be wirelessly connected to each other, and powered via wireless technology applied to the wall, supplemented with solar energy. Incidentally, Gilbride’s concept won third place in that year’s contest, which also featured a robotic tetrapod vacuum cleaner, personal 3D clothing printer and portable washing machine drum.