This panelized tiny home builder has knocked his shell weight down to 2,050 lbs. for an 8 x 24-foot structure, not including trailer. 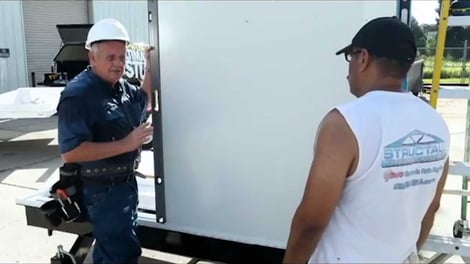 Eddie Beard isn’t all talk, when he asserts that Structall company, where he serves as a senior project manager, is accomplishing what few, if any, other tiny home makers have done--creating  structural insulated panels that make possible a much more lightweight shell for tiny homes.

I met Eddie at the Tiny House Jamboree in August, where he “caused a ruckus,” as he puts it, by suggesting that tiny homes could be built lighter and stronger without need for their own version of the building code. He later tracked me down, after I wrote about how the tiny home movement is having trouble going mainstream, because they operate in code “limbo.”

Eddie offered some great ideas in his response to my editorial, and I think the easiest thing is to share with you his excerpts of my article--followed by his responses. You’ll find some great innovative ideas in here, including how to “anchor” a Tiny Home in a way that satisfies the permanent foundation requirement of the IRC, yet still be able to move the home when desired.

MP: Problem: tiny homes that meet IRC codes for permanent dwellings—often weigh up to 24,000 pounds (12 tons). That’s where many tiny home builders are operating. But many buyers think they’re buying a “mobile” structure.

EB: I am speaking below in a video where I worked on the design elements using the company’s ICESS certified structural steel panels and engineered details. I personally have obtained multiple times a HERS 60 or lower, using a 4" wall and 6" roof. This version in the video is a 4" floor wall and roof.

An 8 X 24-ft. model shown in the video link (excluding the trailer, which was oversized) structural framing was less than 2,050 lbs. for the floor/walls/roof shell, typically the interior walls will use metal studs with very little weight there as well.

MP: Another key element in the tiny house explosion is the entry of RV manufacturers into the market. At the shows, so-called “Park Models” often outnumber “tiny” homes. These 10-foot-wide units, under 400 square feet, feel spacious and appeal to a wider audience. But they too are ANSI-compliant and not built for year-round occupation, nor with extreme storm resilience.

The reality is that there is no code specific to tiny housing, just an appendix in the 2018 IRC that spells out certain details. Creating a new code is a daunting task, but perhaps not impossible. Most THOWs are super energy efficient, operating at or near net zero. With just a little planning, a small solar array can push them into net-zero-plus territory.

EB: I propose to exceed all of the IRC, ICC structural codes and only look to the sizing mandates as being the only difference between conventional or modular construction, and certainly far superior to the HUD Code (House Trailer) codes.  To that end, I have built two 24X24-ft. net-zero homes here in New Orleans, elevated above base flood elevation and "Net Zero, (not counting the intermittent use of an electric tankless water), that I constructed and sold to the owners on their lots for less than $55.00 sq. ft. hard and soft cost with OHP.

MP: The deeper you dig in to the tiny house “movement,” the more you realize that it’s not a fad. It’s the natural, safe harbor from the shifting cultural and financial landscape of the United States. It’s no coincidence that The Align Project, our exhibition home at the NAHB International Builders’ Show in Las Vegas next February, will feature a tiny Kasita home that’s a fraction of the size of the annual “American Home” monstrosity presented by our competitors.

EB: Without changing the basic floor plan the Align Project could easily have a kit tailored for it I'm sure. I/We have no intention of ever building another unit there is simply no profit to be had based on a single unit I only constructed the one shown as proof of concept and learning about the challenges involved.

MP: The reality of the marketplace is shifting. That’s why we’ve written the Tiny Home Tactical Guide, included in our November/December issue. We hope you’ll join us in embracing the tiny trend. High-performance compact homes are what people want, and they’re willing to pay for quality. Let’s make that goal easier.

EB: I have always wanted to produce affordable (obtainable is the new operative word) without compromises in quality or efficiency safe housing for those who needed it versus only those who can afford it.

MP: The right combination of innovative materials, in my view, could make them far stronger, lighter and weather resistant than current RV codes require. I would especially like to see a “hybrid” code classification: A tiny home that can roll out when a monster storm surge threatens, but is anchored to a permanent foundation if the owner wants to stay put. I’m agnostic about whether the code should be part of the current IRC or a standalone specification.

EB: While proprietary in nature, I have a very simple and affordable solution to the code issue, and could easily comply with the IRC, however, there is one caveat, IRC mandates minimum sizes on bedrooms and does not allow for loft sleeping area.

I envision in lieu of FEMA Trailers having municipal (campgrounds for storing the units), on a temp to perm foundation, as a revenue source for those wanting to experience the Tiny Home or just vacation rentals.  These would be Net-Zero LEEDS Platinum 170 mph wind resistant, noncombustible units.

A few years ago, I obtained the patent and marketing rights to a simple 10,000 lb. load bearing foundation, a FEMA-/HUD Code-approved foundation consisting of only three components. I at one time had the patent application pending to adapt to the temp to perm, perm to temp nature of the tiny home dilemma he mentioned in your article.

Note that on the mobile home version, I envision one end left open to allow for the flatbed to bring the unit and set it on top of the foundation for temp to perm attachment, eliminating the RV trailer and adapting a rent-for-hire trailer model similar to boat trailers, with the low wheelbase for the few times you actually move a unit.

The attached foundation guide includes the Anchor Panel in the alternative means and methods.

Here is one of the explanatory videos:

EB (Continued): To me, one of the biggest issues is safety. With the earth banked up against the steel wall foundation, a below grade emergency shelter for tornado/high wind events could greatly reduce the mortality rate associated with HUD code home and actually produce a Tiny Home Structure meeting the HVHZ designation of 175 MPH, and  constructed of noncombustible structural components.

As for costing, the entire shell shown pre-cut in kit form for assembly by DIY or preferably manufacturers would be less than $9,500.00, excluding the tempered glass windows and doors. The foundation, a flat stacked B Deck, would be included as an option averaging $28.00 l.f. for the decking and rebar. This requires 1 cu. ft. of concrete per LF.

The unit I designed traveled over 1,100 miles towed by a standard dually, without a single seam opening up in route.