Non-enforcement has left the St. Johns River roiling with bacteria and excessive nitrogen.

Tallahassee — Six major facilities pump millions of gallons of contaminated wastewater every day into a slow-moving St. Johns River that 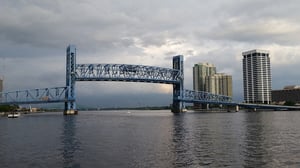 cannot flush out the pollution load, leaving it officially classified as impaired.  While much of this massive discharge is legal, significant amounts violate permit limits without triggering required enforcement or corrective action, according to a series of complaints filed today by Public Employees for Environmental Responsibility (PEER).

The complaints ask for intervention by the U.S. Environmental Protection Agency to redress chronic non-enforcement by Florida’s Department of Environmental Protection (DEP) against longstanding, ongoing, and blatant Clean Water Act violations.  The six cited dischargers are Georgia-Pacific Consumer Operations, and the wastewater treatment facilities of the City of Palatka, City of Neptune Beach, City of Jacksonville Beach, Ridaught Landing in Middleburg, and the Clay County Utility Authority.

Together, these facilities possess state permits authorizing the release of nearly 30 million gallons per day (MGD) of wastewater into the St. Johns River.  The PEER complaints, however, go after their persistent patterns of illegal discharge over and above these legal permit limits, including –

“Florida allows the St. Johns River to be treated like an open sewer,” stated Florida PEER Director Jerry Phillips, a former DEP enforcement attorney who drafted the complaints. “There is no hope for this River to recover unless the wastewater permit limits are actually enforced.”

The state classifies the St. John’s River as a Class III Marine waterbody that is supposed to allow for fish consumption, safe water-based recreation, and healthy fish and wildlife populations.  However, due to excess pollution, the state admits that the St. Johns is “impaired” from fulfilling these purposes.

The cited facilities line the St. John’s from Putnam County, up to Clay County, and to its delta meeting the Atlantic in Duval County. Its water flow rate is so slow that the St. Johns functions as an intra-coastal lagoon system that cannot easily purge itself of excess bacteria, nutrients, and other pollutants. This also makes the River particularly vulnerable to toxic algal blooms.

“Each complaint catalogs not just a coddling but a collusive DEP approach to noncompliance,” added Phillips, noting that half of these permits are up for renewal next year.  “DEP’s systemic failure to enforce compounds the threat to the St. Johns River by rewarding polluters and subsidizing violations.”