The Water Revolution is Here

At current usage and population rates, international demand for water in 2030 will outstrip supply by 40 percent. What's the best strategy?

AS FRESH WATER SUPPLIES DWIDNDLE, nations across the globe will face unprecedented, unsettling, and formerly unthinkable choices regarding water, compelled to make difficult decisions about how to allocate the precious resource.

In the U.S., our population has doubled since 1950 while our water use has tripled. Today, over 50% of our country is grappling with drought. Pressure is particularly mounting on arid western states, with California on the frontlines.

According to Jay Famiglietti, NASA’s senior water scientist, California is, in no uncertain terms, running out of water. “Right now the state has only about one year of water supply left in its reservoirs, and our strategic backup supply, groundwater, is rapidly disappearing,” said Famiglietti. “We’re not just up a creek without a paddle in California, we’re losing the creek too.” 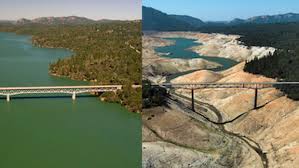 Lake Oroville, California -- 2011 on the left, and September, 2014 on right. Photo courtesy of Paul Hames and Kelly Grow, California Dept. of Water Resources

No doubt, Californians are feeling the impact of extreme drought. Water prices have reached a record high in the state. Last month, federal water managers announced that they will no longer allocate agricultural water to a key state canal system for the second year in a row, forcing farmers in the Central Valley (considered to be one of America’s most important agricultural areas) to abandon formerly productive fields.

And while farming, power plants, and factories are the main users of California’s water resource, imposed mandatory restrictions have been placed on homeowners (for lawn watering), hotels, and restaurants limiting water usage.

Last week, California Governor Jerry Brown introduced a $1 billion plan to deal with the state’s growing drought emergency. Part of the funding will go towards providing short term assistance, food, and emergency drinking water to hard-hit communities. A larger chunk of the funding will go towards longer-term projects, such as the development of water recycling and flood-control infrastructure and the construction of desalinization plants.

But drought conditions and water woes aren’t the purview of California alone. Some of our nation’s fastest growing cities—Denver, Albuquerque, Las Vegas, and Salt Lake—are keenly watching (ferociously guarding?) shared water sources, with a drama unfolding similar to the dance of wolves as they circle a hen house, particularly in light of the fact that the Colorado River system provides $1.4 trillion in economic benefits and 16 million jobs throughout the seven Colorado River Basin States.

It’s all hands on deck for states like California, Nevada, Arizona, Utah, and Colorado when it comes to developing new approaches and solutions to the growing water crisis. Some states, like Georgia, are already responding to hard-learned lessons from the recent past

In 2008, Georgia, Florida, and Alabama narrowly avoided a heated legal battle over water allocation from the Tennessee River. With Atlanta only days away from running out of water, the region was luckily saved by rainfall.

Since hope is not a viable economic or business strategy, Georgia’s Etowah Water & Sewer Authority has taken measures to improve its own water efficiency and help homeowners understand how to reduce their water consumption. The utility is now using smart water technology to improve system performance, reduce inefficiencies, and provide homeowners with data-driven insights about water use to encourage conservation—not to mention the expected $12.5 billion in annual cost savings.

As the growing tug-of-war over limited resources plays out, we can expect to see changes in a number of water-intensive industries. Agriculture is the frontrunner in water usage—in California for example, 80% of the state’s water is used for agriculture.   Biofuels, most often made of corn, is another industry that requires tremendous amounts of water—on average, it takes 100 gallons of fresh water to produce one gallon of biofuel. Fracking is yet another example—the Denver Business Journal claims that the amount of water used each year for hydraulic fracking at Colorado drilling sites is enough to supply nearly 300,000 people a year for household use.

These sectors, and many others, will undoubtedly have to find ways to reduce total water use (for example, by implementing water reuse and reduction practices) or inevitable water shortages will force us to abandon existing practices and head in new directions.

When it comes to residential water use in the U.S., we drink about 1% of the water piped into our homes. The other 99% of this high-quality H2O is used to flush toilets, wash laundry, water lawns and take showers.  This inefficient use of water in under increasing scrutiny, now that water availability has become such a critical issue.

Clearly, it’s time to rethink industrial, agricultural, and urban water use, and we’re looking at nothing short of a water revolution. Fortunately, there are shining examples of innovative approaches to water usage that can serve as replicable models for the U.S. and other countries.

Any intelligent discussion about smart water usage naturally gravitates to Singapore. Once one of the most water-stressed cities in the world, with common water shortages, polluted rivers, and widespread flooding, the densely populated city-state of Singapore has implemented a widespread water conservation program (that encourages industries and households to use water wisely, saving 10% of their water consumption every day), water collection infrastructure, and advanced treatment technology. Now recognized internationally as an emerging global “hydrohub”, Singapore has a thriving industry of 130 water companies and 26 research centers that receive ample funding from both the private and public sectors.

One of the few countries in the world to harvest urban storm-water on a large-scale for its water supply, Singapore has created a “water superhighway”—a comprehensive network of drains, canals, rivers, storm-water collection ponds, and reservoirs that harvest approximately 90% of the nation’s storm-water. Once harvested, water is filtered through the country’s NEWater process, which uses advanced membrane technologies and ultra-violet disinfection to create ultra-clean, safe drinking water. NEWater currently provides 30% of the nation’s water supply, with plans to grow supply to 55% of future water demand.

Singapore engages in extensive water monitoring, using multi-functional water sensors to reduce water loss (sometimes called “non-revenue water”), currently at 4.6%--one of the lowest levels in the world. The city-state has also made great strides in the area of desalinization technology, with two seawater reverse-osmosis plants that produce 100 million gallons of water each day—approximately 25% of the country’s total water needs.

There is increasingly strong evidence that a mega-drought is upon us. Fortunately, our situation presents as much of an opportunity as a challenge. If we’re smart, we’ll embrace the water revolution and take advantage of the moment to create innovative strategies and viable solutions for water management that appropriately address our urgent water shortage issues.