How to Design for Disaster

This new book on how to design and build homes to withstand disasters is a must-read for the building industry.

Boyce Thompson is the author of three books about residential architecture and construction. In his latest, Designing for Disaster: Domestic Architecture in the Era of Climate Change, published by Schiffer in late September, Thompson writes about how to design and build homes that can withstand the growing threat of hurricanes, flooding, wildfires, landslides, and other natural disasters. The cover calls this the most urgent architectural issue of our time. We caught up with the author recently for an interview.

Q: Designing for Disaster seems like an apocryphal title for a mass-market book. Why call it that?

A: A friend came up with the title. In my mind, it states clearly what the book is about. Of course, the trade refers to this as resilient design. But most lay people aren’t familiar with that term.

Q: In your book you link natural disasters to climate change, and climate change to human action. Do you worry that climate-change naysayers will criticize those links? 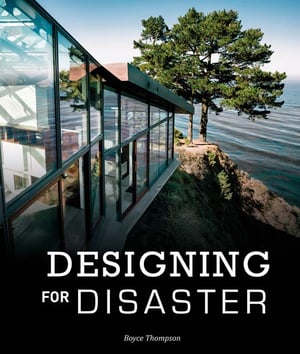 A: No. The turning point in this debate was a report by the National Academy of Sciences, “Attribution of Extreme Weather Events in the Context of Climate Change.” It clearly links climate change to the growing incidence of flooding and wildfires. It’s harder to link climate change to tornadoes and hurricanes, because those are complicated events. But they too appear to be growing in intensity. You can argue all you want about the cause of global warming, but the empirical evidence shows that temperatures and ocean waters are rising.

Q: How difficult was it to find high-quality case studies for the book?

A: It wasn’t easy. If you type “resilient architecture” into a search engine, very little of visual interest comes up. The industry talks a lot about resilient architecture at conferences. But few architects and builders are actually doing it. Some of the early demonstration homes look like concrete bunkers with limited windows and eaves. People won’t buy a book if the architecture isn’t inspiring.

Q: So, how did you find the projects in the book?

A: I had to adopt a liberal perspective. I looked for projects that did a good job addressing one type of natural disaster, then talked to the engineers, and builders on the job to find out what else the project tried to achieve. I found one home designed for fire resistance that also addressed wind- and snow-load issues. Another home was designed with a foundation to resist shifting soils, but the walls were laterally braced for earthquake resistance. Virtually no one today is doing it all, and maybe for good reason. But if I were building a home today, I would want to make sure to account for all local natural threats.

Q; But isn’t that a natural response to local climate conditions? Why should a home by the sea in Nags Head be designed for earthquake resistance?

A: It shouldn’t, though government maps show about 16 states are likely to experience damaging ground shaking within the next 50 years. Many real local threats are ignored because they aren’t covered by building codes. You are playing Russian Roulette if you ignore tornado protections in the most vulnerable parts of Tornado Alley. Other threats are more difficult to pinpoint. Case in point: the Southern California mudflows of 2018. Fire denuded the landscape. Then big rains came, and a month later the land gave way.

Q: To be resilient, homes need to not only resist natural disasters but function on their own in the aftermath. How do the homes in the book address that issue?

A: Most, but not all of the projects in the book include some type of back-up power, typically for key functions – lights, the kitchen. Several employ time-honored passive solar techniques to create wind tunnels or heat sinks in homes to keep them comfortable if the power goes out. Homes in flood regions typically include back flow valves to prevent sewage from backing up into the house. Two houses harvest their own drinking water. No one was keeping food stocks in a safe place. I guess the end is farther away that most people think.

Q: Is resiliency a bigger issue than green building?

A: It is. If you read the literature on climate change, you’ll find that things are going to get worse, much worse in some regions, before they get better. Climate change has been ‘baked in’ by decades of burning fossil fuels, deforestation, and agricultural use. As the U.N. recently reported, “Most aspects of climate change will persist for many centuries, even if emissions are stopped.” What that means is that even if every home for the next 30 years were built to the highest green standard, it wouldn’t make much of a difference. It’s still vitally important to do that, of course. But resiliency is the bigger issue.

Q: Is resiliency a pocket-book issue yet?

A: The evidence is growing that homes subject to flooding aren’t appreciating as fast as other homes in the market. In some cases they are depreciating. I think there’s an opportunity to builders to offer homes that stand a good chance of lasting for generations. The reality is that 100-year weather events are occurring with increased frequency. Home equity is the biggest source of wealth for most families. You want to be able to pass down that wealth to future generations. That’s hard to do if the home is washed away in a flood or goes up in smoke because of a wildfire.

Q: The New York Times recently focused attention on home in Mexico Beach, Florida, that survived Hurricane Mathew. What were the lessons in that house?

A: Several of the homes featured in my book took similar precautions. Like the home in Mexico Beach, they were raised above the floodplain on steel or concrete piers. They were built with a moment frame that resists the lateral force of storm surge. Similar techniques, of course, are employed for earthquake resistance. Any living space below the floodplain is designed to just wash away so that it doesn’t help bring down the rest of the home.

Q: You included some natural events such as shifting soils, sinkholes, and earthquakes that don’t appear to be increasing as a result of global warming. How come?

A: That’s a very good question. I wanted to take a comprehensive look at the impact that the natural elements have on home design and construction. Several scientific studies – and Matt I know how much you love scholarly work – link some of these phenomena to global warming. But a conclusive body of evidence hasn’t been collected yet. You can find studies that link sink holes and termite infestations to global warming. I’ll have to save those topics for another book.

Q: One review of the book noted that most of the projects in the book were high-end custom homes. The reviewer called resiliency the ultimate high-end amenity. What do you think of that characterization?

A: I worked hard to find examples of resilient architecture that were attainable. But they had to look good. I wanted to show that you could have your cake and eat it too, that you could build affordable resilient homes that looked good. The problem with resilient architecture is that at some point livability may suffer. Homeowners need to be able to enjoy view from their home. And their home needs to look good from the street.

Q: One of the most interesting discoveries in the book is how green building can create unexpected resiliencies. Can you give some examples?

A: Several of the homes in book had a strong energy agenda. The attics were often insulated with spray-foam. That means that they didn’t have to be vented. That gives flying embers less of a chance to enter the home during a wildfire. Other homes were built with advanced framing, concrete in particular. That not only improves the energy performance of the house, but it provides lateral bracing in walls.

Q: Is there an opportunity for builders in here somewhere?

Builders are in an ideal position to capitalize on their construction expertise to allay home buyer concerns about the proliferation of natural disasters. Most production builders, of course, will just build to code. Builders who take pride in building a quality home can call out details like anchored foundations, lateral wall bracing, roof tie-downs, and impact-resistant windows and garage doors. Much of what makes a home resilient is hidden behind the walls. Only builders understand what’s going on in there.

The book is available here.