Not only has candidate Clinton demonstrated a mind-numbingly callous indifference to the impacts of fracking, she could end up leading us toward "Climageddon."

Hillary Clinton takes a lot of heat politically, much of it personal, mean-spirited and unfair. Too often the criticism has to do with her personal life, her character and other celebrity-type issues that are frankly irrelevant to her politics, including her recent role as U.S. Secretary of State.

But as primary choices loom, we have just seen the latest reports on global climate change, and they are dour, to say the least. We have crossed the tipping point where runaway, devastating changes to the natural balance are almost inevitable. And the prospect of a Clinton-In-Chief bodes very poorly for our chances of arresting that change. In fact, according the Washington Post, Clinton has actually become more conservative on Energy Policy than she already was.

"Hillary Clinton's appearance at a clean energy convention in Las Vegas on Thursday night turns attention to yet another aspect of the likely Democratic presidential candidate's policy platform for 2016: energy. As usual (and perhaps to her detriment), Clinton is not expected to actually delineate any specific policy goals on energy production. But if she did, it's safe to assume we know what she would say. There's no reason to think Clinton's positions on energy have, in the main, changed since 2008. If anything, they've shifted to the ideological right slightly."

A candidate for president who can't "delineate any specific policy goals on energy production." That's simply not good enough. And thus, Hilary Clinton must be weighed very, very carefully on her environmental record. Forget what she says she believes in now.

Let's look at the facts. And do something for me, open a separate Google windows on your computer and type "Hillary Clinton fracking." 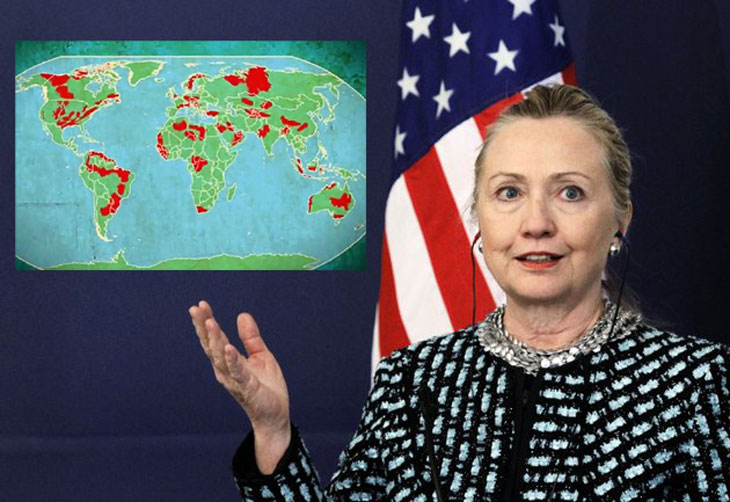 It started back in 2014, with an article just published in Mother Jones magazine details some of Clinton's political wranglings that deserve some severe criticism. According to reporter Mariah Blake, Clinton has been using her State department clout to intervene globally on behalf of giant fossil fuel companies such as Chevron, pushing natural gas fracking on countries that in many cases are resistant to this technology's environmental wake of destruction.

In Bulgaria, for example, the report says, "shortly before Clinton arrived, tens of thousands of protestors poured into the streets carrying placards that read 'stop fracking with our water,' and 'Chevron go home.' Bulgaria's parliament voted overwhelmingly for a moratorium."

But Clinton was not taking no for an answer. She "urged Bulgarian officials to give fracking another chance," and fly in 'the best specialists on these new technologies to present the benefits to the Bulgarian people.'"

But Bulgaria was just the beginning. The article notes that the Obama administration has seen global fracking as a huge, untapped source of  fossil fuel that will allow the U.S. to continue business as usual for another 50 years. They argue that it's cleaner burning and will reduce greenhouse gases, but that contention is hotly debated by environmentalists. The photo at right (we added the map) shows all of the many places around the world where fracking is now being pushed, many of them directly or indirectly thanks to Clinton.

As I've written many times before, fracking for natural gas should be banned outright. It's polluting fresh water sources that could be ruined for centuries. We simply don't have the right to poison the world's fresh water to fuel our addiction to dirty power. And politicians without the moral fortitude to figure that out should be held accountable.

Clinton has now changed her position and says she opposes fracking in the U.S. Do we go by actions or words?

One of the biggest concerns environmentalist have about Clinton is whether she will greenlight the XL pipeline, promoting the use of tar sands oil. Bill McKibben has gone on record saying that if this pipeline happens "it's over." In other words, we will push climate change to the point where the Earth is likely to end our tenure. It's curtains. Clinton now officially opposes the pipeline, but judge for yourself whether you think her resolve will hold. This is from NBC News:

"After months of declining to take a position on the Keystone XL pipeline, Democratic presidential candidate Hillary Clinton says she opposes the construction of the project.

"I think it is imperative that we look at the Keystone XL pipeline as what I believe it is: A distraction from the important work we have to do to combat climate change, and, unfortunately from my perspective, one that interferes with our ability to move forward and deal with other issues," she said during a campaign event in Iowa Tuesday.

"Therefore, I oppose it. I oppose it because I don't think it's in the best interest of what we need to do to combat climate change."

Of course Hillary's rotten record on the environment might seem like sweet news to the "drill, baby drill" portion of the public. But to voters of all party affiliations who see nothing good coming from a Trump or Clinton big oil and big gas bonanza presidency, there are few options. In fact, there's only one. Bernie Sanders. He may be a bit too earnest at times, and you might think him a bit "radical" for the White House (although his record doesn't actually back that up), but he is far and away the candidate with the strongest environmental record and frankly, enough backbone to stand up to big oil and big gas.

The original fracking article about Clinton, The Chevron Communiques, is available through Mother Jones HERE.

Note from the Editor: What Precautions Can You Take if You Live in a Fracking Area?

If you already live in area subject to fracking, you may be wondering what, if anything, you can do to protect yourself and your family's health. One of the most obvious and essential steps is to install a reverse osmosis water filter to clear your drinking water. This won't be enough, if the toxic pollution level is extremely high, but if your water contains trace amounts of substances such as benzene or toluene, reverse osmosis filters can remove these.

Fortunately, the price on these filters has dropped dramatically in the last few years. You can pick one up at Lowes or online for less than $150. They're easy to install, if you're handy. I've included a built in Amazon search for other filtration systems at the boffom of this article.

No amount of filtration, of course, should stand in for the real solution: a ban on fracking. But if you're one of the millions of people worldwide for whom it's already too late, wate filtration is better than no defense at all.--Editor