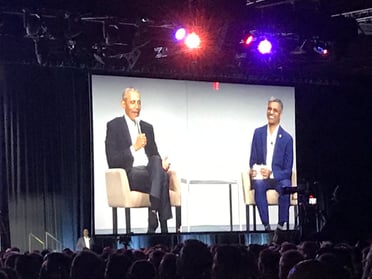 Obama spoke in a panel-style format about at the Atlanta building conference about the perils of hypocrisy--how the smallest inconsistency with our beliefs--such as leaving the lights on in our homes as we go off to work to advocate energy efficiency, can make real progress impossible.

He also spoke about Climate change as an "existential issue."

"It’s not like tax policy," he noted, "That can always be corrected in four or eight years. “[With] climate change you can be too late…. I know of no issue that is more urgent.”

The pragmatic, former chief executive cautioned that climate change initiatives need to be carefully weighed against economics. The big issue facing the world, and local economies, is how to balance sustainability with a “capitalized economy that actually provides everyone with opportunity and is not continually accelerating inequality.”

The president cited building codes as an example. California may have progressive building codes that require high levels of energy conservation. But it also has cities where housing is unaffordable, not just for low-income people put also for the middle class. “Teachers and police officers cannot live in those metropolitan areas because building codes make construction of affordable housing almost impossible.”

The danger, he noted, is that over time, constituencies will give up. They may decide that anything related to sustainability will make homes more expensive. “They are going to move down to Texas where there are no building codes,” he said to laughter from the crowd. “That’s an exaggeration,” he added.

Sustainability advocates need to consider the economic consequences of policy initiatives, he continued. “This is actually a legitimate criticism of those of us who consider ourselves progressive…. [I]f we want to think about sustainability, we have to do it in a way that also is thinking about affordability.”

The trade-off came to a head during negotiations for the Paris Climate Accords, Obama said. World leaders sought to build a coalition that included developing countries with millions of people who don’t even have access to electricity. Leaders of those countries, he said, asked why people living in crippling poverty should go without electricity “for the good of the planet.”

Finding a viable solution was critical. “If India duplicates our ways of doing development…if they use energy as inefficiently as we are, there’s no chance of solving the problem.” The solution was to help developing countries develop clean solar power.

The former president drew a parallel to the presidential center he is building in Chicago. He can amortize the added cost of building to a LEED platinum standard and recover the costs eventually. “I’m in a position to think about that project differently than somebody in their thirties, a young family that’s looking for a starter home. How do they deal with those costs?

“If we are going to get the problem of climate change solved, we are going to have to pay attention of the economics of this so that we can build a broad-based coalition.”

As part of that process, Americans may need to change cultural attitudes about whether bigger is always better. That includes the way they view houses. In this country, he said, “everything’s big. Big Macs, Whoopers. I get that….It’s part of our DNA.”

Bigger isn’t always better, the President reasoned. To illustrate, he told a humorous story about staying in presidential suites in hotels. “I didn’t know what those were like until I became president. They are very big,” he said. In the evening he’d have to go from room to room turning off lights and drawing shades. “It might take me 15 minutes to shut down….

The president said if he is staying somewhere for a night or two a room at The Hampton Inn might suffice. All he really wants is comfortable bed, a shower “with good water pressure,” good shades, and a TV to watch a basketball game.

The president stressed the importance of building coalitions to attack climate change.

“Each of us can do our part,” he said. “We can get rid of plastic bottles. We can drive a smaller car, or better yet bike or walk. We can decide to reduce our energy consumption and our carbon footprint.” But at some point, he said, we need to work collectively through voluntary standards, building codes, and environmental regulations. “When we work collectively it actually makes it easier for everybody to do it alone.”

Obama’s daughters are trying to build a green coalition at home. They have championed the use of reusable instead of plastic water bottles. Yet they often forget to turn off the lights when they leave their room. He says to them, “every time you leave your room, and you are out at your friends’ house for the weekend, the lights are on in your room. What’s up with that?”

If we can work together, the president concluded, “I’m optimistic… that we can solve these problems that we created for ourselves.

"When I was an organizer," he recalled, "We would do a values tree. Tell me things that are important to you: family, faith, kindness; now tell me where you spend your time. How much of that actually matches up?

"It doesn't matter what you say. If you're not spending your time and money on that thing, then you don't really believe it. If we say our children are the most important thing, then we have to match that importance with what we do."

Listen to part of Obama's panel below.

ABOUT THE AUTHOR: Boyce Thompson is a long-time friend and colleague of our Green Builder staff. A well-known speaker and author, his publications include Designing for Disaster, Anatomy of a Great Home, The New, New Home and The Life-Changing Products Exhibit. Contact him at boyce.thompson@verizon.net