ITC's decision has appearance of a win for two American solar companies—but could harm larger industry.

Lawmakers and the solar energy industry spoke out Friday against a ruling by the U.S. International Trade Commission (ITC), which voted in favor of two domestic solar power manufacturers that complained low-cost solar panel imports from China had harmed their businesses.

The ITC's ruling leaves it up to President Donald Trump to decide whether to penalize foreign companies by imposing tariffs on their imports, something that he has already threatened to do, which would increase the cost of installing solar panels. 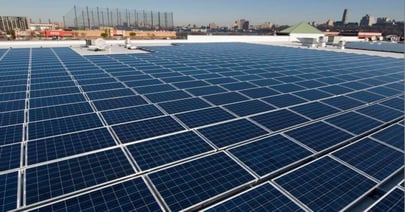 Trump's ability to impose tariffs on solar panel imports could raise prices on the equipment, crippling a burgeoning industry that's been seen as a green alternative to the country's reliance on gas and oil. (Photo: Kimco Realty/Flickr/cc)

While Trump and the coal industry have fretted that the advent of solar power is forcing coal companies out of business, foreign countries have moved forward in developing solar energy, with China already surpassing its goal of installing 105 gigawatts of solar power by 2020. China has also exported solar panels "in such increased quantities as to be a substantial cause of serious injury, or threat of serious injury, to the U.S. industry,"according to the ITC.

As the Los Angeles Times points out, "Only a fraction of American solar companies make the panels. Most rely on imports to keep prices competitive with other forms of electricity. More than 90% of solar installations in the U.S. use imported panels."

U.S. solar manufacturers Suniva and SolarWorld USA have staked a claim in Trump's "America First" agenda, alleging that the cheap imports helped to force them into bankruptcy. But the rest of the domestic industry says the two companies have suffered due to their own mismanagement, and argue that tariffs on solar panels would cause prices of the equipment to skyrocket in the U.S.

"The ITC's decision is disappointing for nearly 9,000 U.S. solar companies and the 260,000 Americans they employ," said Abigail Ross Hopper, president and CEO of the Solar Energy Industries Association (SEIA), which advocates for pro-solar policies.

Andrea Luecke, president of the nonprofit Solar Foundation, which aims to increase access to solar power, said, "This decision brings yet more uncertainty to an industry that has created real value for the United States...The dramatic growth in U.S. solar employment over the past several years was driven by the sharply reduced cost of installations."

Lawmakers from both sides of the aisle had urged the ITC to rule against the two companies.

"At a time when our citizens are demanding more clean energy, the tariff could cause America to lose out on 47 gigawatts of solar installations, representing billions of dollars of infrastructure investment in our states," wrote a group of governors including Brian Sandoval (R-Nev.) and John Hickenlooper (D-Col.) in a letter to the panel on Thursday.