The Cities and States Using the Most and Least Residential Electricity

New Sense data shows Burlington, VT, Madison, WI, and California cities use the least electricity; homes in the Southwest use more and pay more for electricity.

Sense, the innovator in home energy savings, delved into electricity data for more than 4000 real homes across the U.S. to find out who is leading the charge in saving energy—and who is lagging. The analysis drew on real-time and historical electricity usage data for the homes over the course of 12 months. 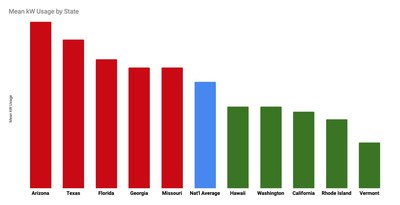 Two cities known for collegiate life, Burlington, VT, and Madison, WI, lead the way in energy savings. Residents in Burlington use the least electricity of any major city—about one-fourth as much as homes in Phoenix, AZ, and half as much as Chicago residents.

California residents don't just talk the eco talk, they live it. Several California cities made the list for the least electricity use, including San Jose, San Francisco-Oakland, San Diego, and the Los Angeles-Long Beach-Anaheim area. The big cities of the Northwest, Portland and Seattle, are home to energy misers too, along with East Coast cities Boston and Providence.

Ranking the Most and Least Efficient Cities

Homes in hot, sunny Phoenix, AZ, use more electricity than any other city—twice as much as Salt Lake City, UT, and more than three times as much as San Jose, CA. Homeowners in Texas cities Dallas, Austin, Houston and San Antonio use about twice as much electricity as residents in Providence, RI, or Denver, CO.  This difference is partly due to the weather—but also shows the opportunities for more efficient ACs, pool pumps and other home devices.

The State You Live In

At a state level, the Green Mountain State, Vermont, truly is the greenest, with the lowest electricity usage per home of any state. Arizona topped the list of highest electricity consumers, with Southern states like Texas and Florida close behind.

Said Sense CEO Mike Phillips: "The electricity consumption for an average U.S. home results in over 16,000 pounds of CO2 emissions per year (source here). At Sense, we believe that most homes can cut that number in half simply by knowing more about their home's energy patterns, and in states like Arizona and Texas, where the average home electricity usage and cost is high, homeowners have a tremendous opportunity to save. When residents have detailed data about their electricity usage, they can take steps to make their homes more efficient, sustainable and eco-friendly."

There are many ways for homeowners to reduce electricity costs, including the following:

To find out how people are eliminating energy hogs in their homes, visit Sense Saves.

About the Home DataSense analyzed energy data from more than 4200 customers' homes across the U.S. whose owners responded to a brief survey. The survey asked homeowners their zip code and other details about their house and electrical devices. With the participants' permission, Sense data scientists then correlated home energy data over the course of a year with their survey responses. Home energy cost source: EIA

About SenseSense is the first company to give consumers engaging, real-time analytics on energy consumption in their homes right on their mobile devices.  Its mission is to make all homes intelligent through its "fitness tracker for the home," helping consumers save money and live safer with more energy-efficient households. Founded in 2013 by pioneers in speech recognition, Sense uses machine learning technology to provide real-time insights on device behavior, even for those devices that are not "smart." Customers rely on Sense for a wide range of uses including monitoring their home appliances, determining whether they left appliances running and identifying major energy drains in their home so they can substantially reduce their energy costs. Sense is headquartered in Cambridge, Mass. To make sense of your energy, visit: https://sense.com.