Free Guide to Solar for Multifamily Residents and Renters

New guide outlines methods to expand solar access for low income communities and rental housing residents as a way to offset the rising costs of energy.

While solar installations on single-family homes have soared over the last decade, most multifamily dwellers are still unable to access energy powered by the sun, including residents in affordable housing communities. 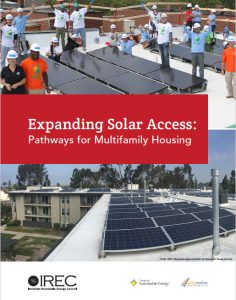 A new guide from the independent Interstate Renewable Energy Council (IREC) offers national insight to help local governments, housing providers, utilities and other stakeholders better understand the possible pathways to ensure more renters and other multifamily residents can benefit from solar.
"As more states and utilities begin to add shared solar programs, it must be a priority consideration to expand solar access for all customers, regardless of housing type or income level," says IREC President/CEO Larry Sherwood. "Low-income households - especially those that reside in multifamily rental housing - have largely been left out of the growing clean energy economy."
Low-income households are disproportionately affected by the rising cost of energy, paying up to four-times the proportion of income on energy costs relative to their higher-income peers, according to the Bullitt Foundation.
"Shared solar programs can enable multiple customers, including renters in multifamily housing, to share the economic benefits of a single solar power system and to receive credits on their utility bills for the electricity generated by that common system," explains IREC Regulatory Program Director Sara Baldwin Auck.
"Given the large percentage of renters nationwide, policymakers need to ensure that policies and programs allow them to take advantage of the benefits of solar and other related clean energy technologies, such as energy storage and energy efficiency," says Auck.
Of the 40 percent of U.S. households who are renters, more than 60 percent live in multifamily housing, according to the National Multifamily Housing Council.
The new guide, Expanding Solar Access: Pathways for Multifamily Housing, outlines two potential paths to enable greater solar access for renters and multifamily residents, and low-to-moderate income communities: (1) on-site shared solar, via an arrangement that allows energy generation credits from a single solar system to be shared virtually among multiple tenant accounts; and (2) off-site/remote shared solar, which allows multiple dispersed customers to share the economic benefits of a single renewable energy system and receive credits on their utility bills for the electricity generated by that common system.
Developed in partnership with the Center for Sustainable Energy, the guide highlights the necessary elements, steps and key stakeholders for each option.
Last year, IREC released a similar publication specifically for multifamily housing in the Seattle, Washington area.
This guide and surrounding work is connected to a related effort in California to increase uptake of solar on multifamily housing using the existing Virtual Net Metering Tariff, which has been available for years in the country's leading solar market but has been vastly underutilized. Led by the Center for Sustainable Energy in partnership with IREC and the California Solar & Storage Association, the Virtual Net Metering Market Development Project is one of 15 Solar Market Pathways projects to expand the awareness of policies aimed at bringing the benefits of solar to more multifamily housing, in California and beyond.
As part of the Virtual Net Metering Project, a new Multifamily Online Solar Marketplace was developed for California to help property owners gather and compare solar quotes, to make going solar simpler.
There are 14 active state shared solar programs in the U.S. across 11 states and Washington, D.C. Five other state programs are in the process of being implemented. In addition, dozens of utility programs are either active or underway.
The new IREC guide was developed with support from the U.S. Department of Energy Solar Energy Technologies Office as part of the Solar Market Pathways program.
About IREC
IREC is an independent national not-for- profit organization that envisions a world powered by clean sustainable energy, where society's interests are valued and protected. Since 1982, IREC increases access to sustainable energy and energy efficiency through independent fact-based policy leadership, quality work force development and consumer empowerment. Our work in nearly every state has built a strong foundation of state and national clean energy policies and best practices, and quality workforce training standards and programs. www.irecusa.org
Share This