Robotic Arms Could Wash Solar Panels, But Do They Make Economic Sense?

A tech company is pushing forward on PV panel cleaning robots, but getting them to a price point that makes sense presents a major challenge.

Note from the Editor: It's true that dirt affects solar panel performance, but the degree of that effect is quite small. For example, a UC San Diego study that I wrote about found that dirty panels produce about .05 percent less energy per day. Rain tends to naturally wash away some dust. In worst case scenario, in an area with persistent drought and dusty conditions, the researchers found that for a typical 5 KW solar installation operating in a drought area, washing the panels would save about $20 (for the whole system) over 2 1/2 months of summer. Even if you extrapolate that savings to a place with year-round dusty conditions, maximum savings from regular cleaning would be about $100 over a year for a 5 kW system. Let's be fair, and amortize the cost of a cleaning system over 15 years. Can researchers create a robotic system that costs just $1,500, and lasts at least 15 years? I'm skeptical.Perhaps there are economies of scale to be had when you design robotics to clean hundreds of panels at once, but my guess is that the robotics costs also scale up rapidly.—Matt Power, Editor-In-Chief 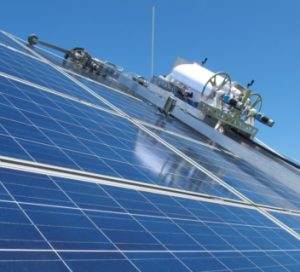 State-of-the-art solar cells are efficient – but are even more so when they are kept clean. A cleaning robot developed by Norwegian researchers enables solar panels to deliver at full capacity.

At a solar energy farm just outside Budapest in Hungary, a cleaning robot is industriously getting on with today’s task. Hundreds of square metres of solar panels are waiting to be cleaned – as quickly and effectively as possible. And without the use of chemicals or any unwanted discharges to the natural environment. The robot is the result of a joint project between Norwegian researchers and the Hungarian company ProDSP Technology.

“It’s a well known fact that solar panels work more efficiently when they’re clean”, says SINTEF researcher and Project Manager Martin Bellmann who, in his day-to-day work, develops what is known as sustainable energy technology. “But what‘s new here is that we’ve developed a robot to do the job. This means that the solar cells are cleaned both quickly and efficiently with as little as possible wear and tear or environmental impact”, he says.

Cleaning solar cells using a robot may sound like a straightforward job – but there’s dirt and there’s dirt. And when a solar farm covering several square kilometres is being cleaned, no chemicals can be used, and there must be no damage to the natural environment. So how do we get to grips with a challenge like this?

Solar cell researcher Birgit Ryningen is examining a set of glass plates in SINTEF’s Daylight Laboratory.  They are all contaminated to order, but in different degrees.

The reason is that the dirt in question has been precisely applied. These plates will now be studied in detail by researchers in order to provide answers about how much the contamination occludes sunlight. This is the final phase of the project.

There really are all kinds of dirt. “The degree to which dust particles and contamination affects solar cells is very location-dependent”, explains Ryningen.

At the start of the project she carried out a literature study to find out how such dirt affected its surroundings, only to find out that existing research focusing on air pollution and dust particles had for the most part been directed on the human body. However, she did find examples of research into the ways in which sand storms impact on solar cells installed in the Middle East. In other words, more research was needed in order to provide scientists with more details about this subject.

“We’ve seen that some dust particles absorb light while others reflect it”, says Ryningen.  “And small particles reflect more light than larger ones, whereas some scale contamination is biological and acts as a kind of ‘sun factor’”, she says. And some scale coatings are thicker than others.

However, what they all have in common is that they must be removed in order for the solar cells to function optimally according to specifications. For this reason, the researchers have developed a cleaning approach that is both fast and sensitive, as well as being environmentally-friendly. And which can deal with all the different types of contamination we encounter.

Cleaning is part of normal operations

The Norwegian company Scatec Solar constructs, owns, operates and maintains solar energy farms in many countries, including the Czech Republic, South Africa, Rwanda, Honduras and Jordan. Last year, the company’s sites generated as much as 791 GWh.  This is equivalent to the consumption of 200,000 average EU households.

“Cleaning is part of standard operational procedures at our solar energy farms, where equipment is cleaned at least once or twice a year on order to avoid soiling. This involves the removal of everything from sand to bird droppings “, she says. “But cleaning frequency is location-dependent. If a farm is located in a desert environment, the panels will require more frequent cleaning because the solar cells become covered with soil and sand”, says Sissener.

She goes on to say that Scatec Solar often employs manual cleaning methods because these are effective and inexpensive, but that the company also uses automated systems.

“Cleaning robots may offer a relevant and attractive solution for solar energy parks located in areas where frequent cleaning is required”, says Sissener.

She also informs us that manual methods are important to Scatec in some situations because they provide local jobs. The method chosen is assessed on a case-by-case basis, and environmental factors such as water shortages and neighbouring agricultural activity are also taken into account.

The robot cleaner currently in SINTEF’s laboratory has undergone a range of tests. Researchers have experimented with a variety of micro cleaning pads, chemicals and air pressure application approaches – all tested, of course, on different types of soiling.

“It is vitally important that we don’t discharge chemical pollutants into the environment”, explains Ryningen. “So we’ve rejected the use of traditional cleaning agents and have ended up using unbelievably small micro-droplets of water that are “sprayed“ onto the glass, almost as a vapour. Then the robot uses a micro cleaning pad that effectively removes the contaminant particles.

Because solar cells can be exposed to wear and tear, researchers have also been working hard to develop methods of controlling the pressure exerted by the robot’s cleaning arm.

“It is vital that the robot doesn’t scratch the sensitive glass surface. Even small scratches can reduce the efficiency of the solar cells”, explains Ryningen, adding that “in theory, this should work on windows as well, which will open up a broader market for us!”, she says.