Several groups and companies have launched initiatives to aid the storm-ravaged island's recovery and its long-term resilience.

As Congress on Thursday approved a $5 billion loan that will further burden the already bankrupt U.S. territory, various solar companies and nonprofits continued working together to offer aid to the storm-ravaged island while also promoting a more sustainable future and resilient energy system. 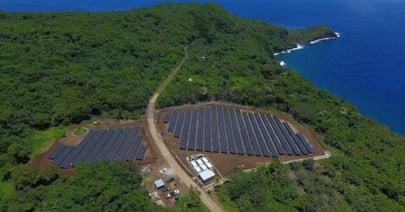 On Thursday, the nonprofit Empowered By Light and Sunrun—the nation's largest residential solar company—partnered with local leaders to install a 4kW solar array with battery storage at the Barrio Obrero fire station in San Juan. A second system will be installed at another fire station on Friday.

More than 90 percent of the island's power grid has not been restored since Hurricane Maria struck last month. The commonwealth's power system was already hobbled by financial difficulties long before the hurricane devastated the island, and the federal government has been widely condemned for its slow and inadequatedisaster relief efforts.

"It appears the federal emergency response is focused on diesel to repower the island," said Marco Krapels, co-founder of Empowered By Light, who led the effort. "We wanted to demonstrate with real projects—with immediate impact, that renewable energy technology is available now and it's a much more resilient alternative to diesel."

"Unfortunately, extreme weather events will continue to impact the communities where we live," said Lynn Jurich, co-founder and CEO of Sunrun. "In the wake of recovery, it's critical to rebuild smarter with resilient, distributed power like rooftop solar and storage."

"I think renewable energy solutions should be integrated into any emergency relief effort," said actor and activist Mark Ruffalo, who is also an Empowered By Light adviser. "Energy from the sun and wind are abundant, and can be used to power Puerto Rico."

Empowered by Light and Sunrun are also working with the nonprofit GivePower as well as Zero Mass Water and several individuals to provide the island's remote communities with solar-powered water desalination systems, water production systems, and portable solar-powered units.

The Solar Energy Industries Association (SEIA), a national solar industry group, has also sent aid to the island in recent days, as has Light Up Puerto Rico, a group, led by two Puerto Ricans, that formed after the hurricane.

"Everything is needed down there, but we are trying to help out in a unique way," Brad Creer, president of New Star Solar, told CNBC.

Creer also said he was excited to see that solar companies were "getting together" and "putting all our competition aside" to provide relief to the island.

"The Tesla team has done this for many smaller islands around the world, but there is no scalability limit, so it can be done for Puerto Rico too," Musk tweeted, adding that the decision to transition the island to a renewable system "would be in the hands of" local government.

On Monday, Rosselló told MSNBC that the destruction is an opportunity to rebuild Puerto Rico smarter and "transform" the island.

"We can't be talking about just putting back the old grid again," Rosselló said. "We need to be talking about how we're going to innovate, how this destruction gives us now a platform to not just rebuild, but to transform Puerto Rico."