Replacing natural gas (methane) with clean electricity, particularly for heating and hot water production, will slash greenhouse gas emissions from California's single-family homes by up to 90 percent within the next three decades and save consumers money in the process, according to a new analysis released today. The study confirms electrification is a vital and cost-effective tool in reducing climate and toxic air pollution from gas combustion in buildings, which account for a quarter of the state total climate emissions.

About half the pollution from California's buildings comes from burning gas, primarily for heating and hot water. The state's ability to achieve its goal of carbon neutrality by 2045 will require the majority of buildings to shift that energy usage toward the electric grid powered by renewable electricity. That means outfitting new homes with high-efficiency, electric-powered heating systems and water heaters, and retrofitting existing homes when the old gas equipment needs replacing.

The new study—conducted by research firm Energy+Environmental Economics (E3) and jointly funded by Southern California Edison, the Los Angeles Department of Water and Power, and Sacramento Municipal Utility District—is the most comprehensive effort yet to assess the impacts of California building electrification for the climate, consumers, and the grid. Covering six climate zones (San Francisco, San Jose, Sacramento, coastal Los Angeles, downtown Los Angeles, and Riverside) that represent about half the state's population, the analysis forecasts dramatic emissions, pollution, and cost reduction benefits.

The study focuses on electrification as the primary pathway to decarbonize buildings. Another pathway, using renewable gas instead of fossil gas to fuel furnaces and water heaters, is also being considered in California. However, there is very little renewable gas available today (less than 1 percent of the gas used in California versus 34 percent renewable electricity in 2018), and the potential future supply from sustainable sources is limited. It is also much more expensive than fossil gas, while renewable electricity is getting cheaper than electricity from gas power plants. When produced sustainably, renewable gas can play an important role in reducing emissions, but given its limited availability and high cost, it is unlikely to ever replace a large enough share of the state’s fossil gas use. The scarce supply may be better used in harder-to-decarbonize sectors like industry. 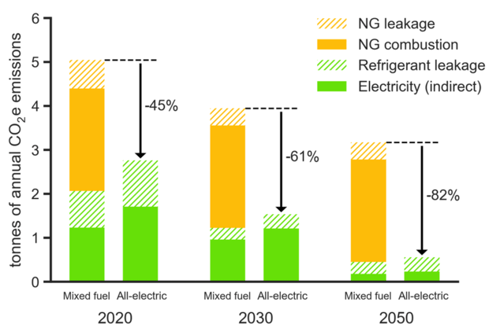 For new construction, going all-electric will save money compared to building a gas-heated home, with net savings of $130 to $540 per year. Among existing homes, 87 percent of those with air conditioning (about two thirds of the market) also would end up saving on utility bills by switching from a gas furnace and air conditioner to an electric heat pump system that provides both heating in winter and cooling in summer.

The study's conclusions are based on technologies available today at current costs, without any incentive programs. As the market transforms and costs come down, electrification will become cost-effective for even more Californians.

California began to focus attention on this issue last year with two building decarbonization laws, one requiring an assessment of how to reduce building emissions by 40 percent from 1990 levels by 2030 and the other designed to jump start the market for clean heating technologies. Accordingly, the state's energy commission for the first time put cutting pollution from buildings as a front and center priority in its biannual policy report earlier this year.

Despite the benefits of electric heat pumps and other technologies, they face hurdles in the market. Upfront costs for equipment and installation can be higher than those for gas-fueled counterparts, while customers and contractors lack awareness of the options. The E3 report offers five recommendations aimed at removing these barriers to adoption:

While not covered in the study, zero-emissions homes with clean electric heating and hot water will also help clean up air pollution, especially in California’s regions most affected by smog: according to the California Air Resources Board, buildings are responsible for 107 tons of nitrogen oxide pollution (NOx) daily, just short of light duty vehicles emissions (118 tons per day), and more than five times that of power plants (18 tons per day).

To achieve the high adoption rates for electrification needed by 2050, the analysis notes, at least half of existing residential buildings, or more than 7 million homes, will require retrofits. That is a huge task. However, every single home inhabited today will need to replace worn-out equipment at least once in the next 30 years. These natural replacements are an important opportunity to help homeowners upgrade to healthier, safer, and lower-bill electric alternatives in a cost-effective manner.

This article was republished with permission from the NRDC and was originally published here.