Minnesota is the only Midwest state ranked in the top 10 of the annual American Council for an Energy-Efficient Economy’s State Energy Efficiency Scorecard.

Last year Minnesota ranked 10th on the scorecard and was, once again, the only Midwest state to make the Top 10. 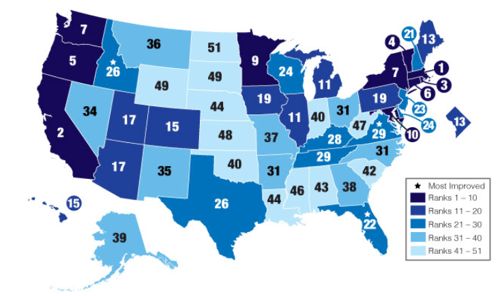 The state’s largest city, Minneapolis, came in 11th among major American cities, joining Chicago (7th) as the only Midwest representatives in the top 15.

In Minnesota the ACEEE found the following in its data crunch:

Minneapolis received high marks for government policies, energy and water efficiency efforts. On the other hand, building policies scored poorly due to few initiatives for green buildings, retrofits and audits.

The transportation score was low, too, despite a growing transit network. The city ranks in the third highest transit funding category and has no incentives for electric vehicles.

The scorecard is in its 11th year.